Accord defines exclusive zones for exploration, use of marine resources and fishing rights. 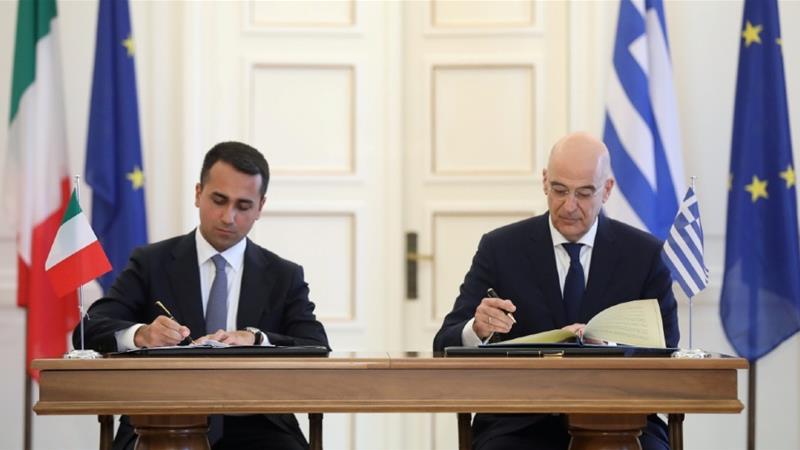 Greece and Italy have signed an agreement demarcating their maritime boundaries, amid tension in the Mediterranean region over rights to natural resources.

The agreement signed on Tuesday in Athens tackled an issue that had been pending for 40 years, Greek Prime Minister Kyriakos Mitsotakis said in a statement.

“Today is a good day for Greece, Italy, Europe and the entire Mediterranean,” Mitsotakis said, adding that the deal meets international law and the United Nations Convention on the Law of the Sea.

Signed some seven months after Turkey inked a similar deal with Libya’s internationally-recognised government on the southern side of the Mediterranean, Tuesday’s agreement demarcates the exclusive economic zone – the maritime area in which a nation has the right of energy exploration and use of marine resources – between Greece and Italy in the Ionian Sea.

It also sets out fishing rights, Greek Foreign Minister Nikos Dendias said after the signing ceremony alongside his Italian counterpart, Luigi Di Maio, although full details were not immediately available.

Earlier, Dendias explained that the accord confirmed a 1977 continental shelf agreement with Rome “and the right of islands to have maritime zones”.

This point is of particular importance for Greece in its tense diplomatic standoff with Turkey, which denies that islands have such rights.

Last November, Ankara signed a maritime boundary agreement with Libya’s Tripoli-based Government of National Accord which claimed extensive areas of the sea for Turkey.

Analysts saw the move as part of a Turkish strategy to avoid exclusion from the gas exploration scramble in the region. The deal carves out a corridor of waters that cuts diagonally across the southeast of the Aegean Sea and claims what Greece says is its own maritime jurisdiction.

On Friday, Turkey announced that it planned to start drilling for hydrocarbons in the eastern Mediterranean in three or four months, a move Greece condemned as “illegal”.

Athens argues that the November deal fails to take into account the island of Crete.

“The European Union and the United States and Russia, plus many regional players such as Egypt and Israel have denounced the Turkey-Libya agreement and have called on Ankara to carve out a more conciliatory delineation of its territorial zone waters with Greece,” Al Jazeera’s John Psaropoulos, reporting from Athens, said.