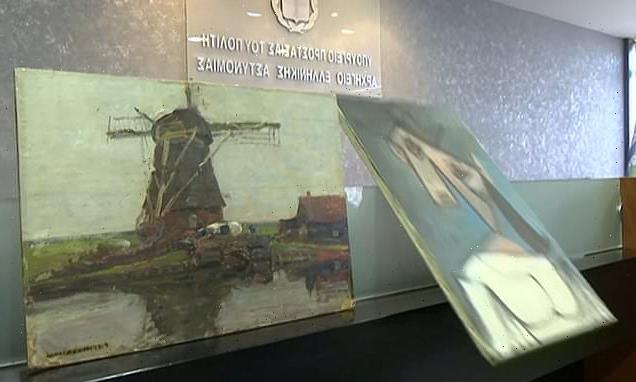 A stolen Picasso painting tumbled to the floor while on display with Greek police yesterday after it was found in a ravine.

The work, titled Woman’s Head, was stolen in an art heist from Greece’s National Gallery in 2012 but was recovered from a ditch in a forest just days ago.

Greek police put the recovered artwork on display but it slipped from its position atop an unstable shelf, risking considerable damage.

An officer was forced to pick up the painting and sheepishly replaced it on the shelf.

A 49-year-old believed to have lived between Greece and England has now been arrested and later confessed to the heist. 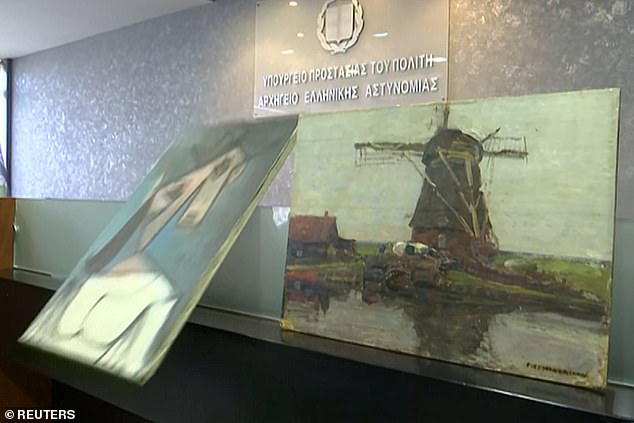 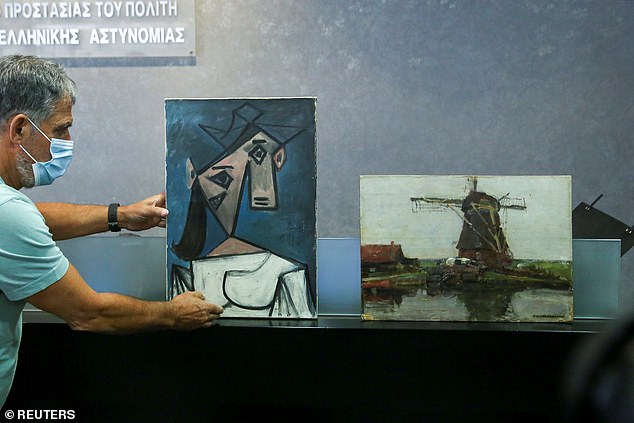 The officer sheepishly plucked the painting off the floor and nervously replaced it on the shelf alongside ‘Stammer Windmill’ by Dutch painter Piet Mondrian, which was also found with the Picasso

Culture minister Lina Mendoni on Thursday criticised the accident but insisted both paintings ‘appear to be in good condition’.

The Spanish master gifted the work to the Greek state in 1949 in recognition of the country’s resistance to Nazi Germany during the 1941-44 occupation.

The painting, which may have been offered on the black market for £15million according to police sources, was stolen along with two other high-profile artworks. 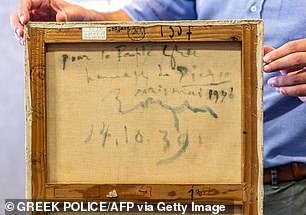 The words ‘for the Greek people, a tribute by Picasso’ are inscribed on the back of the painting. It was gifted by Picasso to Greece in 1949

One, a sketch by 16th-century Italian artist Guglielmo Caccia, better known as Moncalvo, was damaged in the heist and flushed down a gallery toilet according to state television, something the suspect has reportedly confessed to.

The other, called ‘Stammer Windmill’ by Dutch painter Piet Mondrian, was also found with the Picasso.

‘Today is a special day, (a day of) great joy and emotion,’ Mendoni told reporters.

She said the painting would have been ‘impossible’ to sell as it had a personal inscription by Picasso on the back – ‘For the Greek people, a tribute by Picasso.’

But police sources told ARTNews it was possible the work had been offered for £15m on the black market but failed to find a buyer.

The self-confessed thief said he had initially stashed the paintings at home, but recently hidden them in a gorge in Keratea, 28 miles southeast of Athens.

The 2012 heist at the National Gallery, Greece’s largest state art collection, lasted just seven minutes, but the planning behind it was meticulous.

The break-in saw the sole guard distracted by alarms that were set off throughout the night until he disabled the system.

He then went to check one part of the museum while the burglar slipped in through an unlocked balcony door elsewhere.

In the short time he was inside, he was able to strip the Picasso and Stammer Windmill from their frames and escape.

It was originally believed that two men broke in, cutting the paintings from their frames, but police have arrested just one person, the 49-year-old Greek construction worker who has not yet been named, in connection with the case. 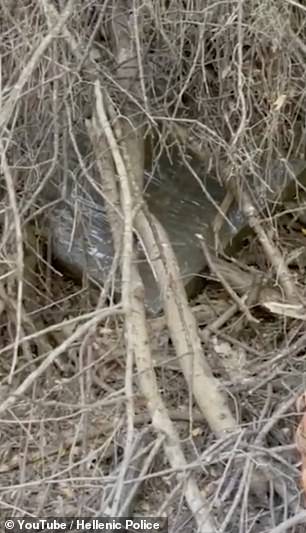 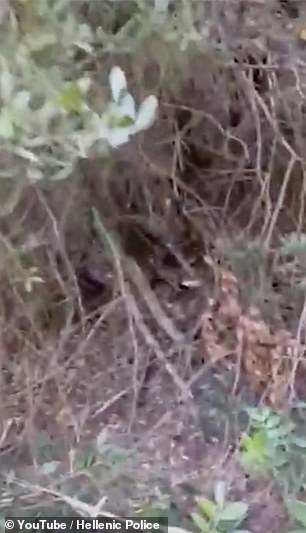 Pictured: Stills from a video showing the painting’s hiding place, where it was found by police wrapped up. The man moved the paintings from a warehouse in Keratea to the ravine where they were finally discovered