The centre was not holding. Writer Joan Didion had observed as much in the spring of 1967, when she documented the drug-fuelled nihilism on display in San Francisco: its swift, dishevelled descent from self-indulgence to self-destruction. But that was the beginning, not the end. 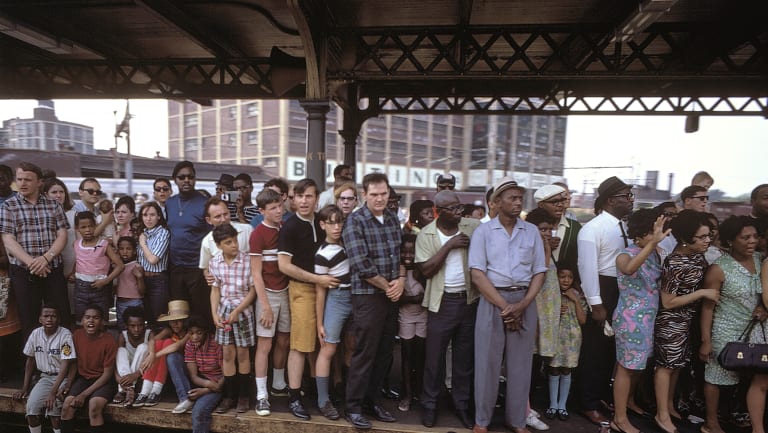 People jam a platform at a Philadelphia station as they wait for Bobby Kennedy’s coffin to pass by on a train.

Didion was wrong, so wrong, when she wrote in her collection of essays, Slouching Towards Bethlehem – which took its title from a line in W.B. Yeats' poem The Second Coming – that San Francisco's progressive Haight-Ashbury district was the very epicentre of an American malaise. She had gone there because that was "where the social haemorrhaging was showing up". Others knew that the US had been haemorrhaging for far longer elsewhere, the suffering surging from deep scars in places largely ignored or hidden from privileged eyes.

Senator Robert F. Kennedy was going to change all that. In January 1968, the young senator from New York also visited San Francisco. There, in a speech to an establishment crowd at the Commonwealth Club that was later published in The New York Times, he also invoked the Yeats poem: "Things fall apart; the centre cannot hold; Mere anarchy is loosed upon the world." But Kennedy's gaze ranged farther than Didion's. He insisted that the US would only recover and truly prosper when it addressed the inequalities facing all of its peoples.

"Children are starving in Mississippi, idling their lives away in the ghetto and committing suicide in the despair of Indian reservations," he said. With a presidential election due, the 42-year-old senator predicted 1968 would be a pivotal year. "It is a year for us to examine not only the candidates but also the country: to ask not only who will lead us but where we wish to be led; to look not only to immediate crises but also to the nature and direction of the civilisation we wish to build. For the many roots of despair all feed at a common source. We have fought great wars, made unprecedented sacrifices at home and abroad, made prodigious efforts to achieve personal and national wealth. Yet we ourselves are uncertain of what we have achieved and whether we like it."

It was a stirring, lyrical speech, one that reminded many listeners that the speaker carried vision and leadership in his bloodlines, and allowed them to hope that their country could be on the cusp of better things. But the centre would not hold. Two months after that speech, Kennedy would announce his candidacy for the 1968 presidential race. In five, he would be dead.

On June 5 last week, it was 50 years exactly since Bobby Kennedy was felled by an assassin's bullet in a crowded Los Angeles hotel kitchen, shot at close range as he left a celebration for his California primary win. The killer, 24-year-old Palestinian Sirhan Sirhan, didn't like his support for Israel. Kennedy's premature death was heartbreaking, not least because of the shattered lives left behind: a brood of 10 rambunctious children and their mother, devoted wife Ethel, pregnant with an 11th condemned never to know a father. It was haunting, too, coming almost five years after the assassination of his adored elder brother Jack (President John F. Kennedy), and stoking suspicions of a so-called Kennedy Curse, which had also claimed his siblings Joe jnr and Kathleen when both were still in their 20s. 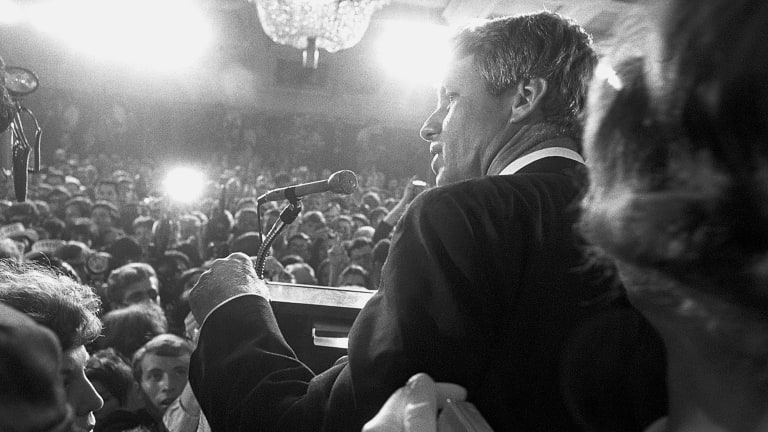 Bobby Kennedy at a California primary victory rally, minutes before his shooting.

Five decades on, why should we care? What relevance does this death have – did it ever have – for Australians? It's easy to be cynical, particularly when the passage of time has revealed the grubbier side of Camelot: the affairs and drinking, the entitlement bred of extreme wealth, and the win-at-all-costs mentality enforced by the patriarch who built it all. Cynicism is the cloak we don to protect us from the pain of hope dashed. It also weighs us down, preventing the hard slog and scramble required to get us to a higher ground, a better place.

Consider this, then, before surrendering to cynicism. About 150,000 people queued to file past Robert Kennedy's coffin before his funeral at St Patrick's Cathedral in New York. Thousands more waited on the sweltering streets. That was a mere sliver of the outpouring to come. After the requiem mass, the Kennedy entourage moved with the mahogany coffin to Pennsylvania Station; they were taking their boy to Washington DC, to rest alongside Jack and the rest of the country's fallen heroes in Arlington National Cemetery.

The 362-kilometre trip would usually have taken about four hours. Instead, it took more than eight, as successive waves of mourners gathered along the tracks, all the way out of New York City's urban clutter, through the rolling fields and wooded tracts and hardknock towns of New Jersey, Philadelphia and Maryland, before finally pulling into Washington's Union Station.

Estimates put the crowd that long day at more than one million. Imagine that. In the stifling heat of high summer, at a time before social media and the possibility of Facebook memorial pages or #funeraltrain threads, one million people or more simply stopped what they were doing to witness the passing of a train. 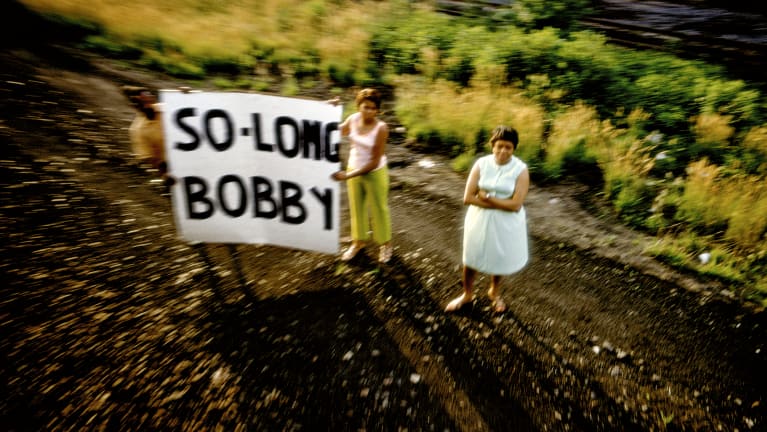 Imagine that and ask yourself: who, among today's world leaders, in Australia, the US or anywhere else, could garner such a spontaneous display of posthumous respect? Barack Obama's inauguration is said to have pulled a record turnout of 1.8 million to the National Mall in 2009. But Bobby Kennedy was not a president, and there was no formal gathering point for his supporters; nothing but kilometres of backblocks and badlands.

You can still see some of their faces, frozen in history. Assigned to cover the Arlington ceremony for a magazine, photographer Paul Fusco was on the funeral train. He was so astounded by the montage of grief rolling past his window that he took out his camera and began shooting even as the train heaved out of New York. Many of his pictures can be found online.

So many faces, so many stories. Here is a pair of rockabilly lovers, perched on a motorbike above the tracks. There, three nuns holding rosary beads tend a flock of primly uniformed convent girls. Did the sisters know that a hotel busboy had placed a rosary in Kennedy's hand as he assured the senator everything would be okay? And that he had clutched those beads in a final act of faith as a halo of red fanned out around his head? In another photo, a lone woman stands by a fence, nursing a baby in her arms. Behind her there is a field of long grass; no house is in view. Had she been cooking at home when she heard the whistle in the distance? Had she put down a basket of washing – there is always more washing with a baby in the house – and stripped off her apron, saying to nobody in particular: "It's time. I'm going"?

Black Americans are everywhere in these photographs, too, in neat baseball uniforms and bright summer dresses, and stripped to the waist atop carriages on railway sidings. Their presence is a statement, a steadfast refusal to be relegated to the back row for this moment in history. Bobby was their candidate. Two months earlier, he had been due to speak at a campaign event in an Indianapolis ghetto when news broke that Martin Luther King jnr had been shot and killed. The police advised the senator they could not protect him if riots erupted, but he climbed on the back of a flatbed truck anyway, and broke the news that their leader had died.

In an improvised speech, Kennedy told the crowd he understood their anger, for a white man had shot his own brother. Then he cited Aeschylus, the Greek father of tragedy: "Even in our sleep, pain which cannot forget falls drop by drop upon the heart until, in our own despair, against our will, comes wisdom through the awful grace of God."

Elsewhere around the country, the cities erupted. But there were no riots in Indianapolis that night. He had not always been the champion of the underdog, this privileged prince of Hyannis Port in the northeastern state of Massachusetts, but by 1968 it seemed Kennedy had found his heart. Black Americans, Latinos and the white working poor – they were his people. They had witnessed him break bread with labour union heroes like César Chávez, had welcomed him to the Mississippi Delta and the Appalachians, where he dared to ask whether America's much vaunted war on poverty was ever going to be won. 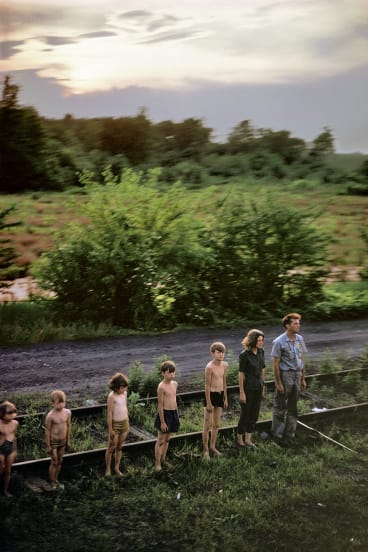 Seven people wait alongside the track.

And so we come to my favourite Fusco photo. Seven people – probably a family. Dad is in a grubby uniform, perhaps from a service station, and Mum's hair hangs defeated over a gaunt face. The children, each as angular as chicken wings, are shirtless, legs smeared with dirt. Nonetheless they are lined up along the railway track, in careful order of height, shoulders back. There is dignity here, an inner glow that may have been lit when Senator Robert Kennedy, rich and powerful, paid attention to folks like them. Gaze long enough at their picture and you can hear that careworn mother, fussing as she assembles them. Stand up now. He is gone. Attention must be paid.

It is not so easy after looking at these photos to don the cloak of cynicism. For the problems of these people, and the millions more who came afterwards, have not gone away. Aren't they – aren't we? – still searching for genuine visionaries and real leadership? "We search for answers to specific problems; but more than this, we seek to recapture our country," Robert Kennedy told that Commonwealth Club crowd 50 years ago. "We have not yet discovered how to do it. That, perhaps, is what troubles these long nights of our national spirit."