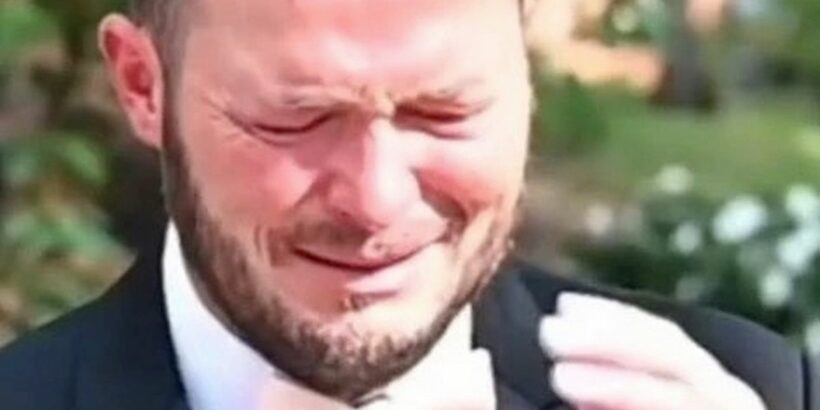 A groom thought he was going to die on his special day after a guest slipped him a cocktail of drugs without him knowing.

His blushing bride, Brandy shared footage of Billy breaking down during the wedding ceremony on TikTok as the substances had him suffering from some alarming symptoms that had them worried he was going to have a heart attack.

In the distressing clip, which has racked up 7.7million views, shows the Kentucky bloke in an overly emotional state as he slurs words and even forgets his vows.

READ MORE: Woman branded 'a**hole' for inviting male pal to wedding when he has girlfriend

His new wife, who shared the clip to raise awareness of spiking, wrote online: "His heart was racing, his brain was moving faster than he could form words. He tried saying his vows to me but was unable to think. His emotions [were] heightened."

Brandy even claims they feared he would suffer from a heart attack at one point.

It was later confirmed that her husband had been spiked by an unnamed wedding guest after he was evaluated by a nurse who gave him a drug test.

The management team at their wedding venue, the Parkside Resort in Pigeon Hole, Tennessee, launched their own investigation and 'dealt with' the culprit.

Brandy is now trying to ‘bring awareness to the potentially fatal consequences’ of spiking someone’s drink.

She wrote: "Many people intentionally combined alcohol and Adderall in order to party harder and longer.

"So they spike others’ drinks thinking they will be hype all night with them."

She then signed off with a message to the person who spiked her husband’s drink: "F*** you for causing such trauma to my family."

Adderall is a type of stimulant ADHD medication which can be dangerous when mixed with alcohol, despite the common misconception that mixing depressants and stimulants cancel each other out, Web MD explains.