Juan Guaido called for a series of escalating workers’ strikes to begin on Thursday which he said would culminate in a general strike that would force President Nicolas Maduro from power.

The opposition leader urged government workers to join political protesters on the streets, while insisting in an interview with Fox Business that Venezuela is ‘very close to achieving freedom… as long as we remain united.’

But there are signs that Guaido’s bid for power is grinding to a halt after a ‘military uprising’ that he declared on Tuesday largely failed to materialise, with most senior defence chiefs remaining loyal to Maduro.

The call to arms did provoke protests across the country but these quickly descended into scatter-gun violence, with at least two dead and more than 100 wounded so far.

Meanwhile relations between America, which backs Guaido, and Russia, which supports Maduro, soured as each accused the other of interfering in another country’s affairs. 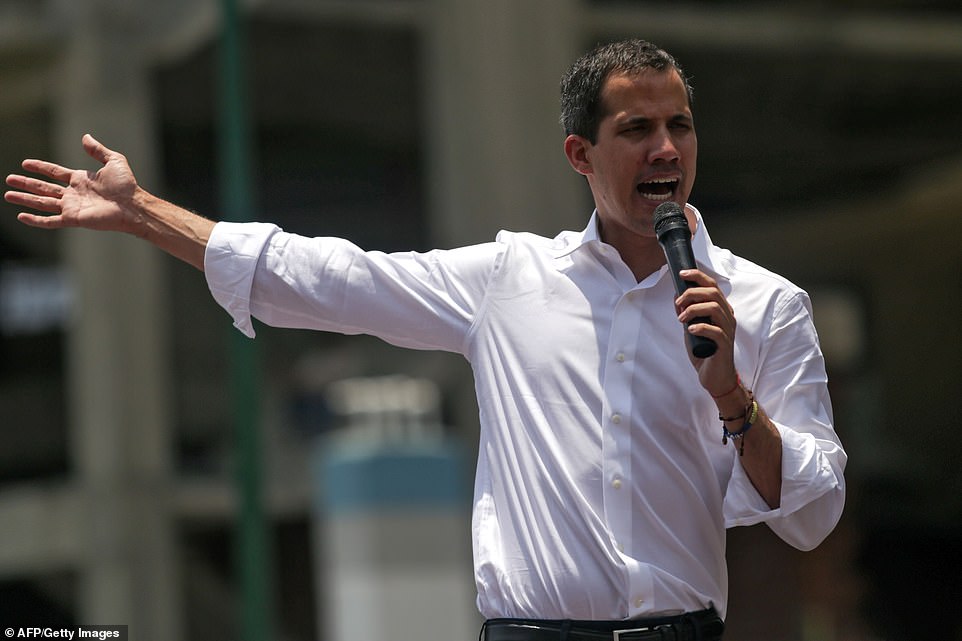 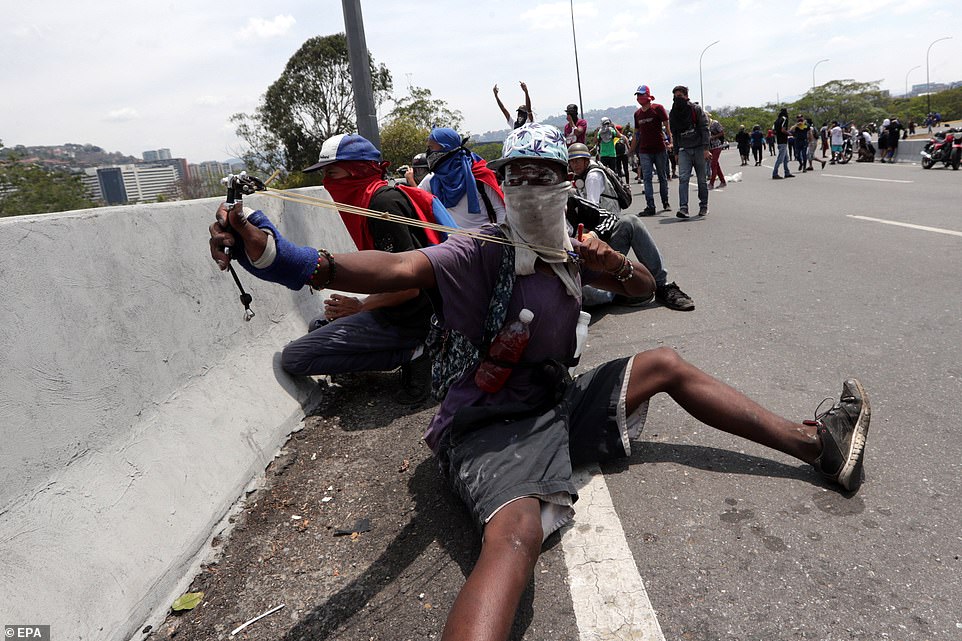 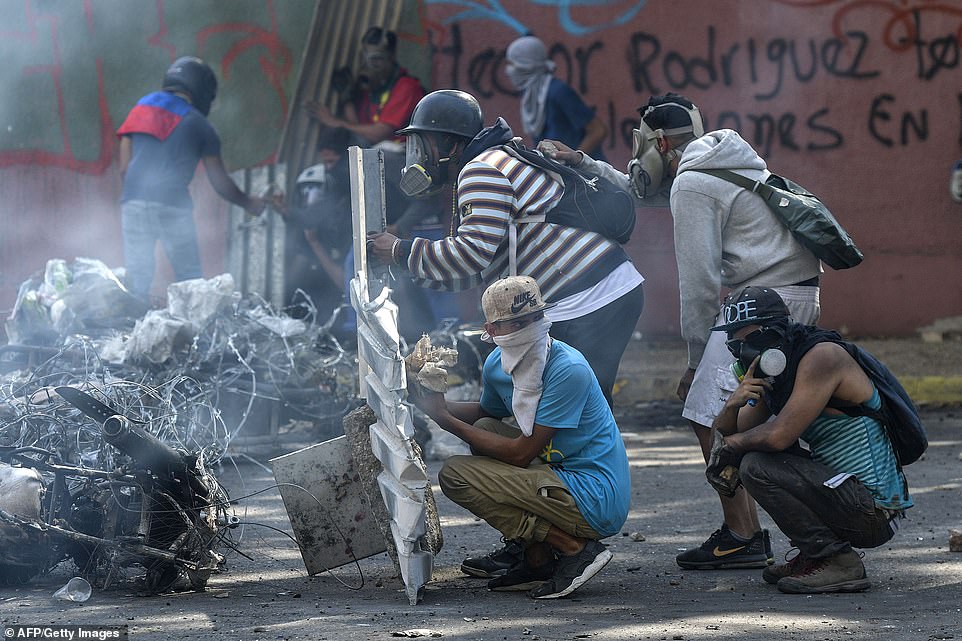 Two days of protests in the capital Caracas (pictured) have failed to oust Maduro, largely because most senior military figures have remained loyal to his regime 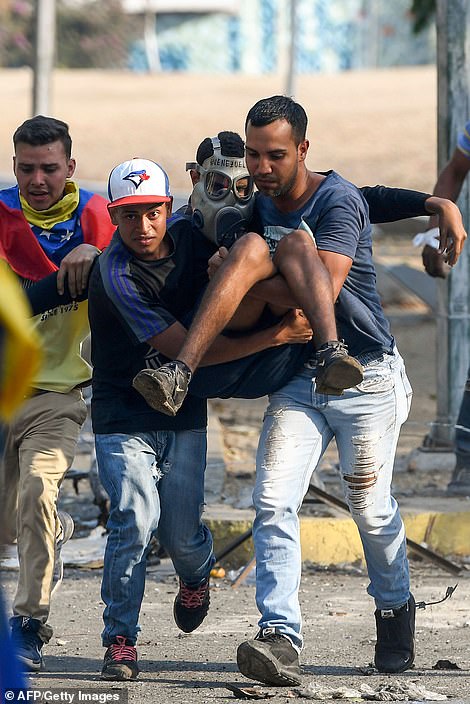 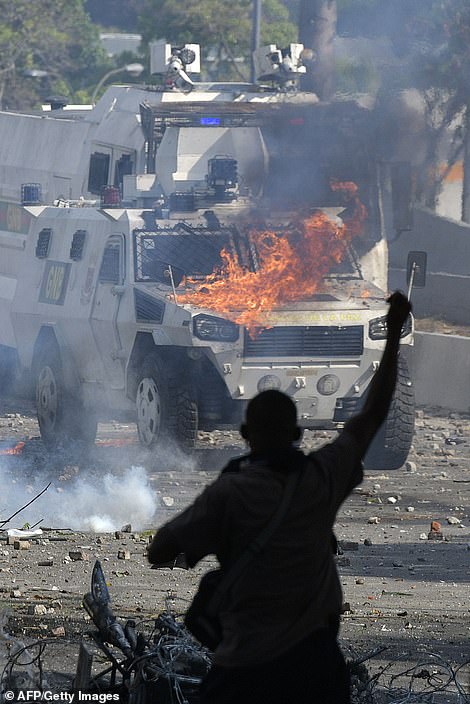 Guaido, who is recognised by the US and its allies as Venezuela’s interim leader following elections that many considered rigged, has pledged to restore democracy to the country 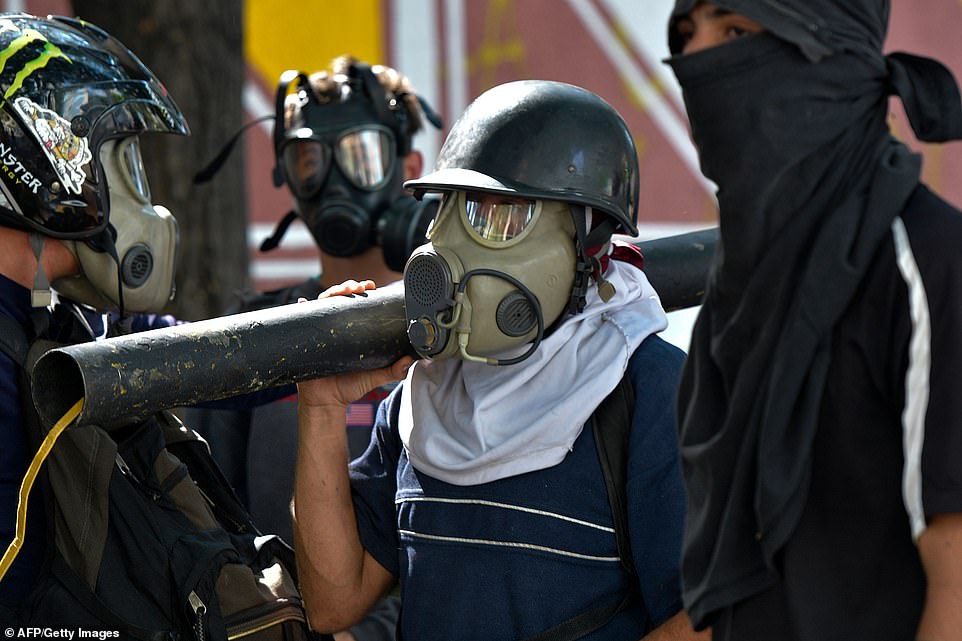 Anti-government protesters prepare to clash with security forces during May Day demonstrations in the capital, Caracas 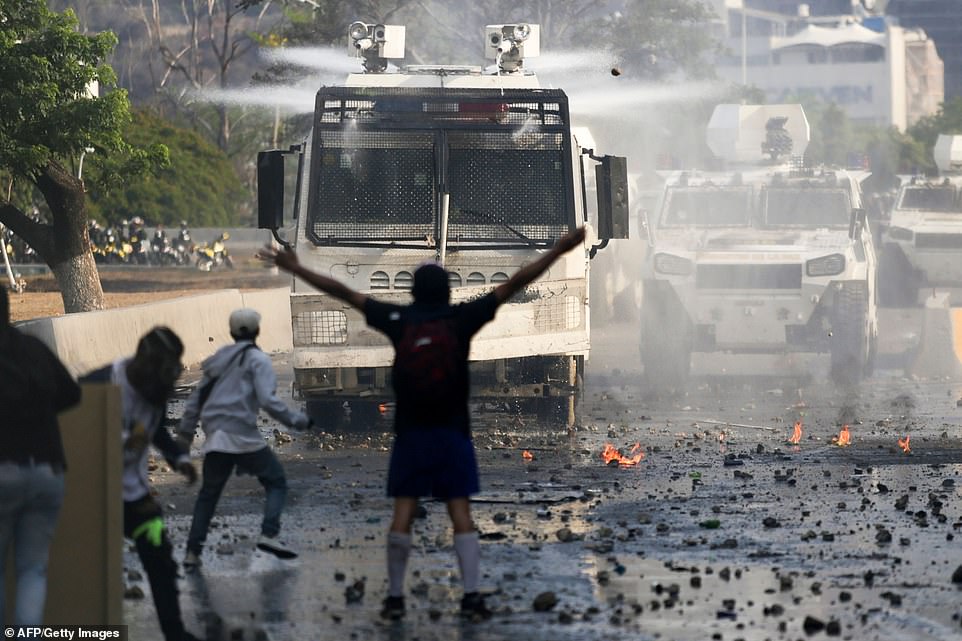 Guaido had promised the largest marches in Venezuela’s history on Wednesday, but by the end of the day admitted that not enough people had turned out

Guaido had called for the ‘largest march’ in Venezuela’s history on Wednesday and said on Twitter that ‘millions of Venezuelans’ were in the streets in ‘this final phase’ of his move to oust Maduro.

But by late afternoon, many of the protesters in the capital Caracas had drifted home. National Guards fired tear gas at a hardcore of demonstrators who remained.

One woman, identified as 27-year-old Jurubith Rausseo García, was killed after being shot in the head, according to local media.

Another demonstrator was filmed being carried by others to a first aid truck after being injured in the hand, Reuters video showed.

Guaido admitted to CNN at the end of the day that ‘there were not enough (people)’ on the streets, and urged more members of the military to join him.

The armed forces leadership has so far remained loyal to Maduro, who has been in power since his mentor, the late President Hugo Chavez, died in 2013. 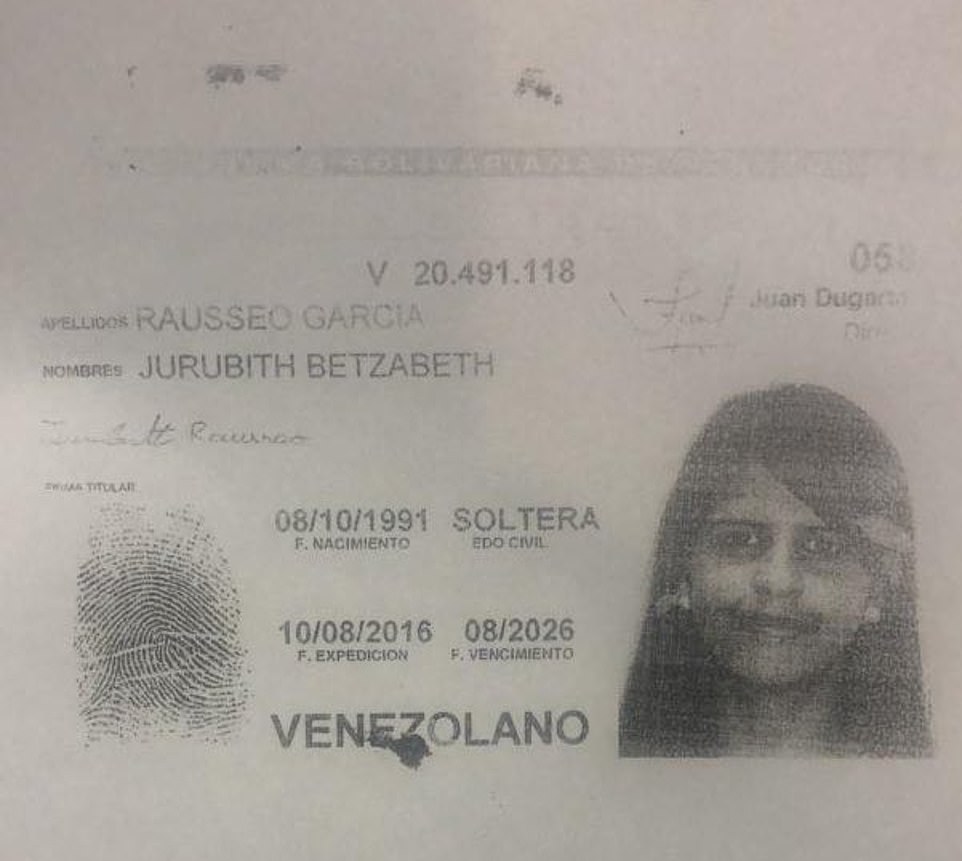 At least two people have died during the protests so far, including 27-year-old Jurubith Rausseo Garcia, who was shot in the head on Wednesday in Caracas, local media reports 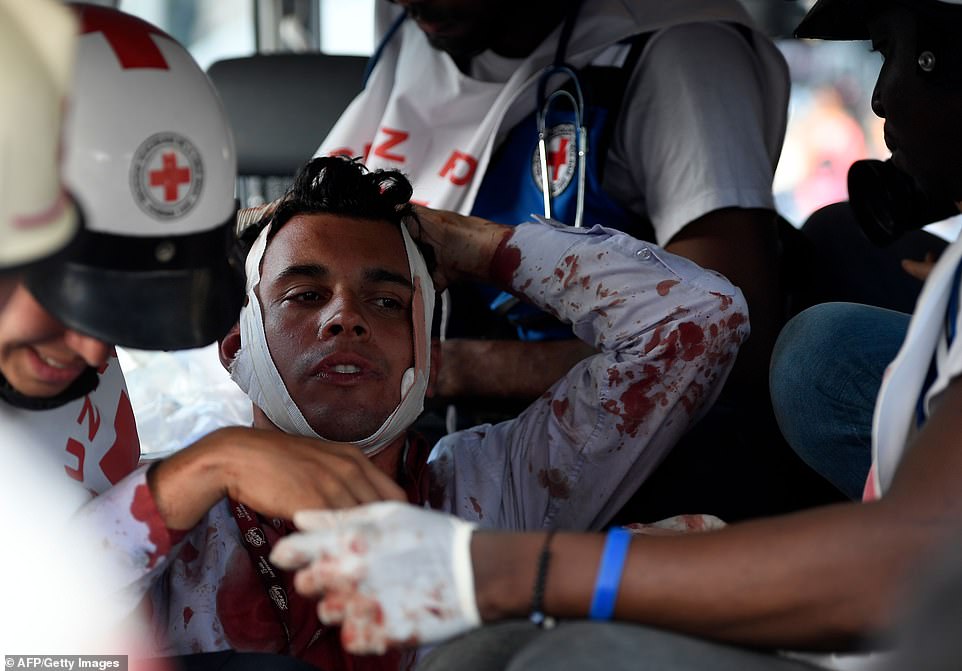 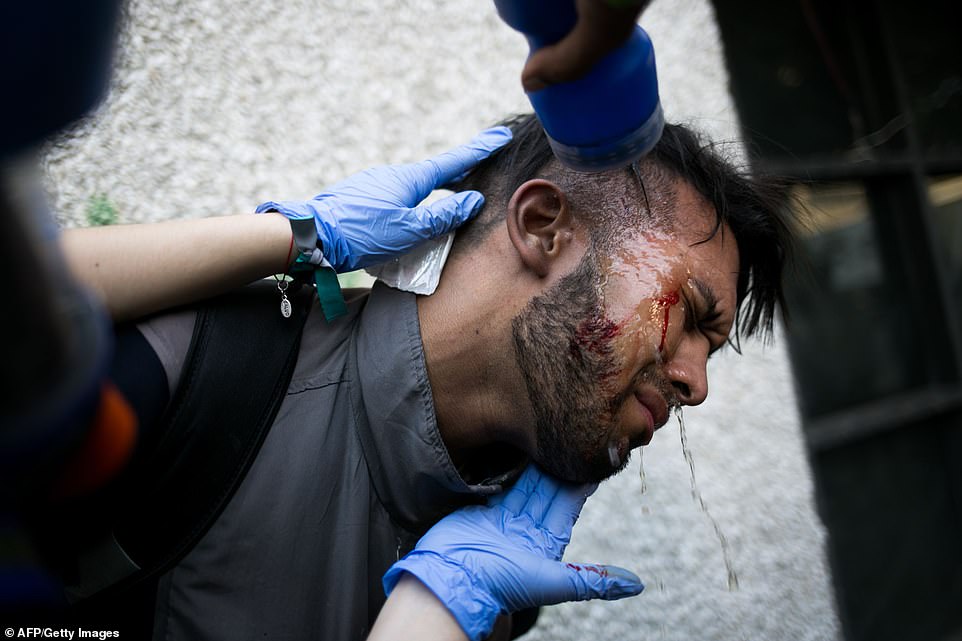 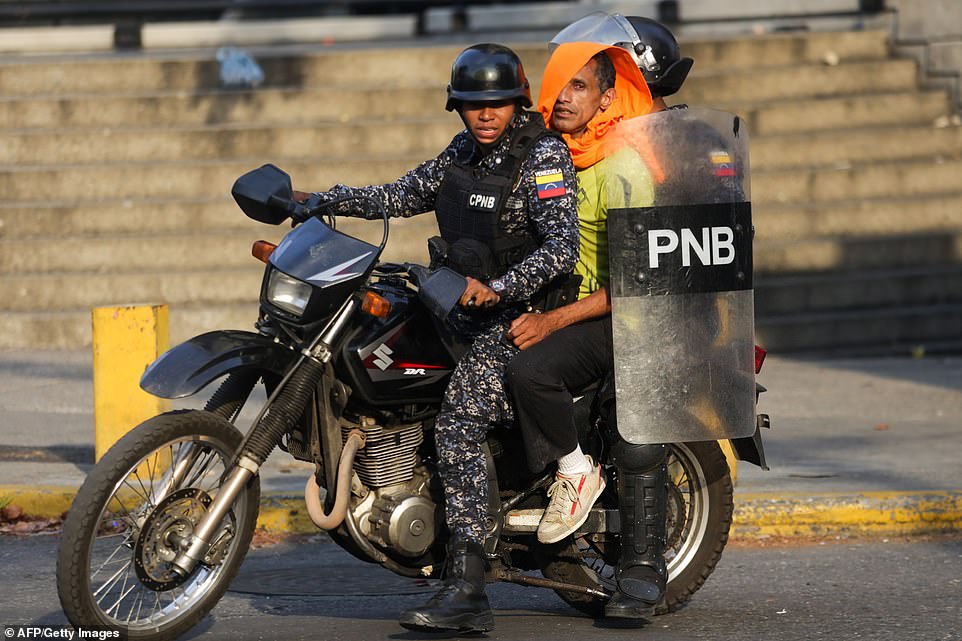 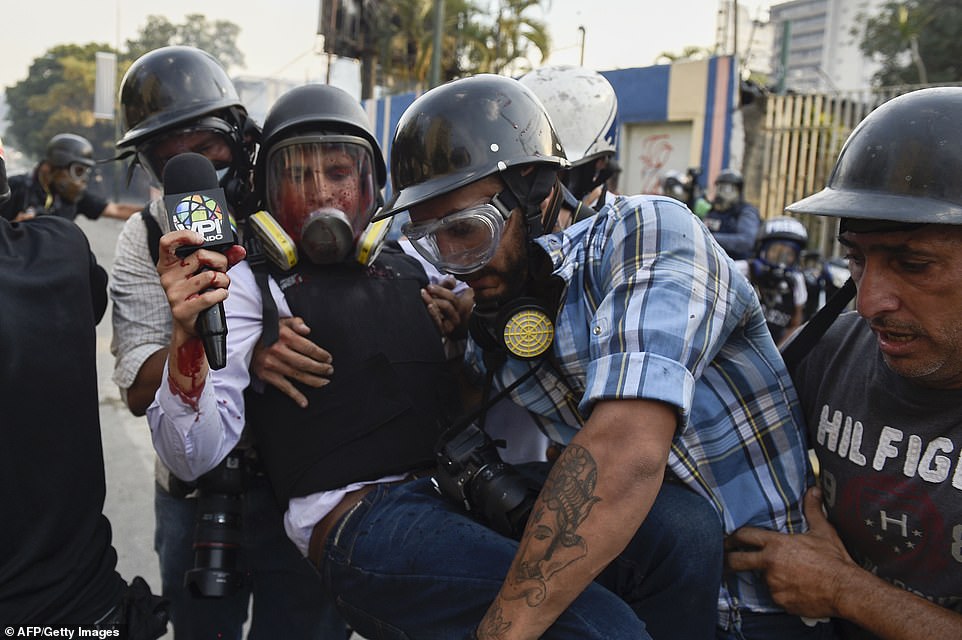 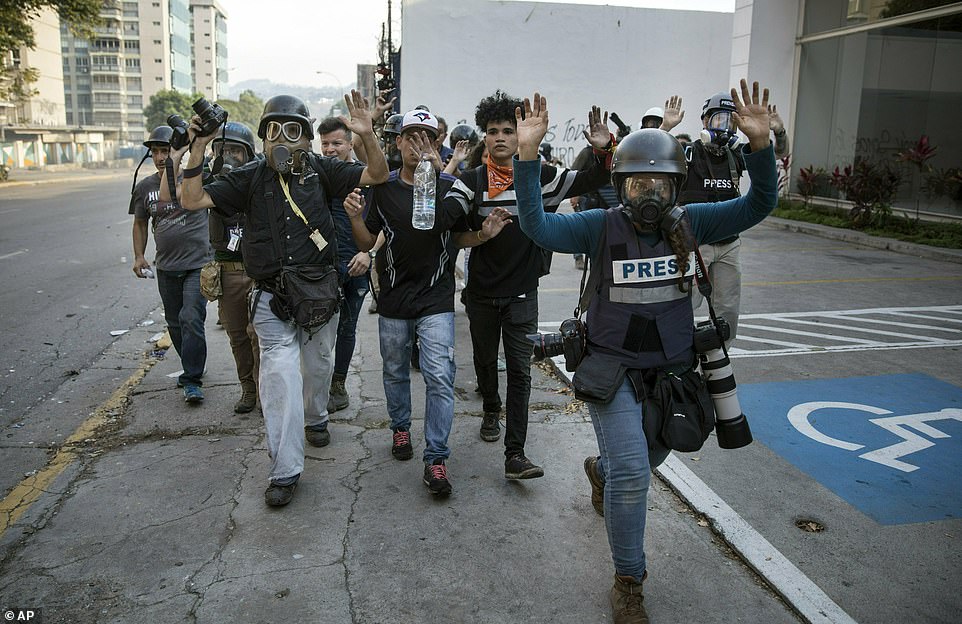 A group of journalists raise their hands over their heads so as not to be confused for protesters, as they walk in front of the National Police, near the La Carlota airbase

It was unclear what more Guaido can do. The Venezuelan opposition has often staged huge street protests against Maduro but failed to dislodge him despite a deep economic recession and hyperinflation.

Demonstrators said they were prepared for the process of ousting Maduro to last a long time.

‘In three months Guaido’s been able to do what they have not done in 20 years, and one has to be patient.’

Others are frustrated that nothing has changed more than three months after Guaido, head of the opposition-run National Assembly, invoked the constitution to assume an interim presidency, arguing that Maduro’s 2018 re-election was illegitimate.

Guaido is recognized as Venezuela’s legitimate head of state by the United States, the European Union and others, while Maduro is backed by countries including Russia, China, and Cuba.

Those fault lines are increasingly putting Venezuela at the heart of global geopolitical tensions.

U.S. President Donald Trump’s administration has imposed sanctions on the Maduro government and refused to rule out military intervention, although it says it prefers a peaceful transition.

The Pentagon appeared to downplay any active preparations to directly intervene in Venezuela, but acknowledged detailed contingency planning. 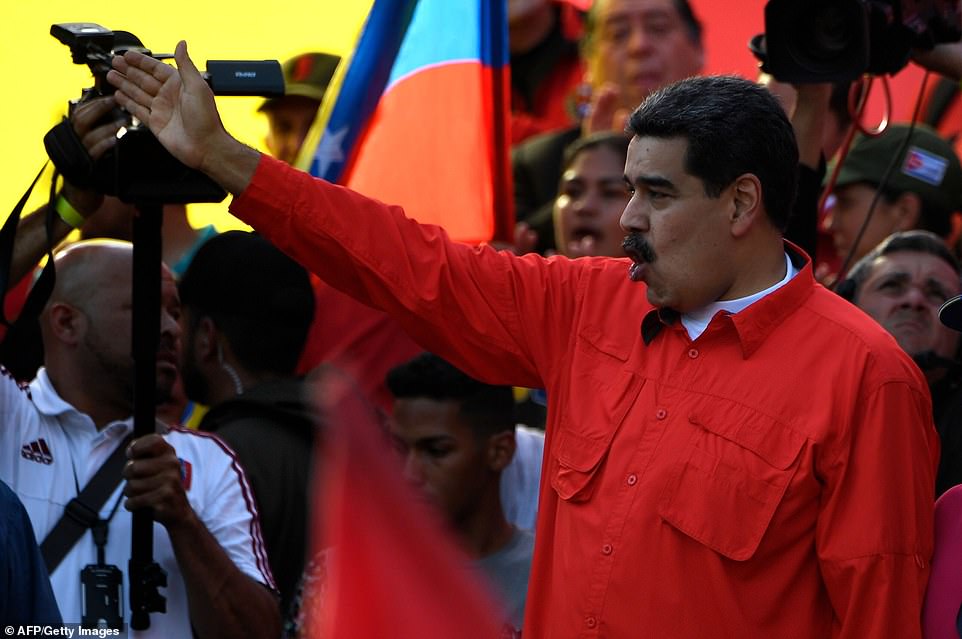 Maduro has been in power since 2013 when his predecessor and mentor, socialist leader Hugo Chavez, died and won a second term in office last year in elections that many consider illegitimate 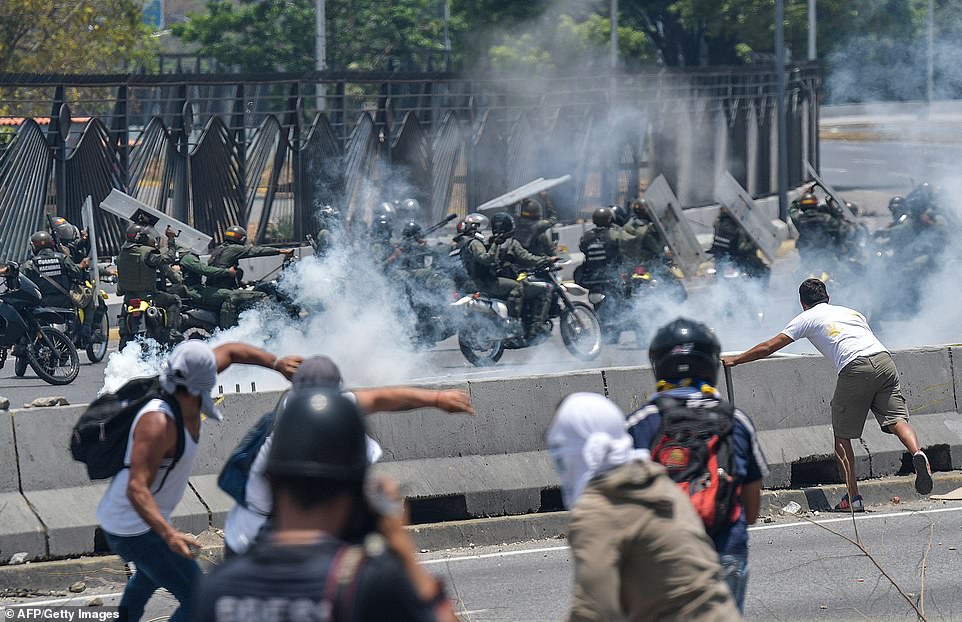 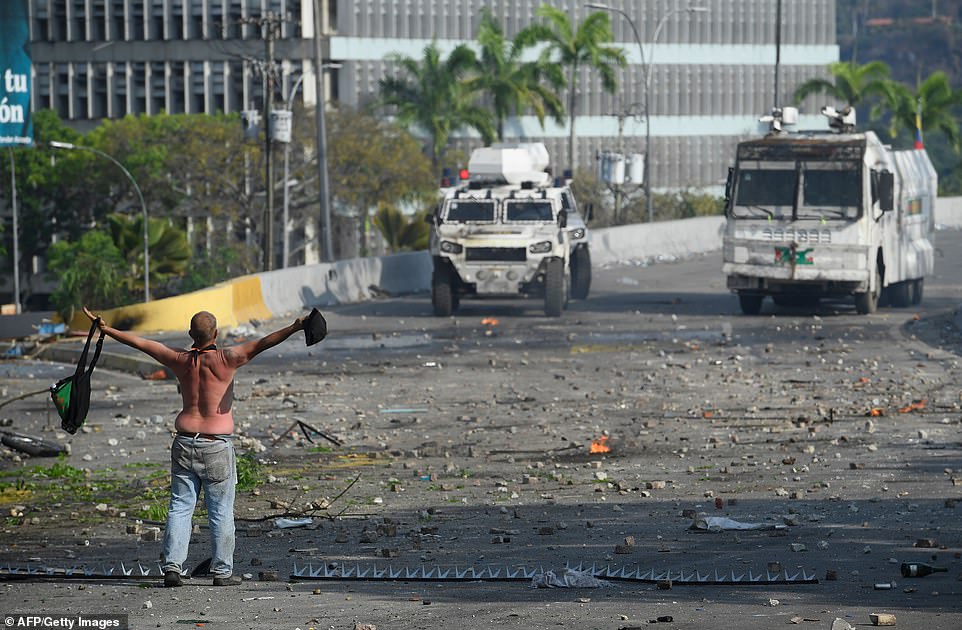 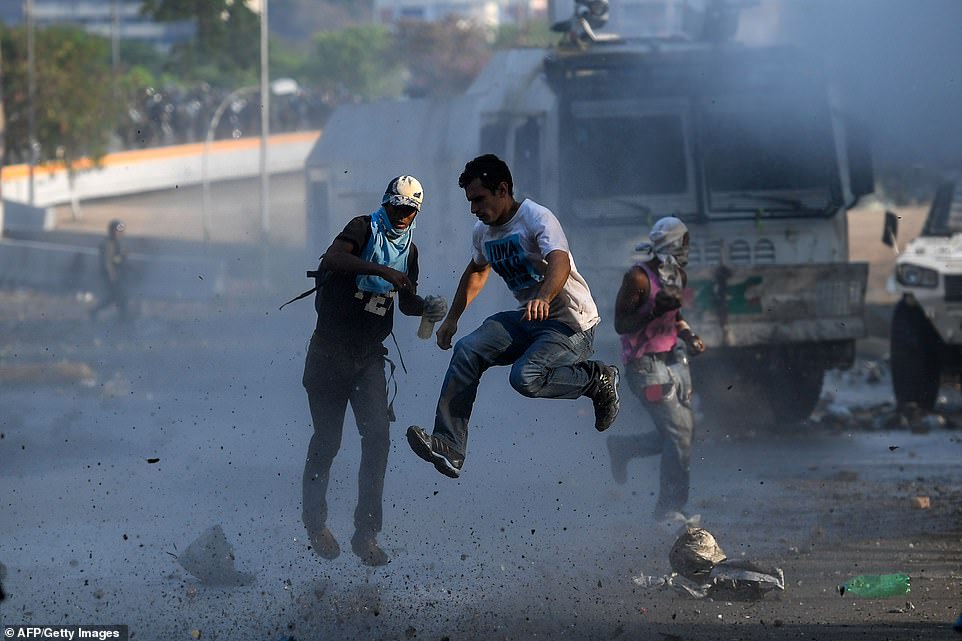 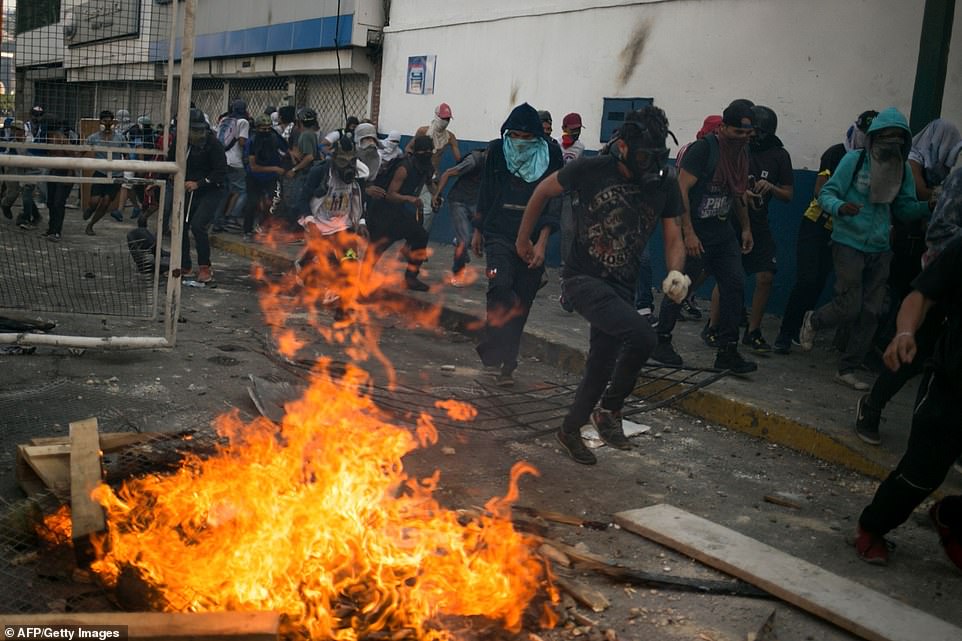 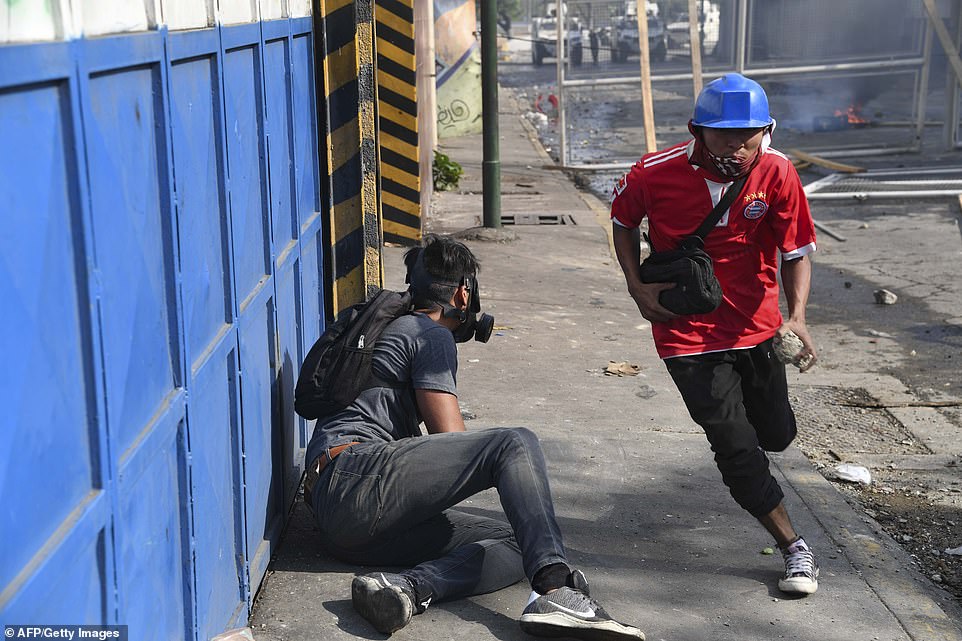 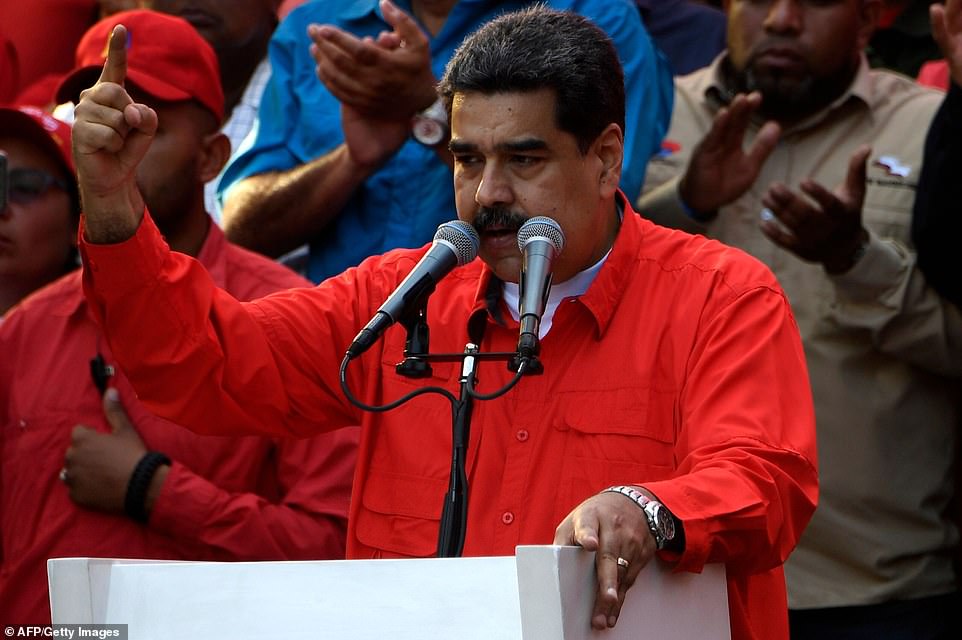 Maduro remains in power largely thanks to the loyalty of the military, and while some soliders and senior ministers have defected, the others have remained loyal

In turn, the United States has accused Moscow of interfering in the South American country, an ally of Russia since the time of Chavez.

Pompeo said Maduro had been expected to flee the country on Tuesday but Russia convinced him to stay, which the Kremlin has denied.

‘This is our hemisphere,’ he told reporters outside the White House. ‘It’s not where the Russians ought to be interfering. This is a mistake on their part. It’s not going to lead to an improvement of relations.’

Maduro retains control of state institutions and the loyalty of the armed forces, frustrating Guaido’s bid to assume the day-to-day functions of government, which he says would be a prelude to calling new elections.

Seeking to appeal to Maduro’s traditional base among the working class, Guaido said on Wednesday he would consider a proposal from public workers to call for a series of stoppages leading up to a general strike.

Carlos Alberto, a 70-year-old small-business owner, draped in a Venezuelan flag at the Caracas protest, said: ‘We are tired of this regime, that has brutally impoverished us. My children and almost all my family have already left Venezuela. … We know that if it’s not today, it will be tomorrow, because this has to end.’

Venezuelan living standards have declined even further in the first several months of the year, with blackouts and water shortages adding to hyperinflation and chronic shortages of food and medicine that have prompted millions to emigrate.

Triple the usual daily number of Venezuelans fled across the border to Brazil on Tuesday, Brazilian government data showed.

Maduro, who says Guaido is a puppet of the United States seeking to orchestrate a coup, also called a march on Wednesday.

In a speech to supporters gathered near the Miraflores presidential palace, Maduro said he recognized the need for ‘big changes within the Bolivarian revolution.’ He did not give details.

Traveling to the pro-Maduro rally, educator Mercedes Martinez called Guaido a ‘lapdog’ and said: ‘The empire wants to smother us, cut off our head and colonize us. … The people of Venezuela are defending Venezuela.’