The volcano spewed streams of red hot lava into nearby villages and black smoke into the sky, prompting the evacuation of thousands of people. 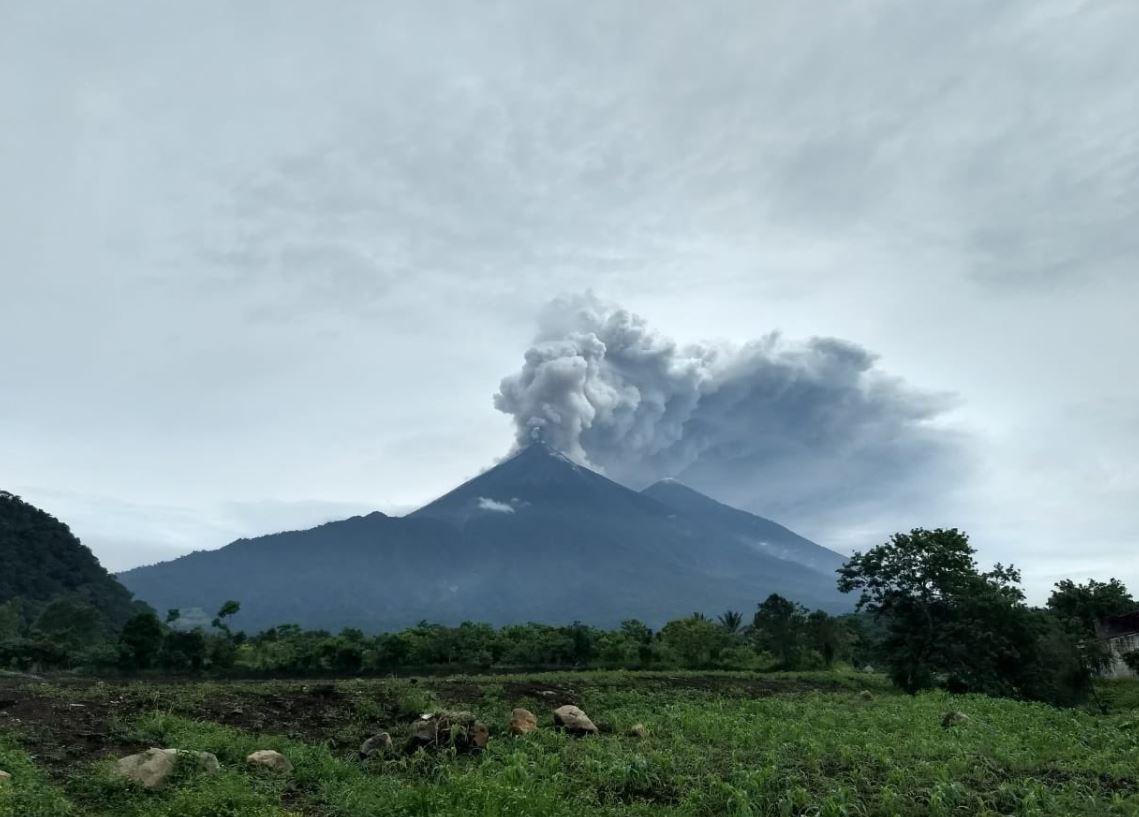 Dramatic photographs captured the huge eruption, which is about 25 miles south-west of the capital Guatemala, and it has caused widespread panic across the Central American country.

La Aurora international airport in the capital of Guatemala City was forced to close its only runway due to the presence of volcanic ash.

Countless people have been injured in the eruption, the second major one from the peak this year.

Farmers and villagers were covered in molten ash as they fled their homes trying to get to emergency shelters. 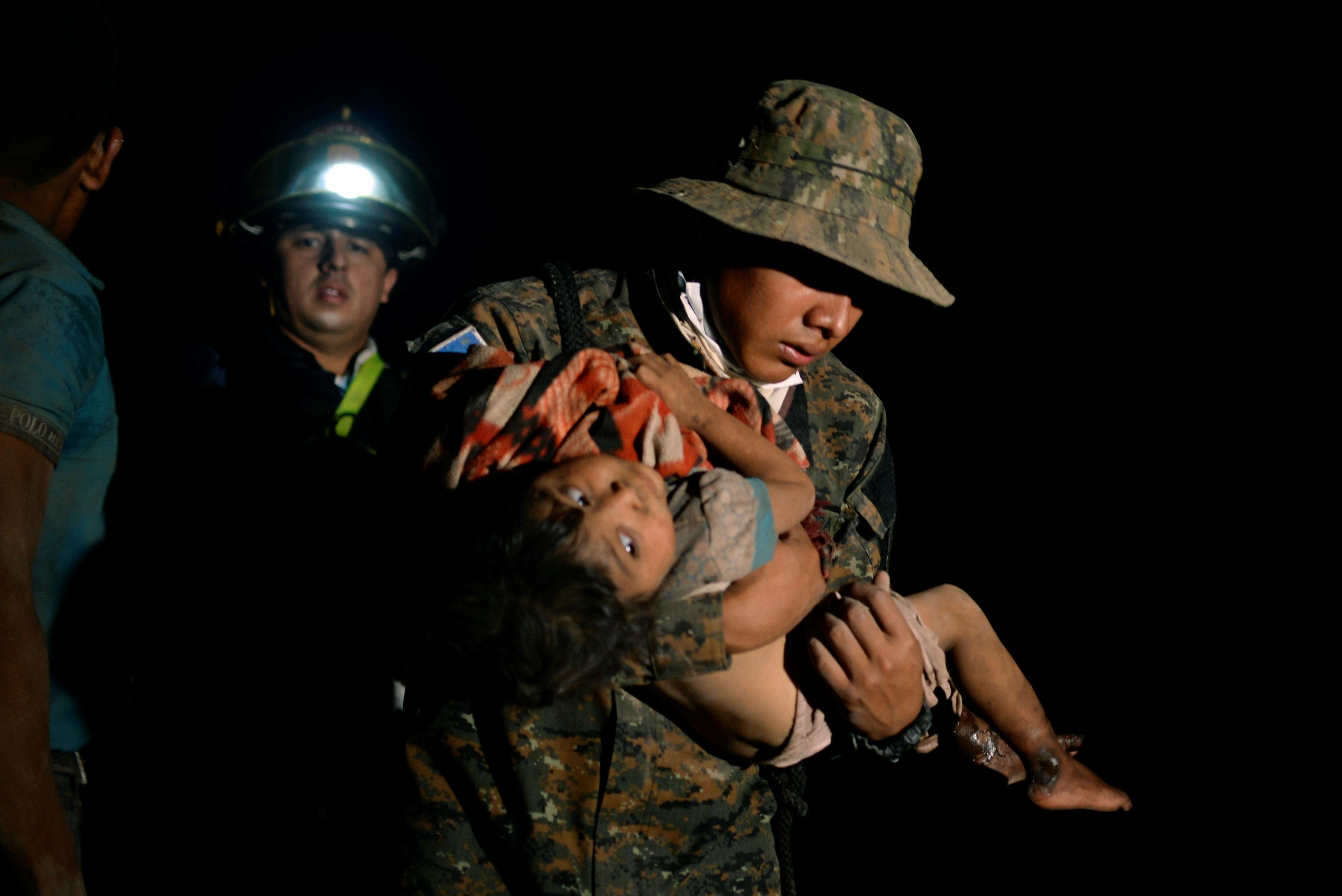 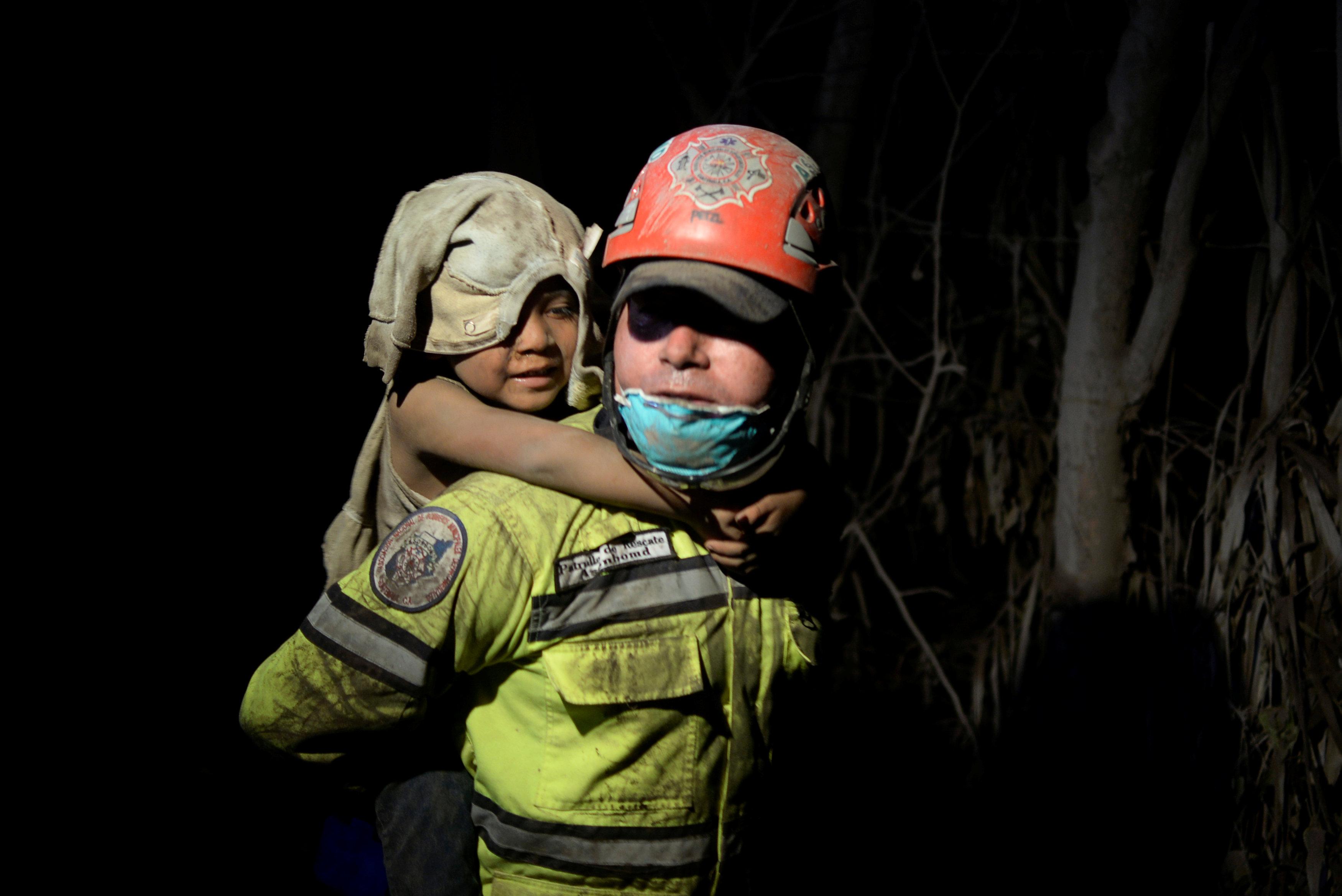 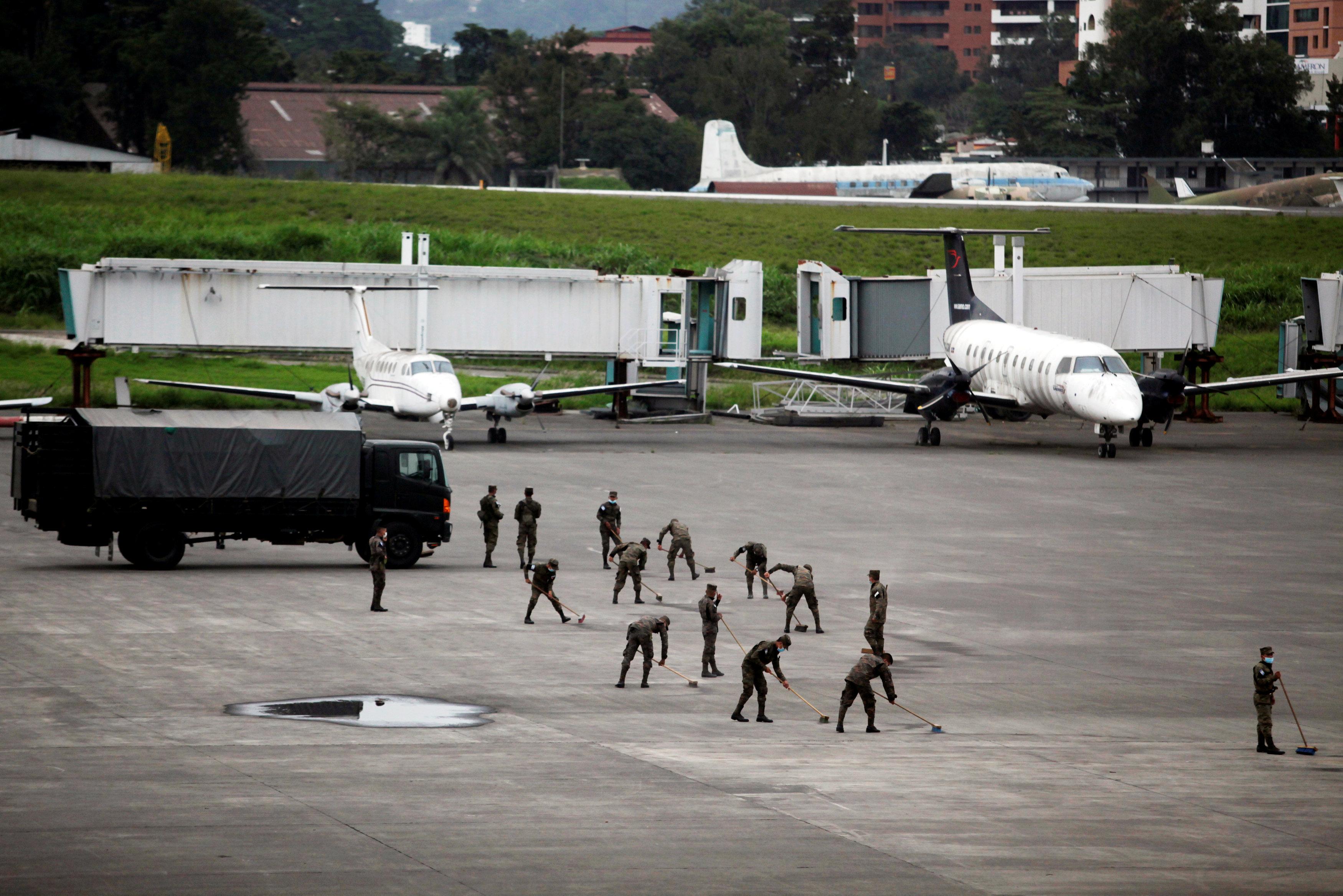 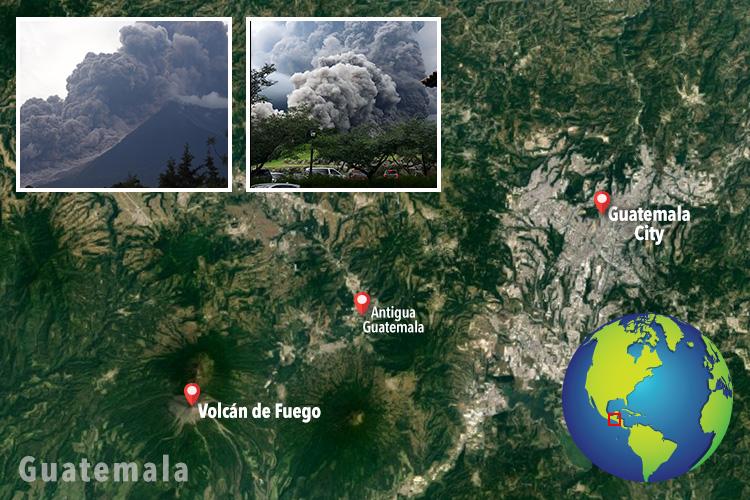 One woman was filmed covered in soot as she told reporters: "Not everyone escaped. I think they were buried."

People in the villahe of El Rodeo were killed when a flow of lava hit their homes.

In a statement he told of the nation's "deep pain" because of the "irreparable losses" in human lives. 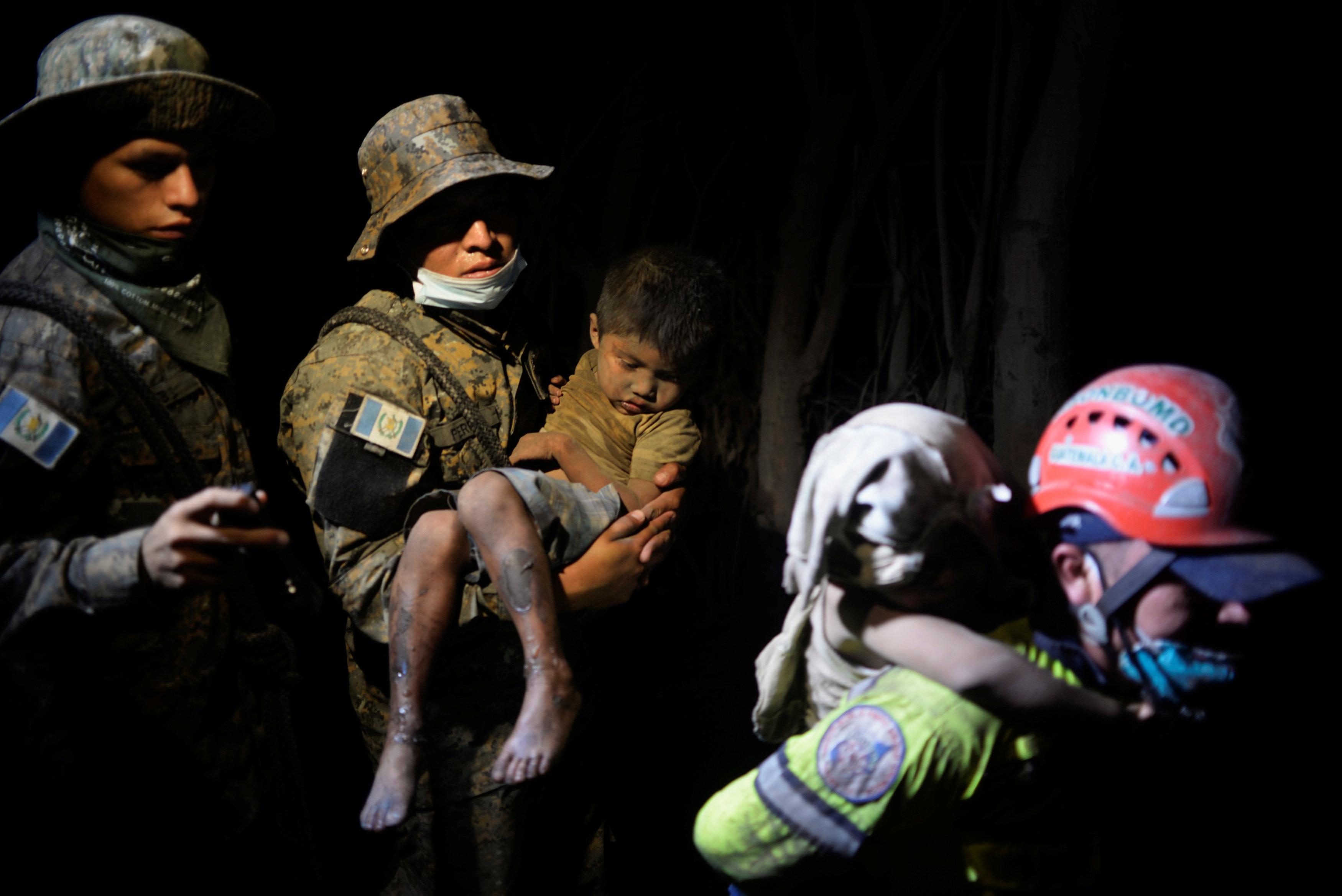 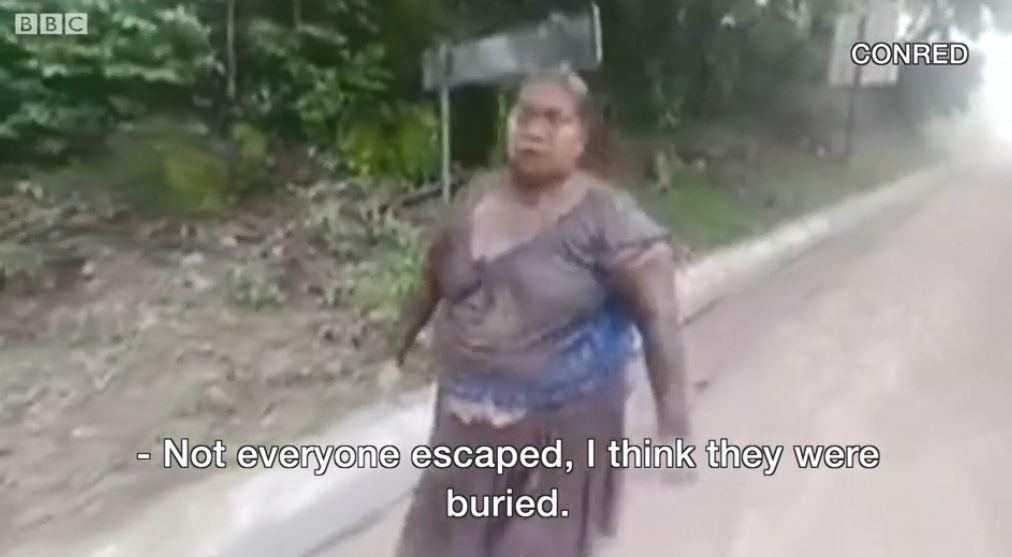 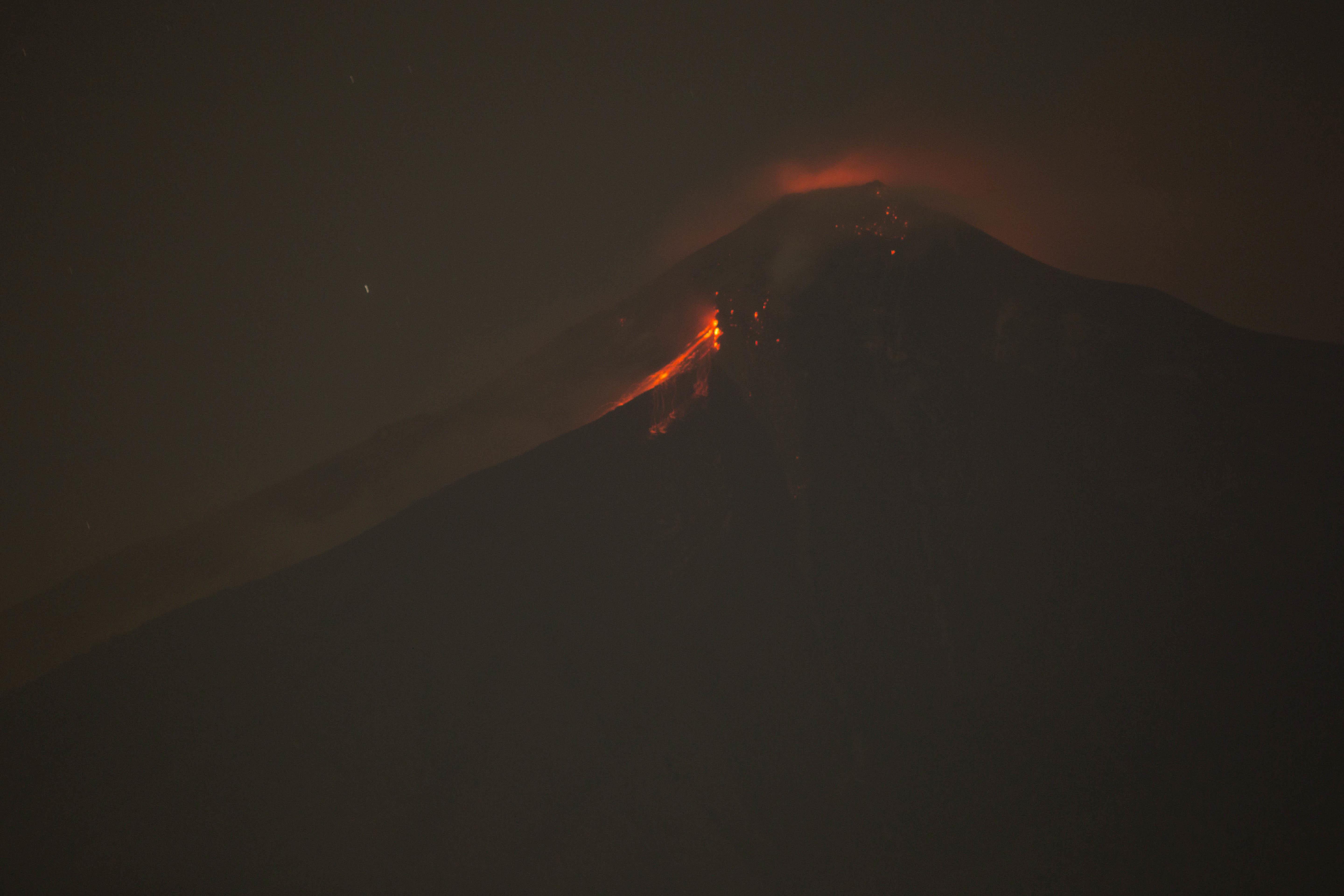 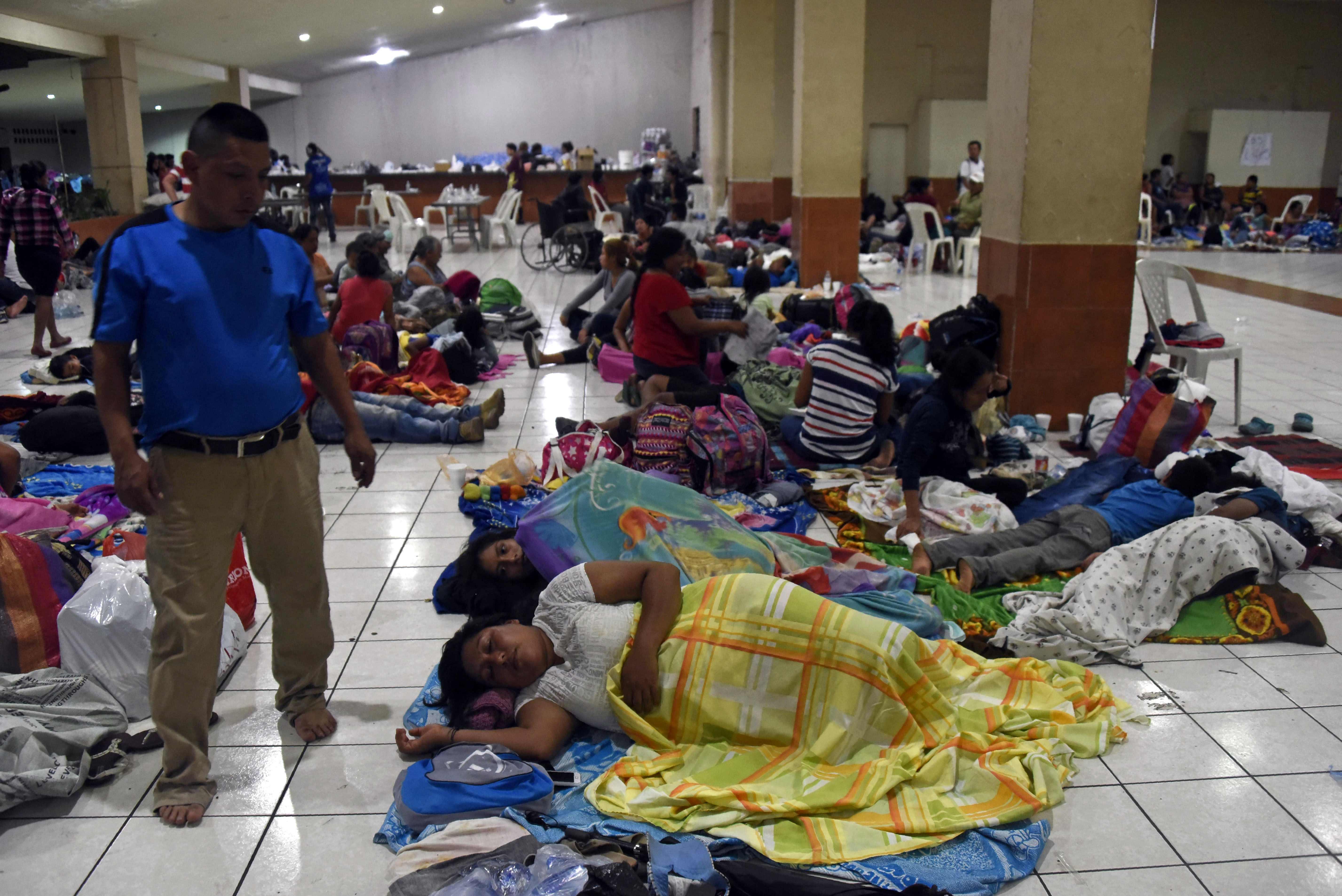 He added: "Unfortunately El Rodeo was buried and we haven't been able to reach the La Libertad village because of the lava and maybe there are people that died there too."

This is the biggest eruption Guatemala has seen since 1974.

Rescuers are among those who have died in the volcano blast, and several children are believed to have been killed.

Lava also flowed through corn fields where people were working, killing some on the spot.

Guatemala's disaster agency said 3,100 people had evacuated nearby communities, and the eruption was affecting an area with a population of about 1.7 million people. 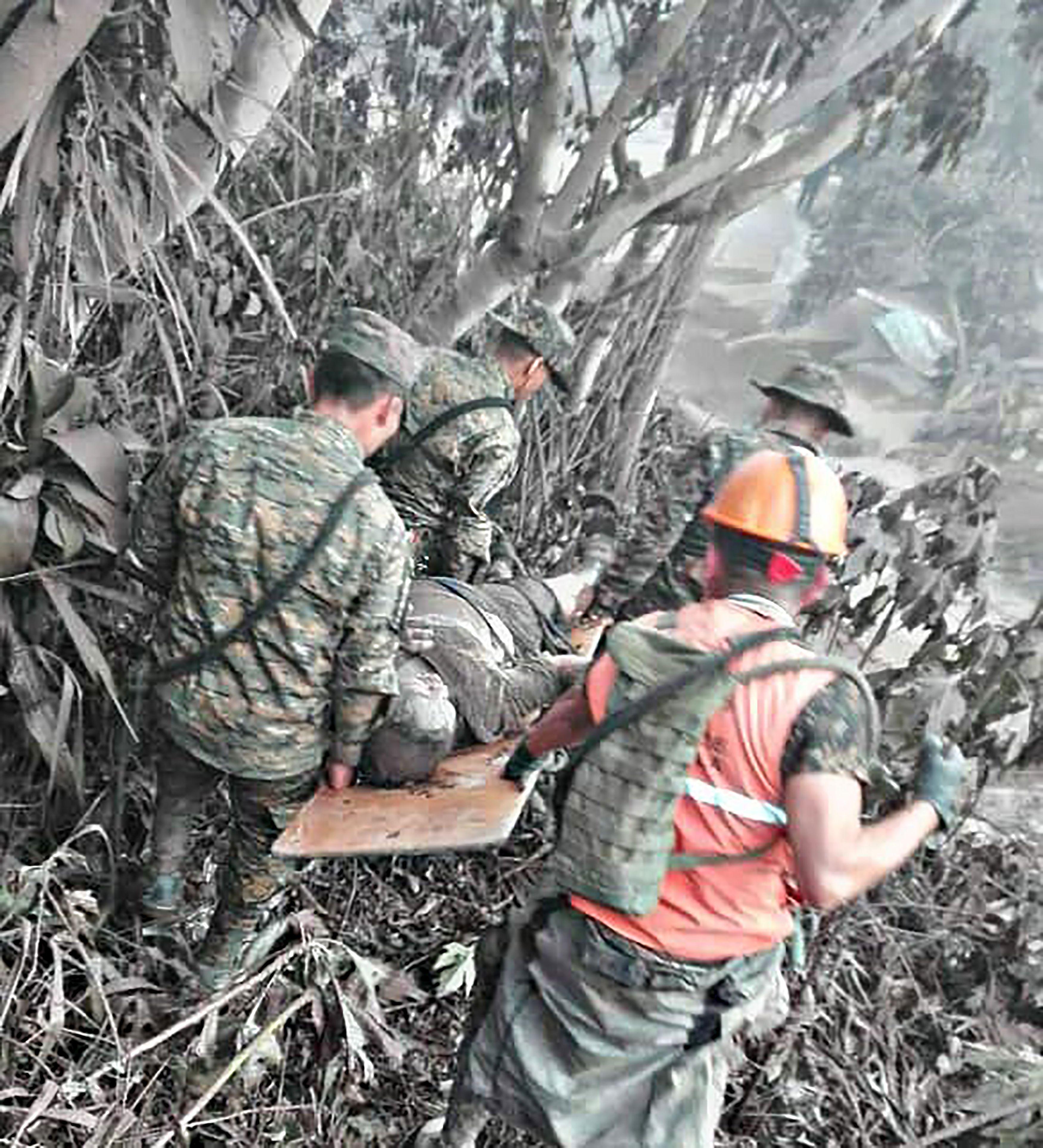 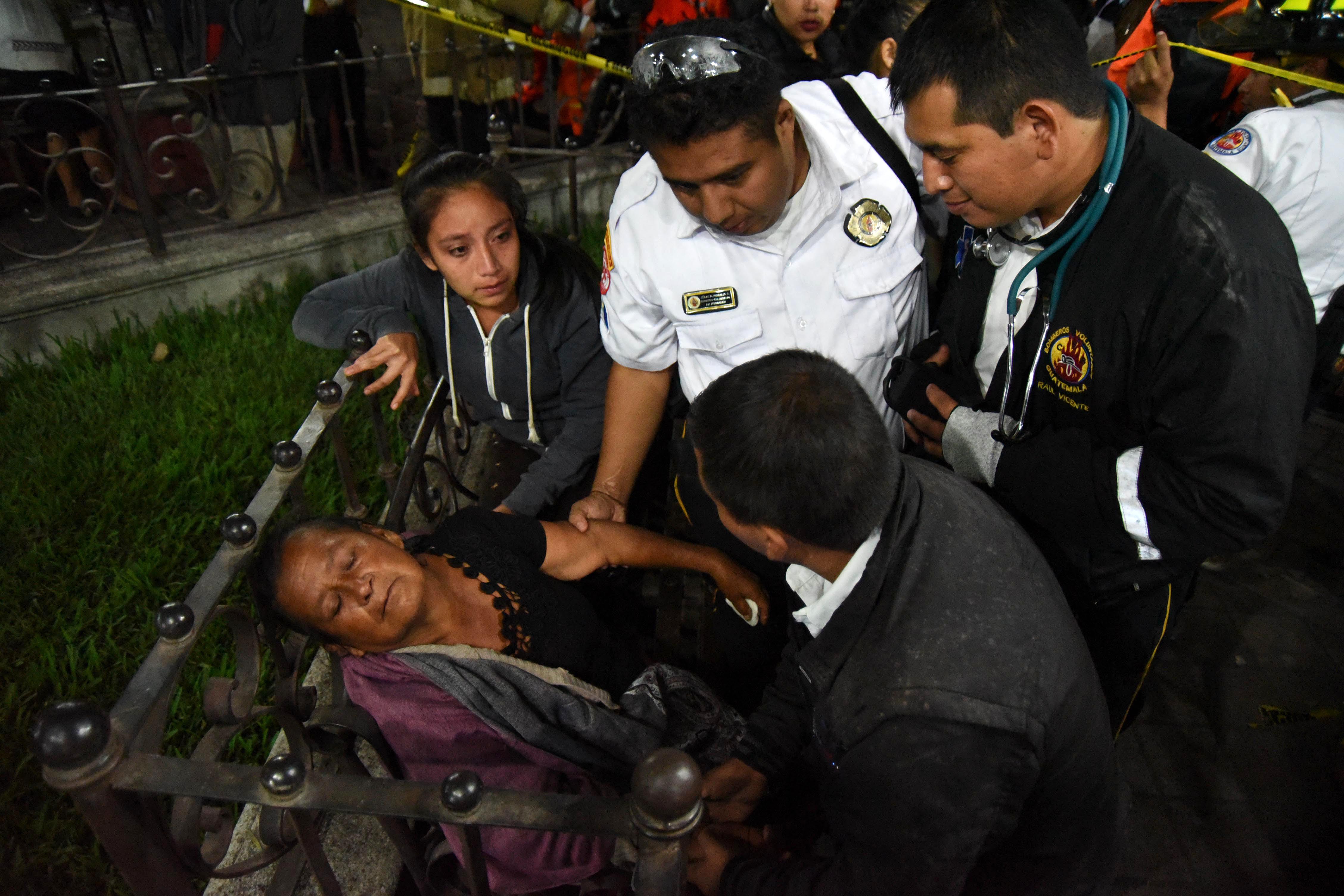 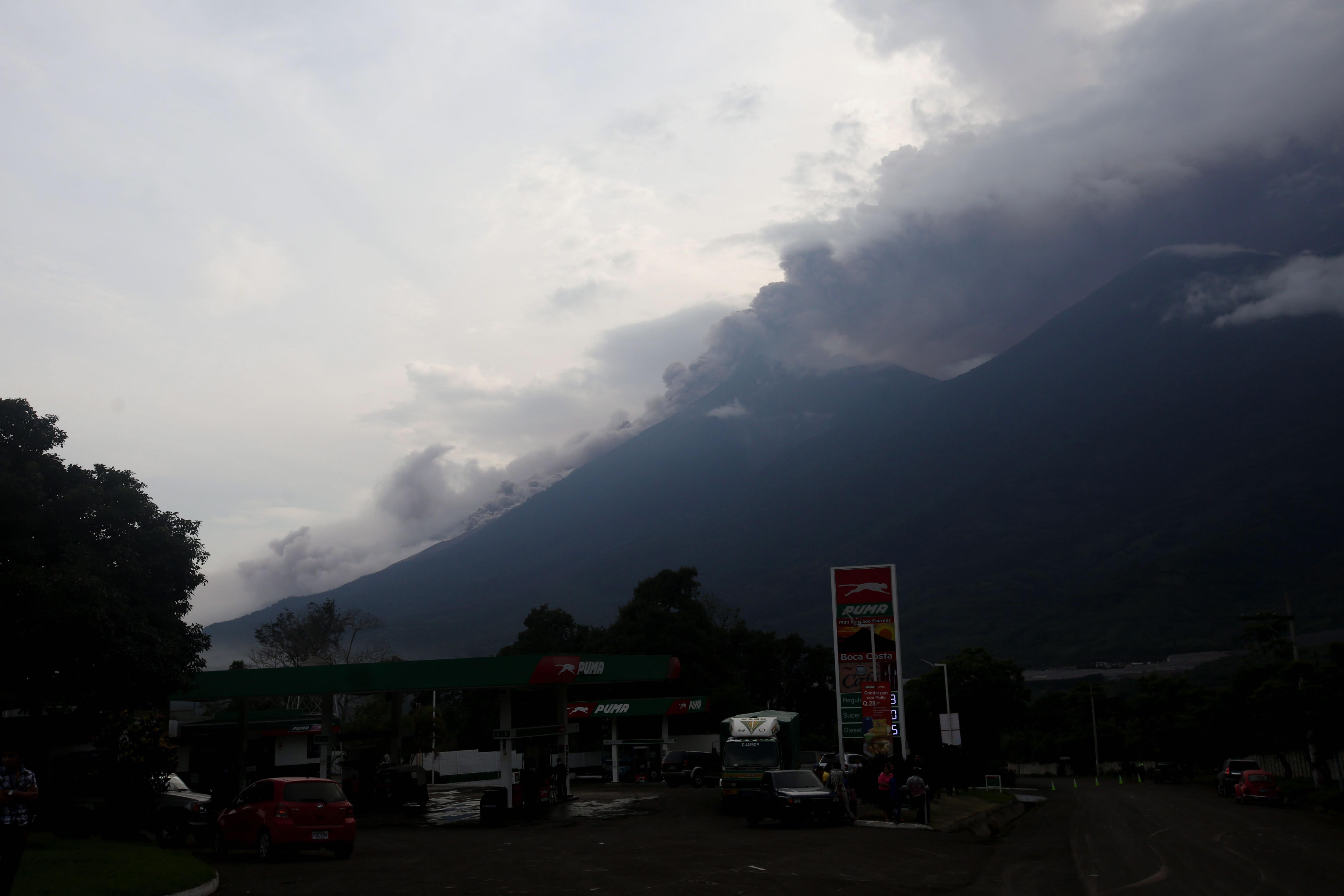 Richard Fitz-Hugh, a backpacker from Beaconsfield, Buckinghamshire, spoke to the Press Association from ash-covered Antigua, around 11 miles from the erupting volcano.

The 24-year-old trekked to the base camp of Acatenango, which lies around two miles from the deadly Volcan de Fuego, on Saturday.

"It was fine then, erupting as normal with lava flows but it was a lot worse today," he said.

"We heard there were a couple of people who were coming down (from Acatenango) early this morning when it started raining small volcanic rocks up to the size of your palm.

"I don't know anyone who has been physically harmed (on Acatenango), but obviously it wouldn't be completely safe being up high today – I'm sort of fortunate that I did it before." 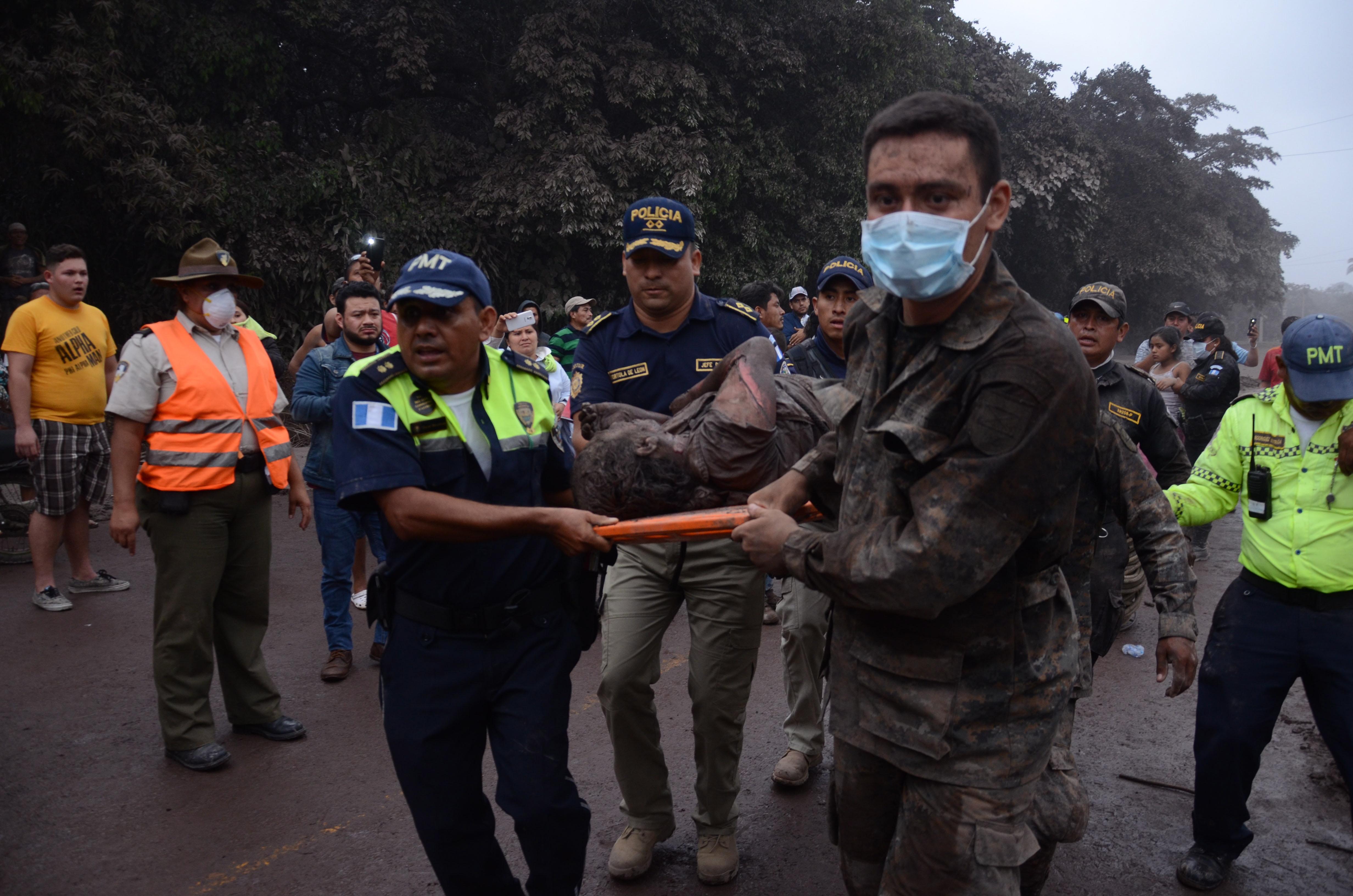 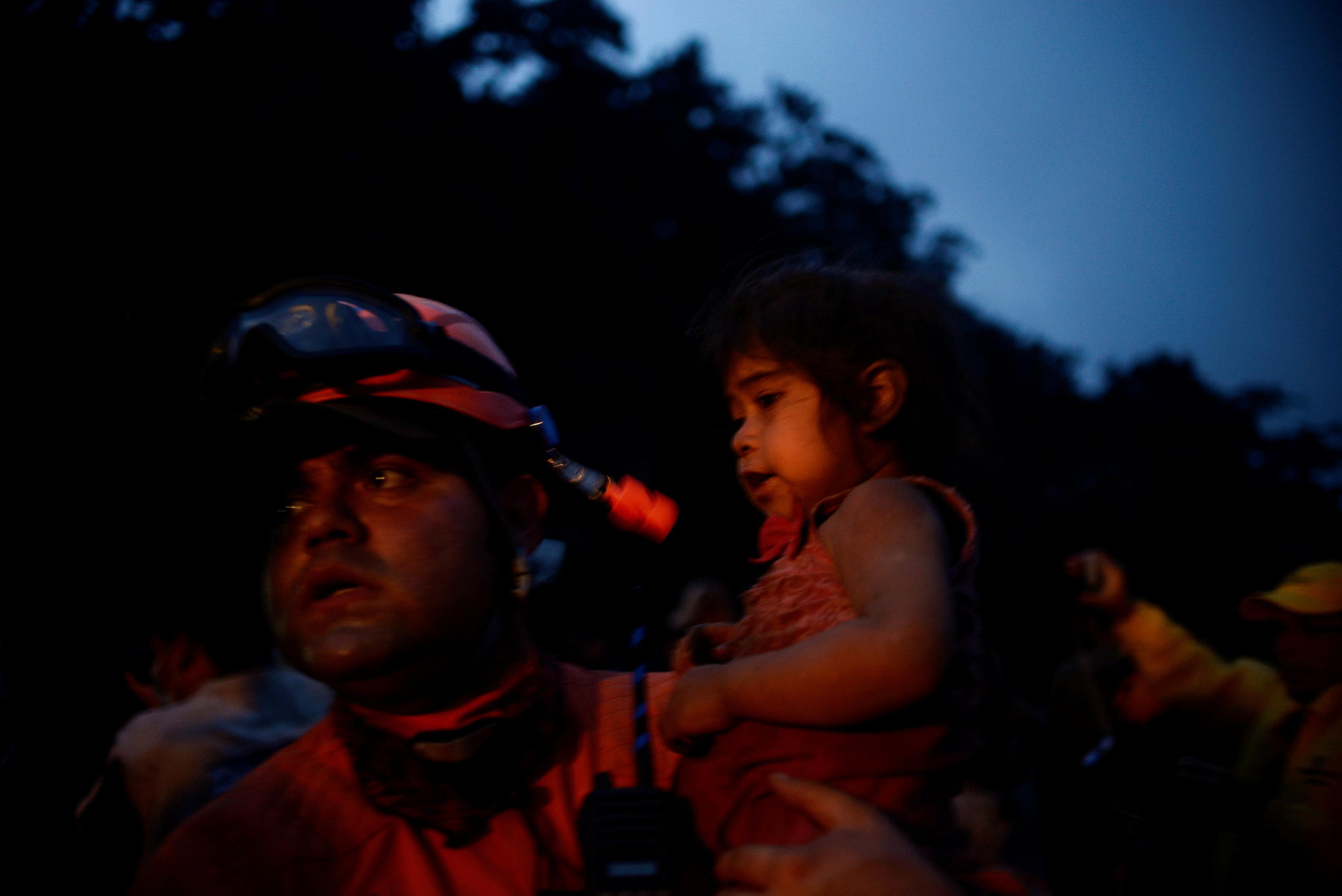 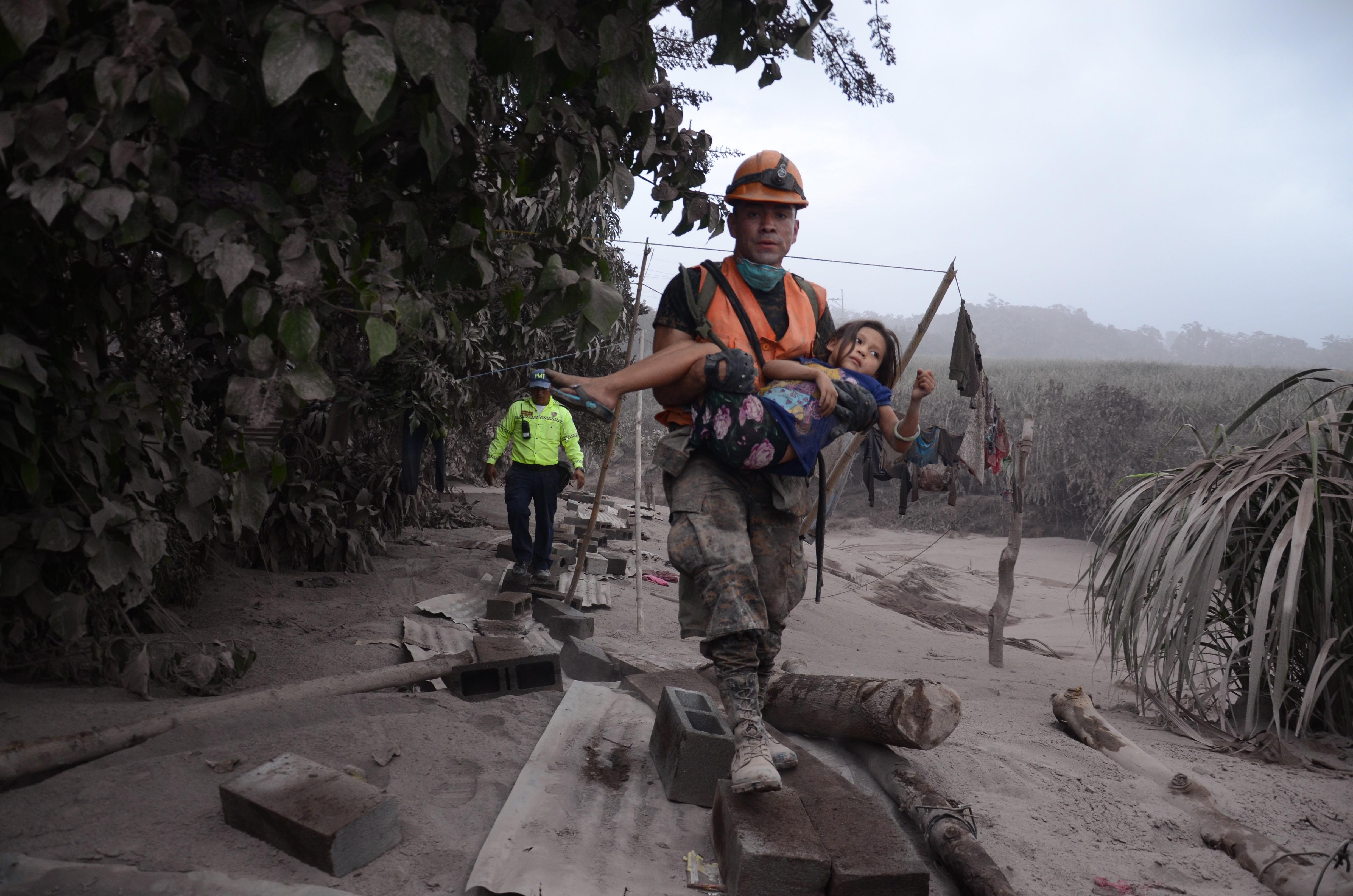 The Foreign Office has told Britons visiting and living near the capital, the city of Antigua and areas near the volcano to keep up to date with local officials' advice.

Mounring families were last night being comforted by emergency services after learning the fate of loved ones.

The active volcano is located 25 miles (40 km) southwest of the capital and workers and guests were evacuated from the La Reunion golf club.

The huge plumes of smoke that could be seen from various parts of the country and the ash that rained down in four of Guatemala's departments caused panic and sparked chaos on the streets.

People are being urged to wear masks to protect them from falling ash in four regions of the country. 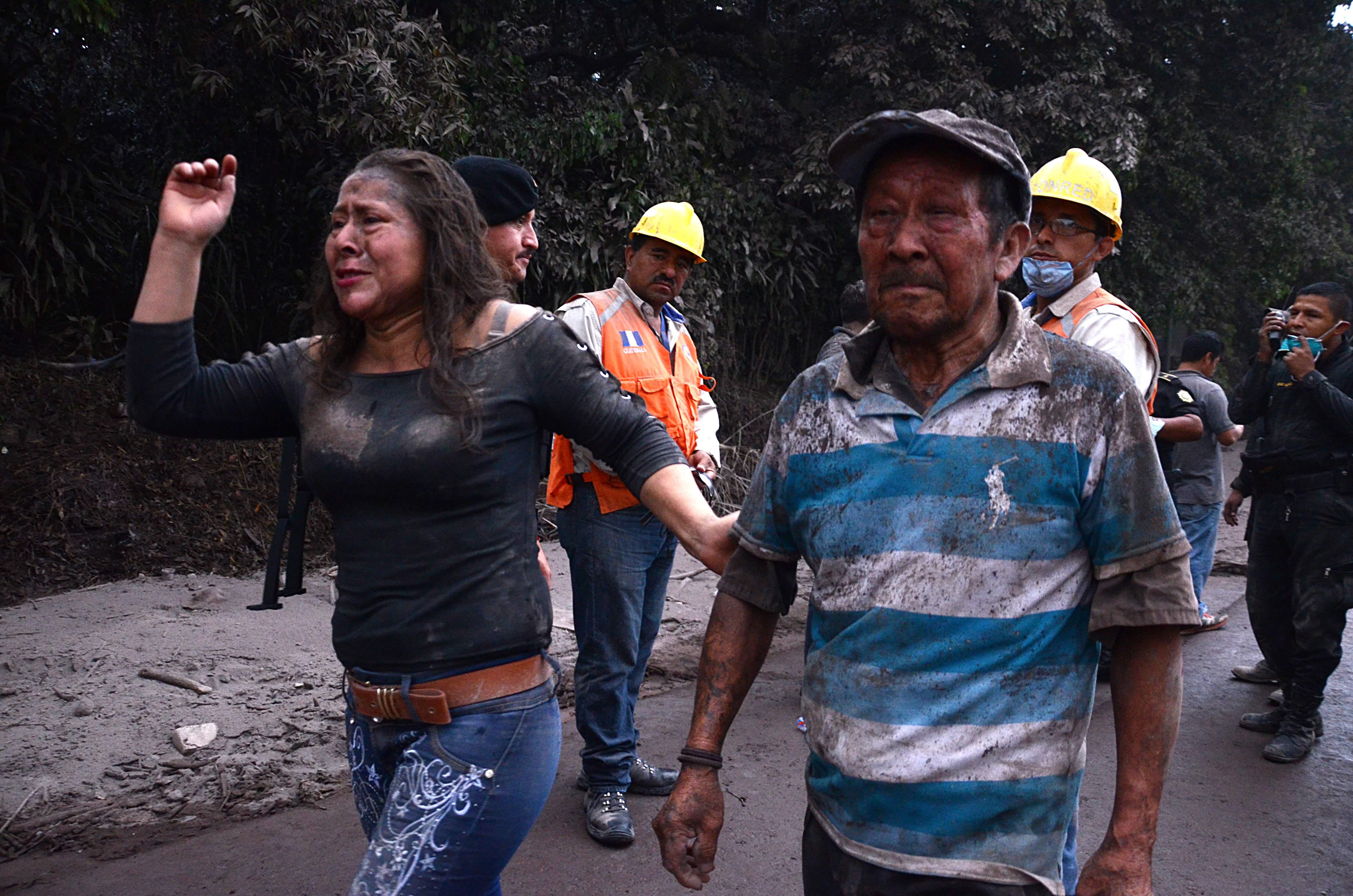 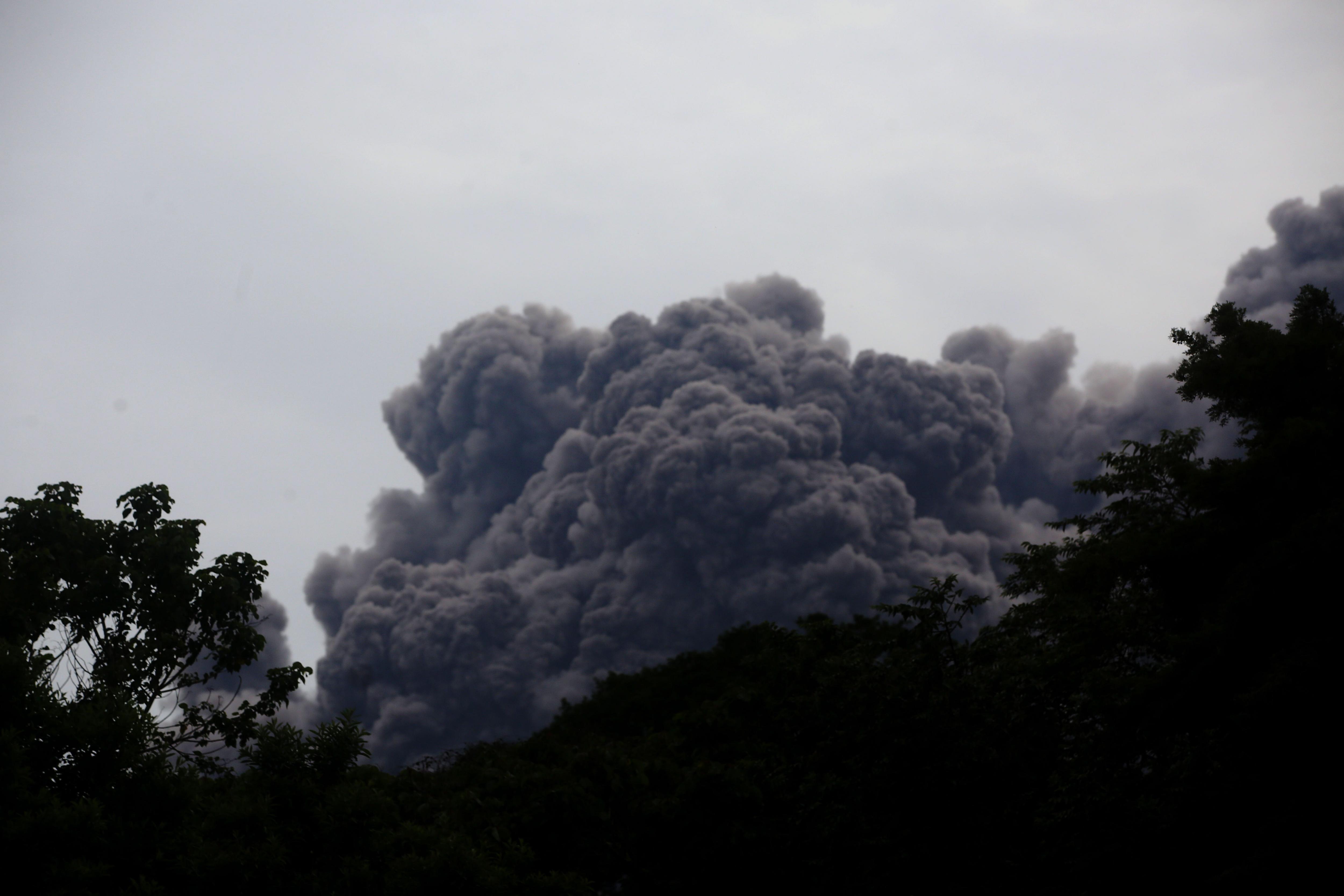 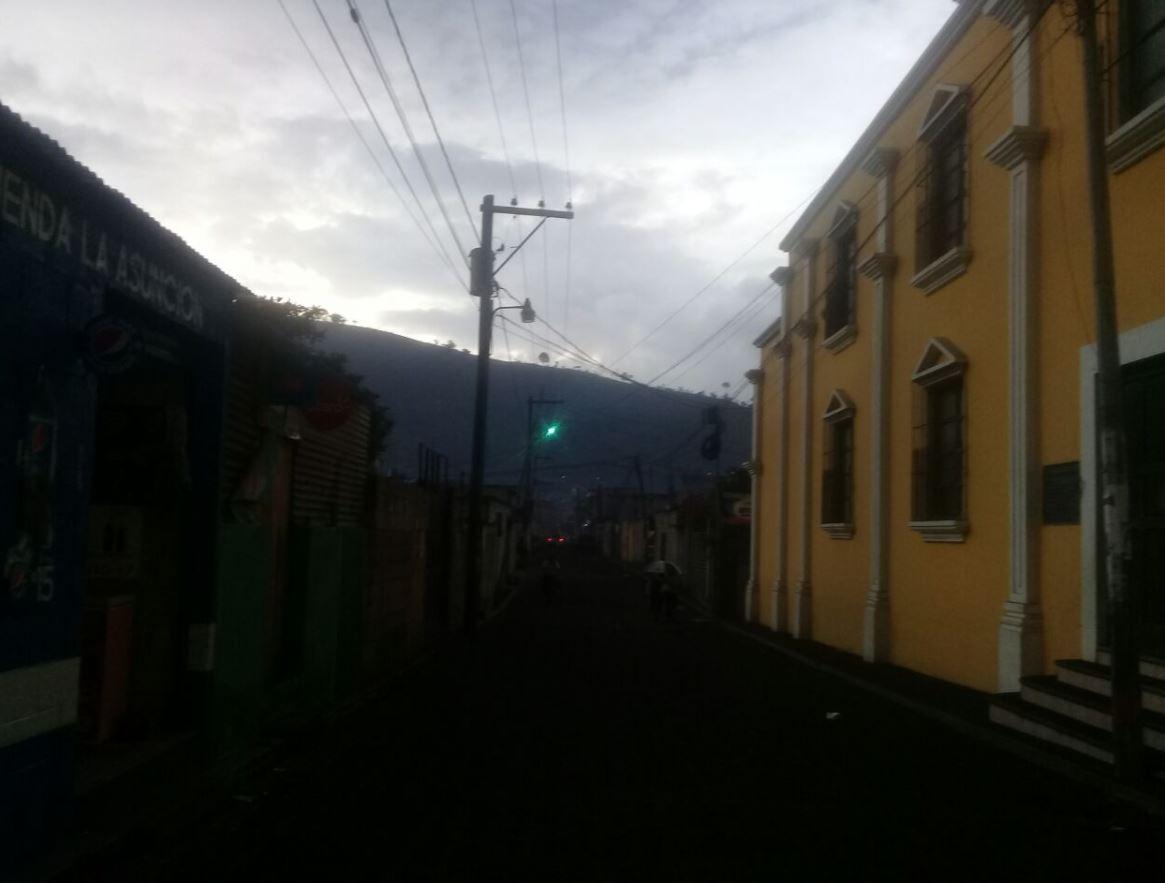 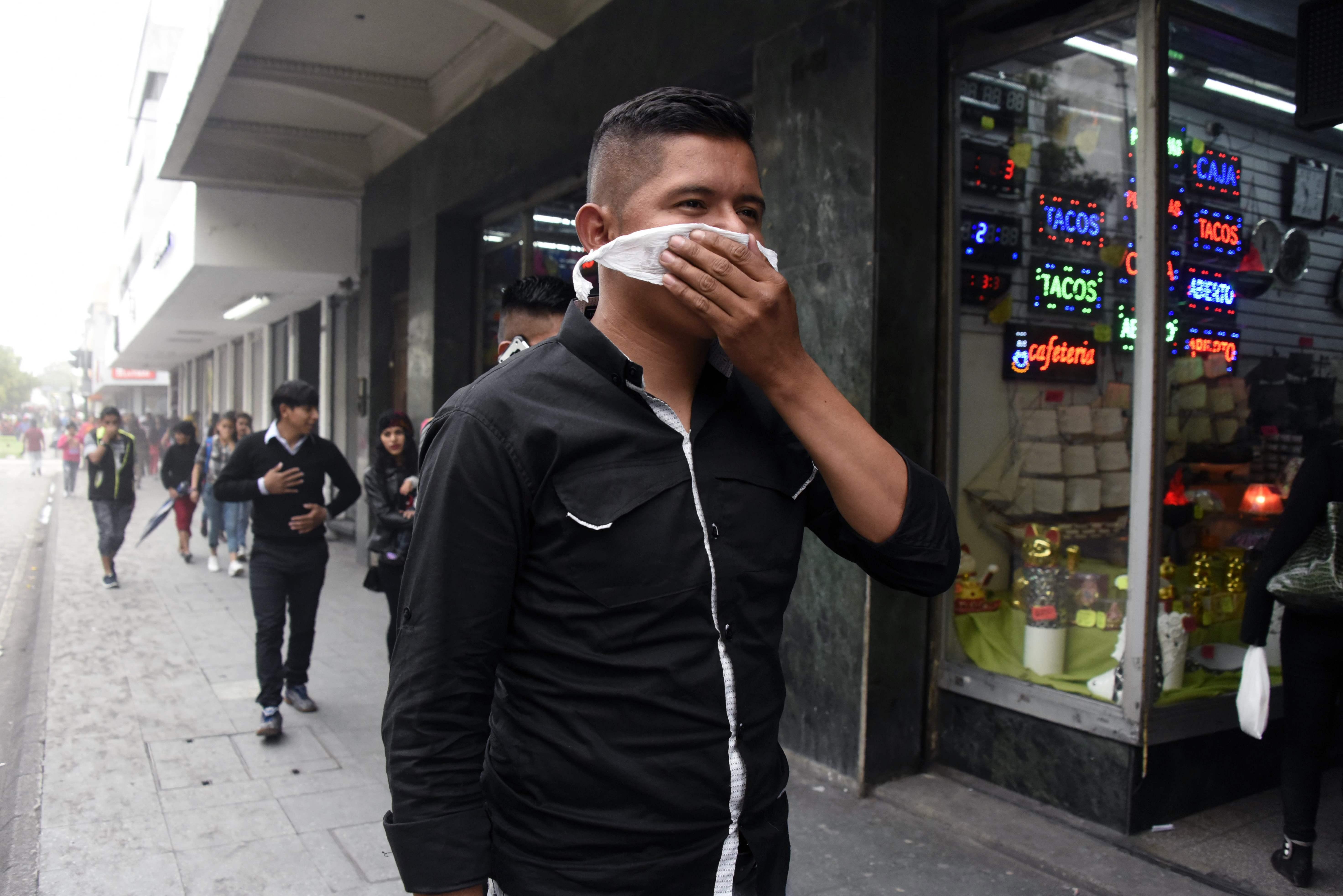 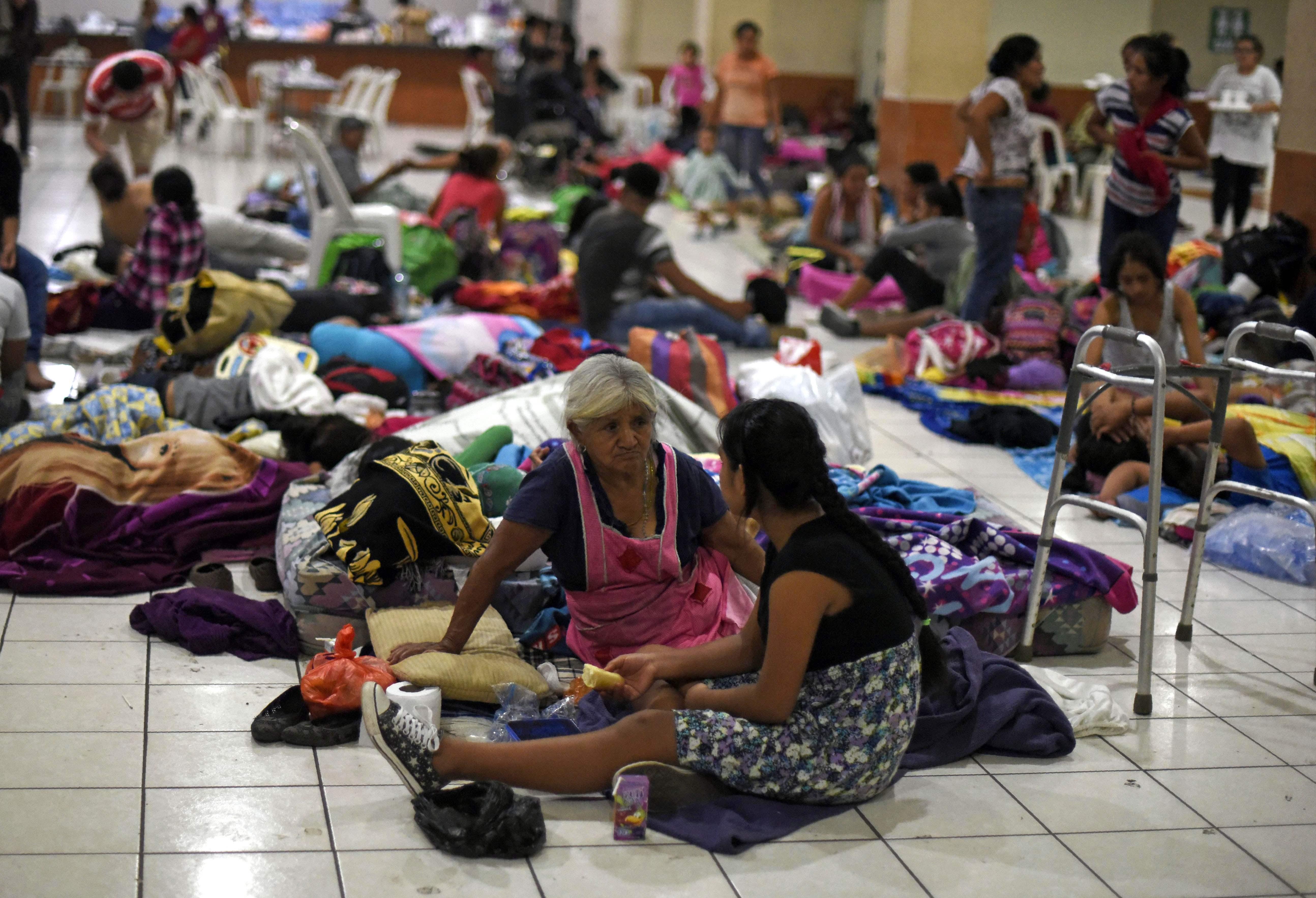 Sergio Cabanas, the general secretary of Guatemala's Conred disaster agency, said: "It's a river of lava that overflowed its banks and affected the Rodeo village.

"There are injured, burned and dead people. We are evacuating and rescuing people and have reports of 20 wounded, six dead and disappeared."

Hours later, the nation's civil defence revealed the death toll had risen to 25.

David de Leon, spokesman for the National Disaster Prevention Authority, said: "It is important to remain calm because the Fuego volcano erupts throughout the year." 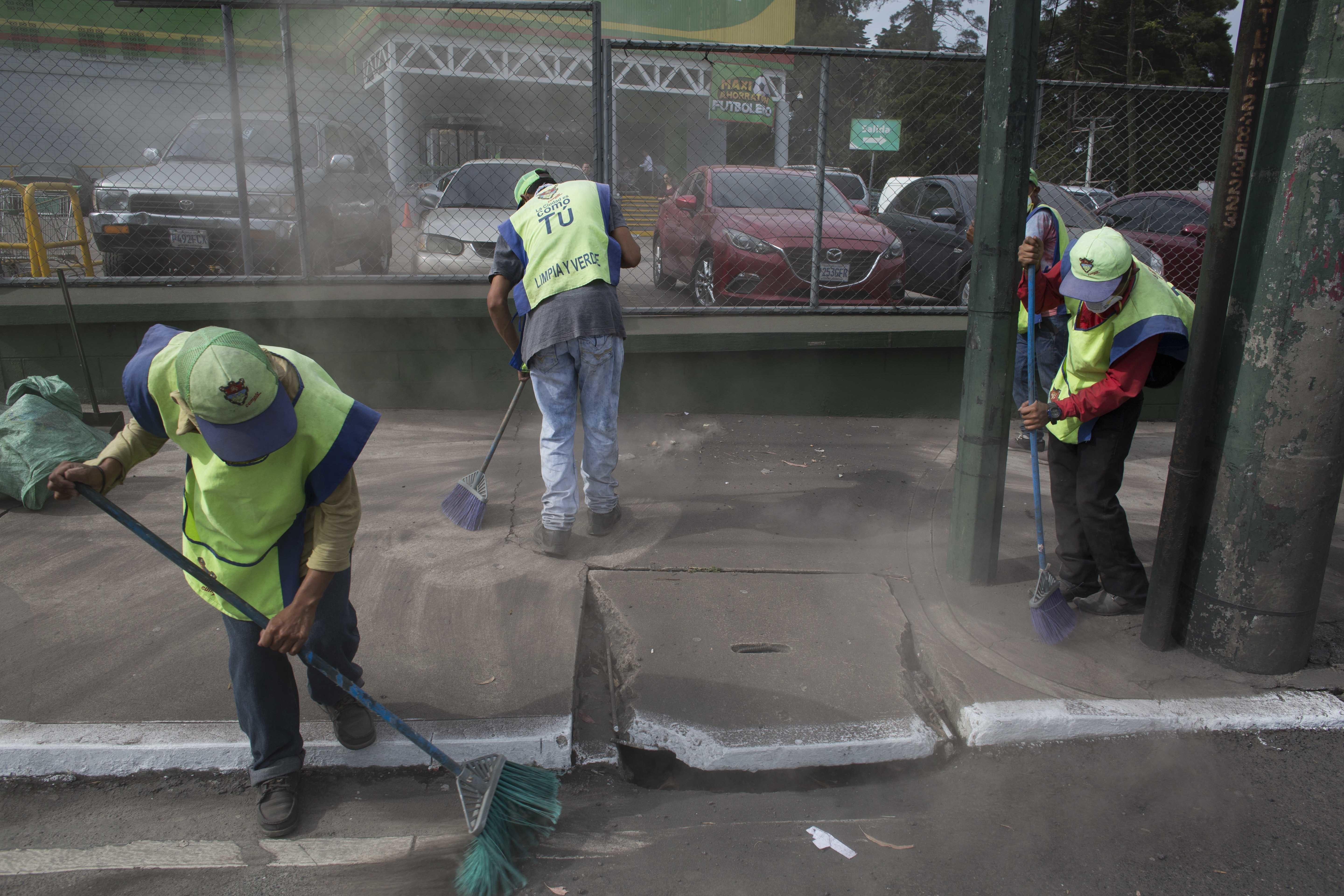 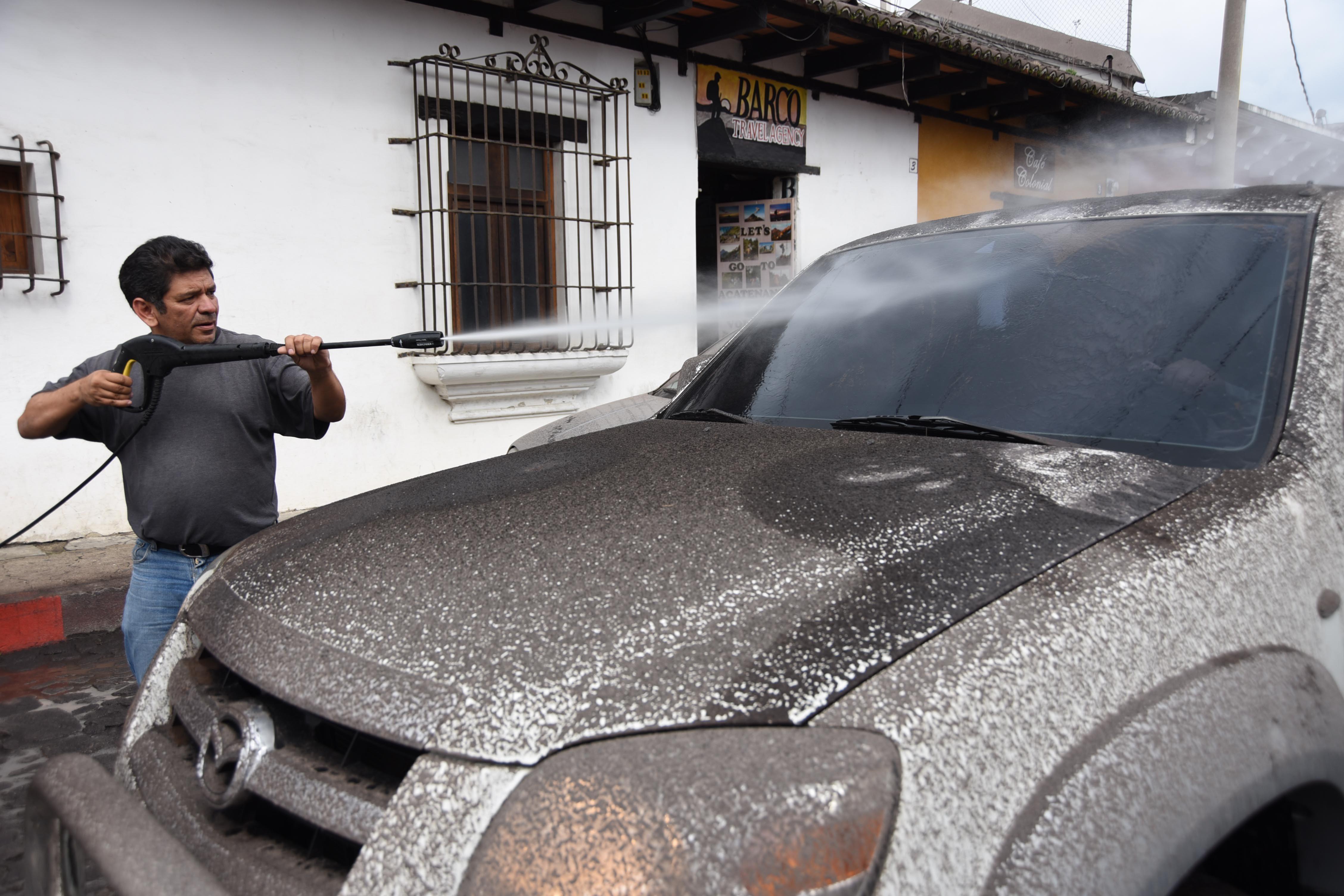 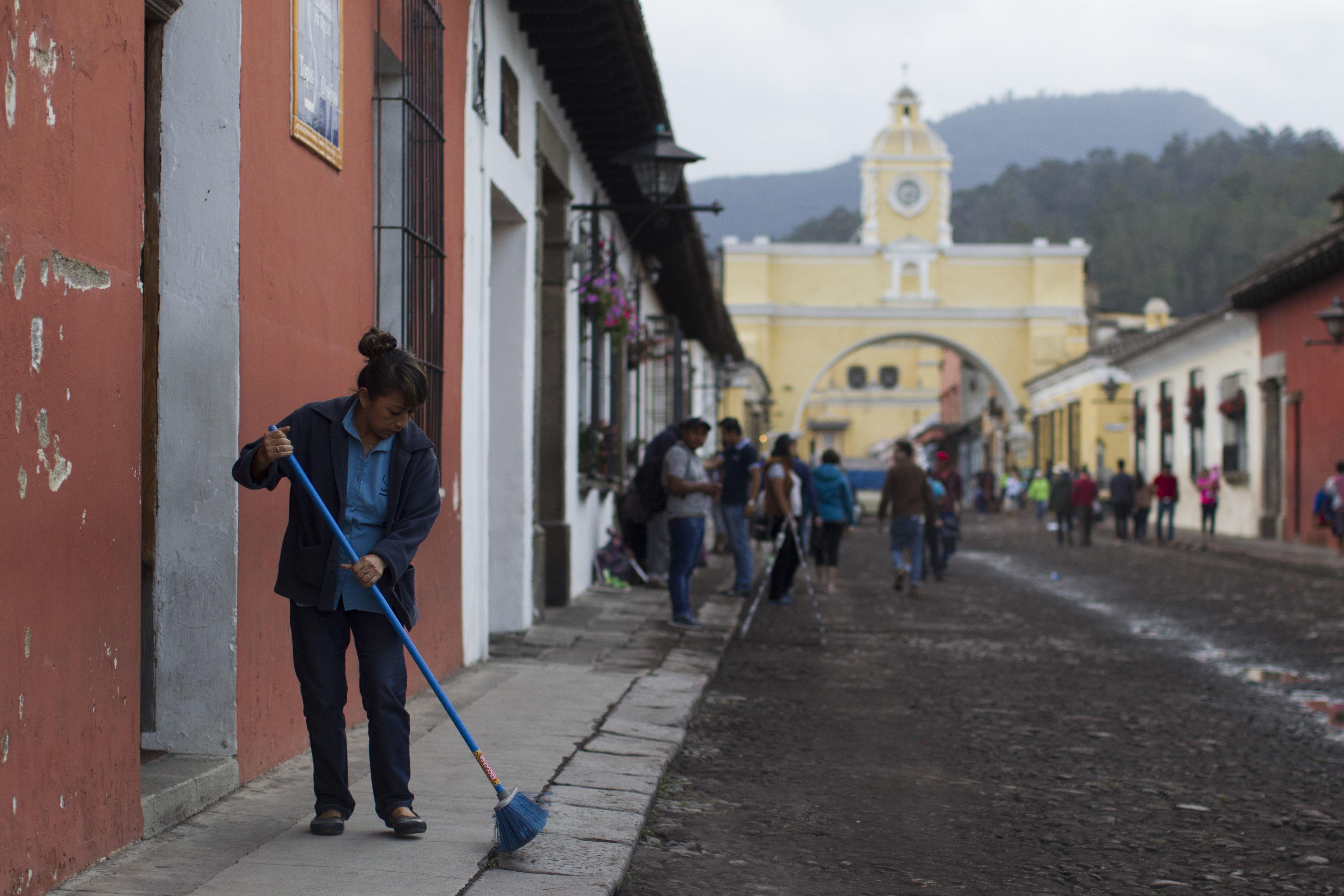 De Leon said a change in wind was to blame for the volcanic ash falling on parts of the city.

International assistance has begun to pour into the country with Israel saying it has delivered food and blankets to the country.

"Temperatures in the pyroclastic flow can exceed 700 degrees (Celsius) and volcanic ash can rain down on a 15 kilometer (9.32 miles) radius," said Eddy Sanchez, director of Guatemala's seismological, volcanic and meteorological institute.

"That could cause more mud flows and nearby rivers to burst their banks."

Last night, workers were sweeping ash off the runways to get the airport operating again.

Guatemala has two other active volcanoes, Santiaguito (west) and Pacaya (just south of the capital).

The conical Volcan de Fuego,  Spanish for "volcano of fire," reaches an altitude of 12,346 feet above sea level at its peak.