He’ll need the hair of the dog! Pooch is caught on camera downing his clueless owner’s pint after first checking the coast was clear

This is the hilarious moment a dog was caught sipping from his owner’s pint outside a pub.

Jake Pulford, 26, was passing the Errigle Inn in Belfast on the bus when he spotted the pooch standing on its back legs with its paws on a table outside.

The pet, believed to be a Shiba Inu, had been left alone and appeared to be scouring the scene for its owner to check the coast was clear – before sticking its face in the glass and taking a sip.

Mr Pulford managed to whip his mobile phone out in time to catch the moment on camera.

He said he expected the dog to regret its decision after taking the first lick, but claims the mutt seemed to ‘enjoy’ the beer and kept going back for more. 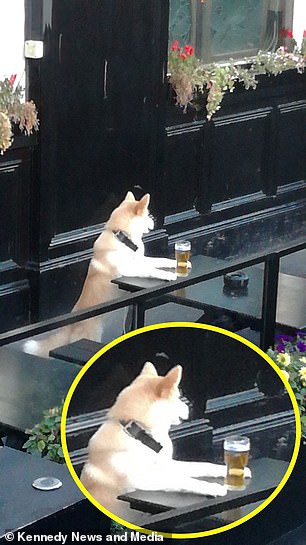 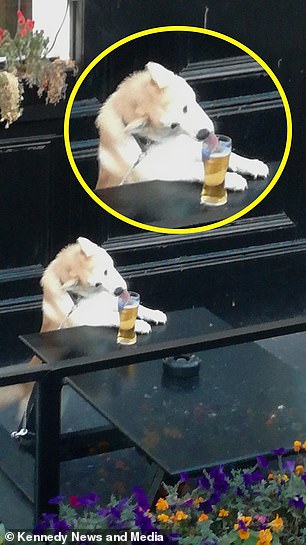 Jake Pulford, 26, caught this dog checking the coast was clear before taking a sip of its owner’s pint outside the Errigle Inn in Belfast

His friends found the pictures he took so hilarious, they convinced him to let one of them share it on Facebook

He said: ‘We’re known for our drinking [here] so apparently that goes as far as animals as well.

‘I just heard people laughing and looked out [the window] and saw the dog without its owner.

‘It had a lead attached to the table it was at so clearly its owner had just walked into the pub and left it alone for a little bit and that’s when it made its chance.

‘I was expecting it to recoil. I didn’t think that dogs would like anything like that. But it seemed to be enjoying it. 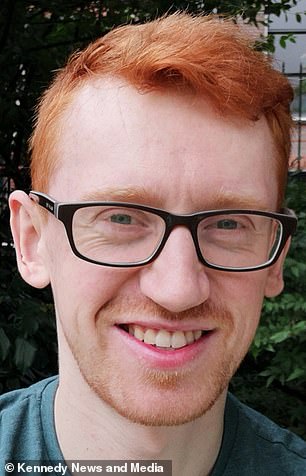 ‘It went in more than once – he was doing it a few times so he seemed to enjoy it.

‘I like funny animal pictures and videos online but I’d never actually seen something like that in person. It made my day.

‘I was laughing at the dog and I was trying to get the before and after pictures so I was just being very careful and zooming in.

‘There were a lot of other people on the bus laughing at the dog too.

‘I was looking at it and there was a before and after picture and it just lined up perfectly one after the other.’

When he shared his photos in a group chat with friends, they found it so hilarious they managed to convince him to share it online.

The two pictures were posted on Facebook with the comment: ‘Spotted checking the coast is clear at a Belfast pub.’

The post was liked, shared and commented more than 23,000 times.

Mr Pulford has not managed to track down the owner – but claims he would tell him about his devious dog if he got the chance.

The software developer said: ‘I’m happy that other people have seen it. I didn’t expect it to take off as much as it did. It’s probably the most popular picture I’ve ever taken.

‘I’m always on the lookout for little funny things but never on this level. It makes me want to take more pictures though.

Pictured: The dog was caught sipping from its owner’s pint glass outside the Errigle Inn in Belfast

‘I showed those two pictures to my friends in the friends group chat and my friend saw it and thought it was hilarious.

‘I told her to go ahead and post it on Facebook as she seemed to know what she was doing.

‘I was quite surprised it went viral as it was a picture I was only planning to share with friends. It wasn’t until my friend said that other people would appreciate it that we shared it.

‘If I saw the owner and had the chance then I’d probably tell him [what happened]. I always like to give credit for these sorts of things.

‘I feel bad that it got so much attention and yet the owner probably has no idea. I would totally tell him and show him the photos and the story.

‘I haven’t seen the dog since – funnily enough it was actually on a bus route I don’t normally take. I was going to a birthday party.

‘I’ve been down that route once since then and I was looking at the pub again but unfortunately there was so sign of it – but I will keep an eye out.’