More than half of workers expect NEVER to return to a five-day working week in the office, survey finds

More than half of workers have said they never expect to return to a five-day working week in the office, a new survey by broadband provider TalkTalk has found.

A new report called ‘Lockdown Lessons’ also found that 58% of people in employment said they felt more productive as a result of working from home.

Bosses also agreed, with 30% of business leaders saying the changes had seen a boost in productivity and 35% said the moves had seen more collaboration.

The new working arrangements for millions of office workers also found that with the commute being removed, many are turning to learning a new skill or hobby, the survey found.

Around 40% said they had watched an online educational video during lockdown and 16% enrolled in an online learning course. 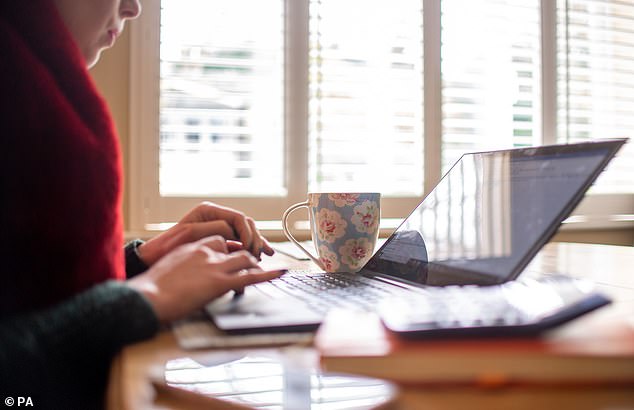 More than half of workers have said they never expect to return to a five-day working week in the office, a new survey has found

In other areas, nearly one-in-four work-from-home staff started learning a new language, with a similar number also learning new cooking methods. Around 15% said they researched baking and 13% learned about gardening.

TalkTalk added that internet usage during lockdown increased 40% year-on-year and has remained at high levels, despite the relaxation of rules and the reopening of pubs and restaurants. Uploads have also increased significantly, the data found.

The company is hoping the increase in work-from-home staff will lead to demand for more reliable internet and has launched a business-quality broadband service for companies willing to install faster connections in workers’ homes.

But less than half – 40% – of business leaders said they have provided financial support to employees for phone or home broadband bills and only one in four have invested in mental health and wellbeing apps for staff.

The survey also found that 62% of bosses believe they can save money to spend on upgrading home working due to less work trip costs and 45% said company entertainment spend is also expected to fall.

Tristia Harrison, chief executive at TalkTalk, said: ‘Lockdown Britain has seen a boost in skills and productivity for home workers, with unexpected lessons for how we emerge from the pandemic.

‘As people have been working from home, they’ve also been learning: from new languages, to cooking, to IT skills. With flexible working we’re becoming so much more productive it seems that Britain is now getting five days’ work done in four, which is encouraging as we build back from the crisis.’

Catherine Barnard, from consultancy Working The Future, which analysed the data for TalkTalk, said: ‘A future where a four-day work week is the norm could be a lot closer than people think.

‘If someone can do their work in four days rather than five as a result of flexible working hours, it stands to reason that they can use the fifth day to further improve skills that complement their role. The challenge is to pivot from a ‘one-size-fits-all’ approach to employment.’