Gaza City: Hamas and the Islamic Jihad movement said late on Saturday that a ceasefire agreement in the Gaza Strip had been reached with Israel.

Mediation led to an agreement to end the largest daytime assault on the Gaza Strip by Israel in four years, Hamas spokesman Hazem Qassem said in an emailed statement.

Local media quoted senior Hamas officials, speaking on the condition of anonymity, as saying that senior Egyptian security intelligence and the United Nations special envoy, Nicolai Mladinov, mediated the ceasefire. The reports could not be verified.

Sirens warning of incoming rockets still wailed in southern Israel early on Sunday and it was unclear if the cease- fire was holding.

The Israeli assault targeted dozens of Hamas military facilities and killed two Palestinian teenagers. The Gaza Health Ministry said the two, 15 and 16, died when the building they were standing near was hit. Fourteen others were wounded.

The Israeli army said the high-rise in Gaza City was being used by Hamas as a training site for militants and that residents had been warned in advance.

The strikes, which also included weapons manufacturing sites and storage facilities, came after a barrage of Hamas rockets were aimed at Israel late on Friday and Saturday. 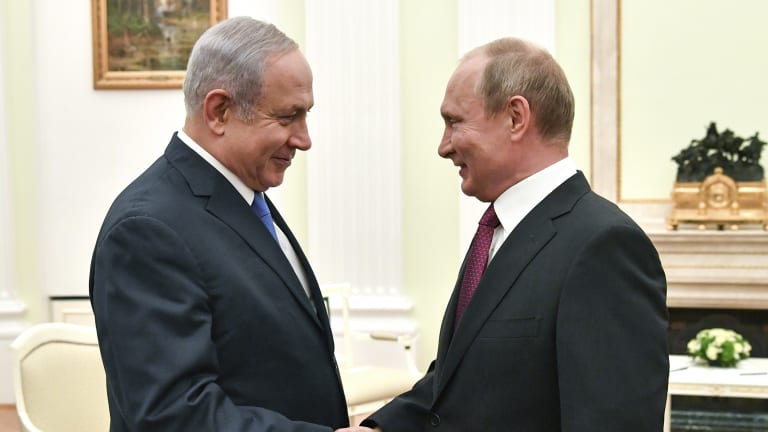 Russian President Vladimir Putin, right, shakes hands with Israeli Prime Minister Benjamin Netanyahu during their meeting at the Kremlin in Moscow on July 11.

Prime Minister Benjamin Netanyahu said Israel "will intensify the strength of the attacks if necessary".

The escalation in violence sparked fears that a wider military conflict could erupt after months of heightened tension along the Gaza-Israel border.

It was the largest daytime attack by Israel on the coastal enclave controlled by the Hamas Islamist group since the 2014 Israel-Gaza war, an army spokesman said.

Hamas spokesman Fawzi Barhu said the rocket fire was meant to "send a clear message" to Israel and to "force the enemy to stop the escalation".

He was referring to a border protest Friday in which two Palestinians were killed. 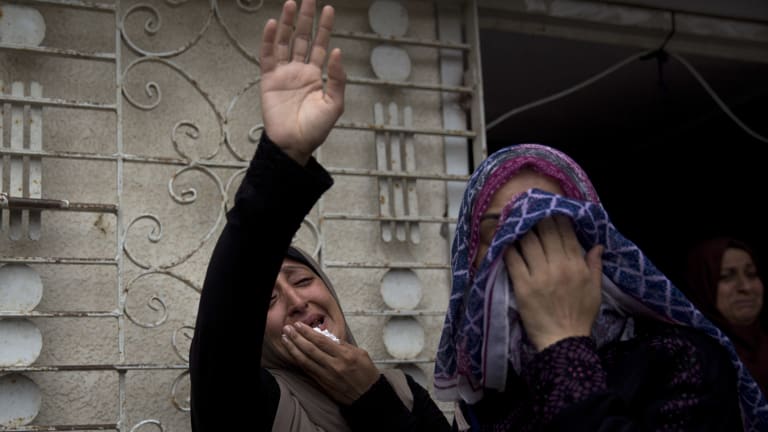 Relatives of 15-year-old Othman Hellis, mourn during his funeral in the family home in Gaza City, Saturday, July 14. Hellis was killed on Friday at a border protest.

Clashes in eastern Gaza with the Israeli army forces resumed Friday as part of rallies and protests organised since March 30.

Protesters are calling for a lifting of the Israeli blockade on the coastal enclave and a return to lands in present-day Israel that Palestinian refugees had fled.

According to the Palestinian health ministry, 140 Palestinians have been killed and more than 16,000 injured in the clashes since March 30.