I almost threw this away a month or so ago when I was cleaning out my daughter’s toy cupboard. This little American flag. The kind we wave around on the 4th of July. Because we’re Americans. 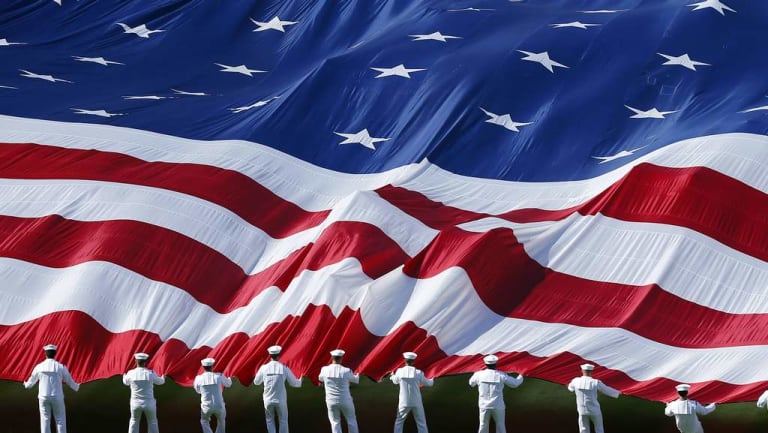 Forget the Stars and Stripes: right now, when anyone thinks about the US, they think “Trump”.

It’s been hard to claim that lately, though. To be an American. Easier in a foreign country where we can tune in and out of the news from the US with the push of a button or the swipe of a screen. We can avoid it in polite conversation. But we feel it. The shame.

I’d thrown it in a box in an upstairs closet, this flag – into one of those “to be sorted later” boxes when we’d moved in. My six-year-old must have dug it up on one of her secret mining expeditions through all our worldly possessions.

Because here it is again. The flag. Out of nowhere. Like it knows it’s its birthday.

It’s the 4th of July back home in the US. Yes, I still call it home even though I’ve lived in Melbourne for almost 10 years. Even though I have a daughter who was born here. Even though I have a home here. There’s a part of me that knows, no matter what they say about the heart, home is where you come from. We all have roots.

And my roots stretch all the way back to the dark heart of California, the Central Valley, where 25 counties went to Donald Trump in the presidential election. Since then, Trump supporters nationwide have come out loud and proud, crude and rude. Emulating the example Trump sets.

And isn’t that the thing? Isn’t that today’s America? Trump. More so than the flag, more than the statue of liberty, more than the pledge of allegiance or the national anthem. Right now, when anyone thinks about the US, they think “Trump”. Headlines, front pages, special segments. Trump.

The narcissist wins. He’s become the face of America, whether America likes it or not. Trump has burned down the American flag and raised a new effigy in its place. Himself. And I’m beginning to wonder how many Americans are OK with that.

Clearly Trump, his administration and his supporters are fine with it. It wasn’t until just last month that the government reportedly stopped separating immigrant children from their families and detaining them in holding facilities under the “zero tolerance policy”.

US Attorney-General Jeff Sessions said if you don’t like it, don’t “smuggle” children over the border. Simple enough. Fairly black and white. But not very red, white and blue. I thought America was supposed to be the mother of exiles. At least that’s what the statue of liberty says. 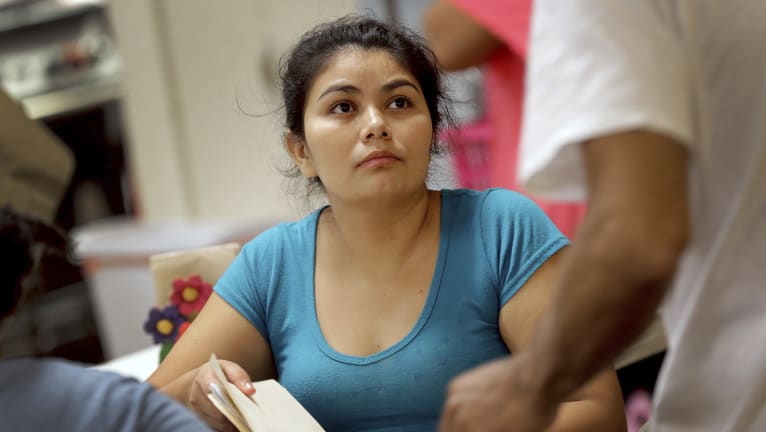 Carla, a migrant mother from El Salvador, waits with other parents in detention in Texas to be reunited with their children.

No matter how US law ultimately determines the fate of these immigrants, these refugees, these exiles, they are human beings and deserve to be treated with decency and respect when, until, and after the law is applied. It’s unfathomable to me that children, babies, toddlers all the way up to 10 or 12-years-old have been taken away from their parents and held in “tender age facilities”.

In some cases, they were deceptively separated when agents told the parents that the children were going to have a bath and then were never returned. And even now, now that families aren’t being separated any more, so we’re told, those families that have been separated have no assurance of when or if they will ever be reunited.

I know there’s been push back. I follow the news. There have been massive public demonstrations protesting this barbaric behaviour. And though it seems hopeful that Trump back-pedalled and signed an executive order contrary to his interests and ended family separation at the border, it was really just a snake-oil salesman’s deal. You gotta read the fine print. The order is only good for 20 days. It doesn’t override the 1993 Flores v Reno Supreme Court case that says detained migrant children can’t be held in government detention facilities for more than 20 days. So, basically, this means that after the 20-day mark, while parents remain in these detention facilities, their children could still be separated from them and held in other locations.

This is what I think about when I look at this little American flag right now. Alone in my kitchen in Melbourne, Australia.

I feel like I’m watching “home” shrink away into a caricature of itself, into its nationalism, into its isolationism, into its cannibalism, into its ends justifying its means, into its blessed, bloody, Twitter-delivered independence. Not unified but divided. Not one nation under God, indivisible with liberty and justice for all. A country at social war with itself, forgetting its moral principles and human values.

Nothing great about it. Nothing I feel proud of. Nothing I can pledge my allegiance to. All I can do is exert my God-given right to free will and put this flag away until it represents us again. No hamburgers and apple pie this 4th of July. With hand over heart, I take a knee. Happy birthday, America. I’m going to sit this one out.

Aubrey Perry is a Fairfax columnist originally from the United States.