Victorious workers march back through the gates of Belfast shipyard after facility salvaged in $7.3m deal. 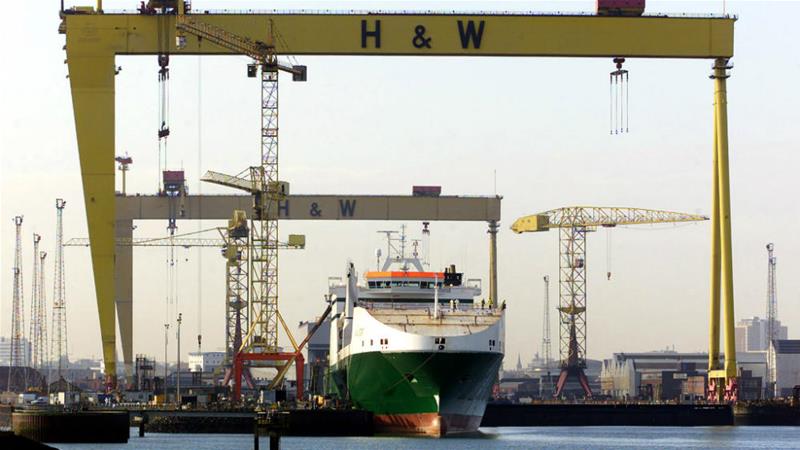 Harland and Wolff employees have returned to work at the shipyard after the sale of the closure-threatened facility.

When the shipyard – famous for building the ill-fated Titanic – entered administration earlier in summer, many staff accepted a redundancy payment.

But a group of 79 workers held a sit-in occupation protest for the past nine weeks, and were reinstated when Harland & Wolff was rescued by new buyers this week.

There were cheers as the workers walked through the gates in Belfast at 9am.

Harland and Wolff was bought for 6 million pounds ($7.3m) by InfraStrata, a London-based company that specialises in energy infrastructure projects.

“Everybody is ecstatic at what has happened, we believed in ourselves, we believed in the company, we have been proved right,” he said. “It’s a great day for the workers of Northern Ireland.”

InfraStrata said it planned to increase the size of the workforce by several hundred over the next five years.

Earlier this week, chief executive John Wood said: “Harland and Wolff is a landmark asset and its reputation as one of the finest multipurpose fabrication facilities in Europe is testament to its highly skilled team in Belfast.”

Shadow Northern Ireland secretary Tony Lloyd and Ulster Unionist MLA Andy Allen were among a number of supporters who turned out on Thursday morning.

Steel worker and Unite union shop steward Joe Passmore addressed the workers briefly before they walked through the shipyard gates:

“What we have achieved has been historic,” he said. “Every one of us needs to be extremely proud of ourselves. We can see what we are going to achieve when we go through there – it’s going to set the world alight.

To further cheers, he added: “Now, let’s get back to work.”