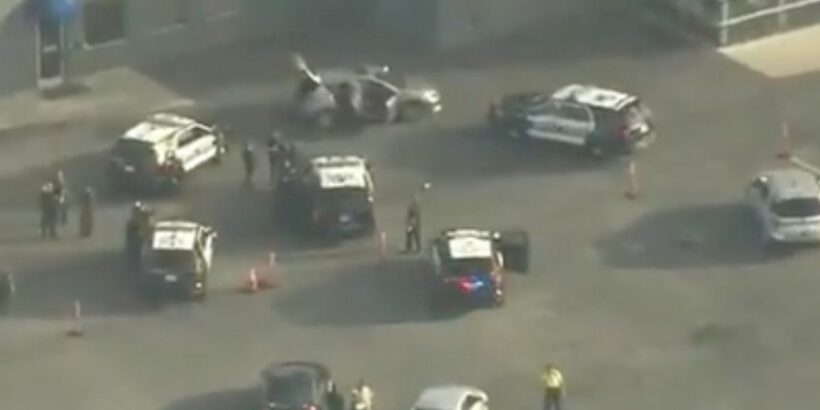 Prince Harry has reportedly boarded his flight back to the UK after a security scare at LAX airport.

The Duke of Sussex was seen arriving at Los Angeles International Airport to head back to Britain in a black SUV on Thursday evening, according to the Mail Online.

Around an hour before his flight, there was a security breach on the south side of the airport, near FedEx.

A drive broke through a fence at the cargo facility around 6pm and led police on a chase before being detained.

Cops said there were no injuries from the incident, but two runways were shut down as the chase was unfolding.

Clips of the chase showed a huge police presence at the airport.

Harry's flight to London took off around 45 minutes later.

It's unclear at this time what the driver's motive was or if they were attempting to reach any flight or person at the airport.

Prince Harry and brother William will appear side by side at the unveiling of the statue of their mother on July 1, on what would have been her 60th birthday.

The ceremony will be the first time Harry and William appear together since the funeral of their grandfather, Prince Philip.

It'll be just the second time the royal siblings will appear together since Harry and wife, Meghan Markle, spoke to Oprah Winfrey in a televised bombshell interview.

The brothers are expected to walk together to the statute and give separate speeches afterward.

Reports also claim the Duke of Cambridge's wife, Kate Middleton, will be acting as something of a mediator between Harrry and William, to help them 'put a united front at the unveiling'.

The Diana memorial was commissioned by both Harry and William back in 2017, to "recognise her positive impact in the United Kingdon and around the world."

It's believed the statue was completed last year but Megxit, Covid pandemic, and the funeral of the Duke of Edinburgh pushed it back.

It will be installed at the Sunken Gardens, believed to be Diana's favourite spot on the Kensington Palace grounds.

Harry and Meghan, Duchess of Sussex, moved to the US last year after stepping down as seniors members of the royal family.