Official merchandise such as bone china mugs for £55 is being sold inside Windsor Castle in competition with local stores and street traders selling fridge magnets, scarves and baseball caps mementos for £10 to cash in on Saturday’s wedding.

In the official store at the castle – just yards from the alter where the Prince will make Meghan his Princess at St George’s Chapel – commemorative items like a plate and cup and saucer are individually priced at £55 each. 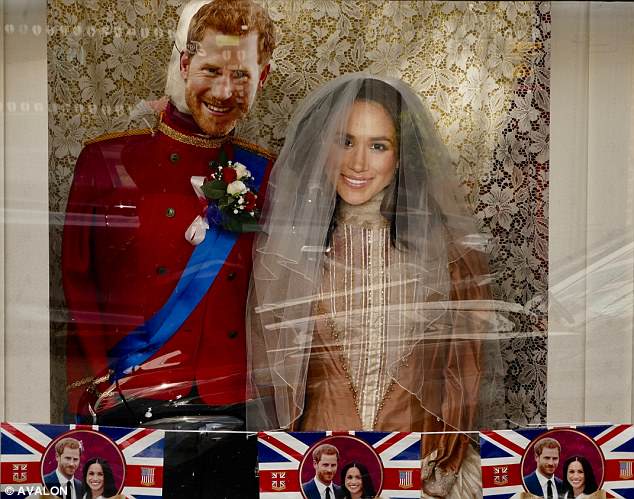 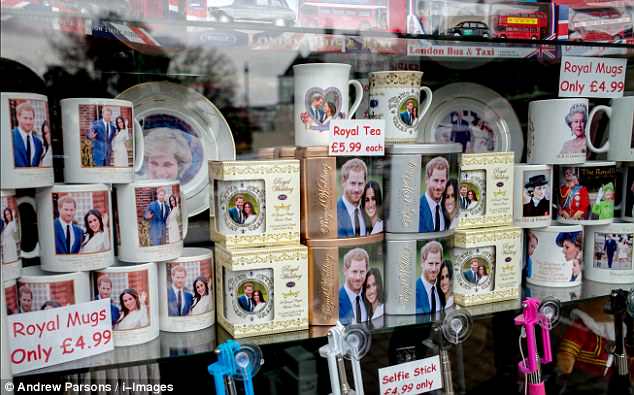 Official merchandise such as bone china mugs for £55 is being sold inside Windsor Castle in competition with local stores and street traders selling fridge magnets, scarves and tea towels mementos for £10 to cash in on Saturday’s wedding 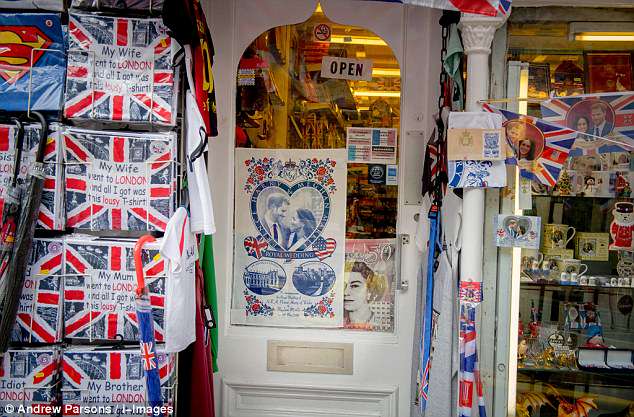 Traders are selling cups featuring Meghan and Harry on them for £4.99 around Windsor Castle

One member of staff inside the chapel bookshop which has royal wedding tea cups, saucers and plates for sale said: ‘These are high quality items which will be sought after as they are of limited number of no more than 250.’

A sign in the store says ‘The Limited edition range has been exclusively created for Saint George’s Chapel with a couple will wed on 19th May 2018.

‘Hand decorated in England with 22 carat gold and platinum details, each piece features an intertwined M and H on a pearlescent background. The design features golden cornets with platinum roses, daffodils, shamrocks and thistles – the symbols of the United Kingdom.

‘The coaster, beaker and teacup and saucer are limited to 250 pieces, the plates are a limited edition of 125.’

But the assistant added: ‘They will sell out very quickly and probably before the wedding on Saturday.’

Other items marking the nuptials include Harry and Megan champagne, teacloths, and Christmas decorations in the shape of love hearts. 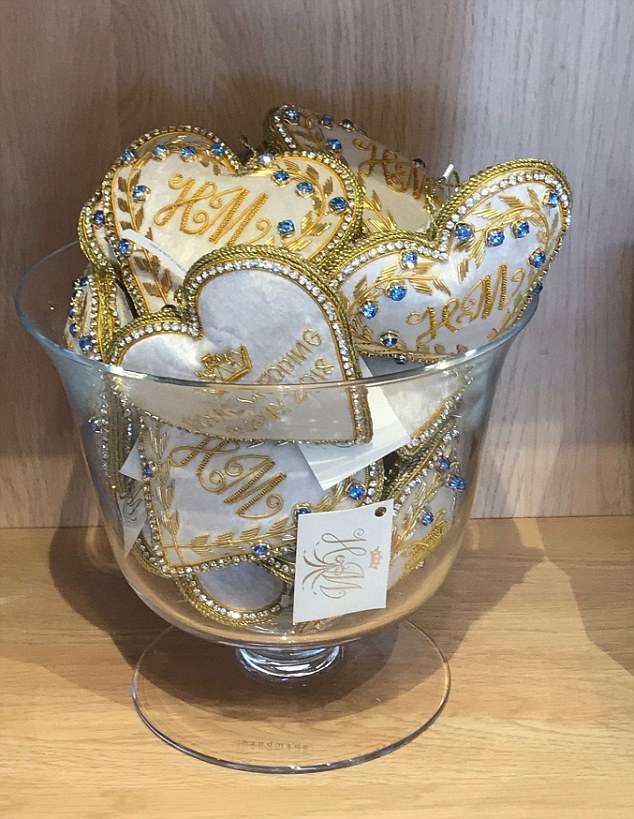 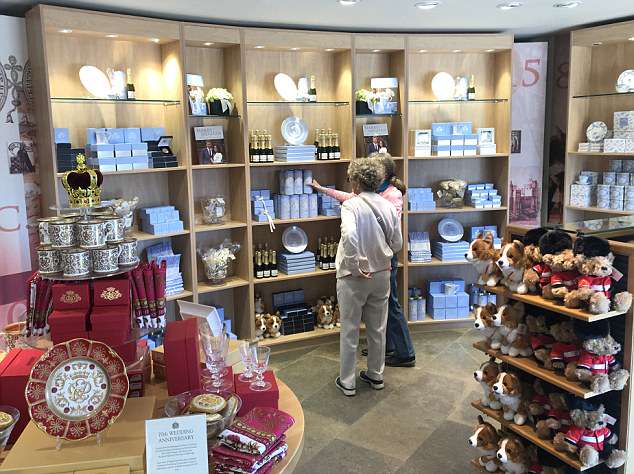 Royal fans peruse the official memorabilia on sale, which is more expensive than some of the items being sold by local shops and traders. Other items marking the nuptials include Harry and Megan champagne, tea cloths, and Christmas decorations in the shape of love hearts

American tourist Mary Johnston from Orlando, Florida, gave the official shops inside Windsor Castle a miss in favour of a store outside the gates.

She said: ‘I think the royal wedding is wonderful. Good for him and her if they were able to pick each other rather than being told who to marry. So it’s not an arranged royal marriage.’

Asked about the vast number of items on sale to cash in on the wedding, she said: ‘Quite frankly it’s not much different to what happens in America with the sales staff.

‘If they can commercialise it then they will.’

She revealed that despite her trip coninciding by chance with Saturday’s wedding, she will not be turning out on the streets despite staying close by with a friend.

‘I’ve got arrangements on Saturday which had been organised sometime back. I won’t be able to go ago.

‘But my friends back home can’t believe that I won’t be there.’

Her friend Lauren Tucker from Cincinnati who lives in Buckinghamshire said: ‘I think it’s fabulous as an expatriate American.

‘It’s all part of the sweet charm of this country and to be here in Windsor when they are putting all the flags out with all this excitement is wonderful.

‘But I think that Harry and Megan really love each other and that’s the most important thing regardless of everything that’s on sale.’

On the streets Tracey Kenny was among the licensed Street sellers allowed to trade caps, scarves, magnets, pencils, badges and other items on the pavement.

She said: ‘I’ve come down from Litchfield and I’ll been paid to sell the items. I don’t know who the owner is I just sell them and I normally sell football materials.

‘I do think that all this stuff with Harry and Megan’s name and pictures on them will be very popular as we get closer to Saturday.’

Susie, a sales assistant in Edinburgh Woollen Mills, which is opposite the gates at Windsor Castle, said teacups and saucers with Harry and Megan’s name and picture on them were selling fast and we’re the most popular choice at £8 per piece.

She added: ‘The Americans are particularly keen on buying the souvenirs. They really love the royal family over there.’ 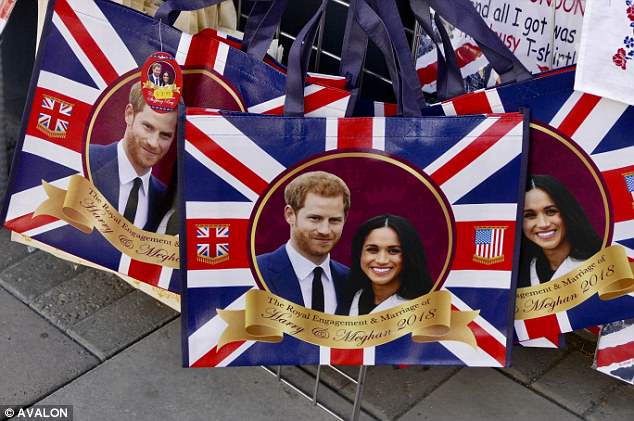 Among the cheap items on sale for tourists are Meghan and Harry tea towels, mugs, thimbles, and t-shirts. Susie, a sales assistant, said teacups and saucers with Harry and Megan’s name and picture on them were selling fast and we’re the most popular choice at £8 per piece 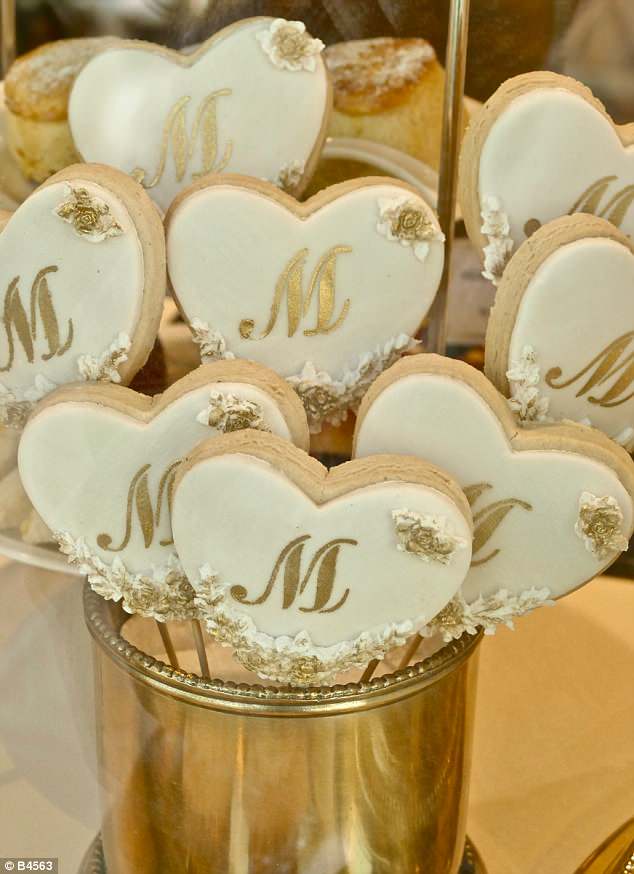 Told about the official Windsor store prices, she said: ‘That’s a lot of money. But I suppose their stuff is bone China while mine is made for sale on the streets at a much lower cost.’

In the Prince Harry pub which opened in 1515 and is close to the registrar office where his father Prince Charles took Camilla as his bride, locals enthusiastically greet visitors throughout the year and particularly when royal functions or state visits mean their numbers increase rapidly.

John Fahy, 57, a British airways engineer based at Heathrow, sat at the bar with his British bulldog Stanley whose neck collar was adorned with a Union Jack.

He said: ‘The wedding is good for the area and good for the country. It gives us all something to celebrate. My parents were Royalists and I suppose I am too.

‘This all the helps the economy and the wedding keep the country in business and brings lots of money in too. There’s so much to like about the whole event.’

Asked if he would be contributing to the roaring trade in Harry and Meghan souvenirs, he said: ‘In a word No. That’s not really for locals.’