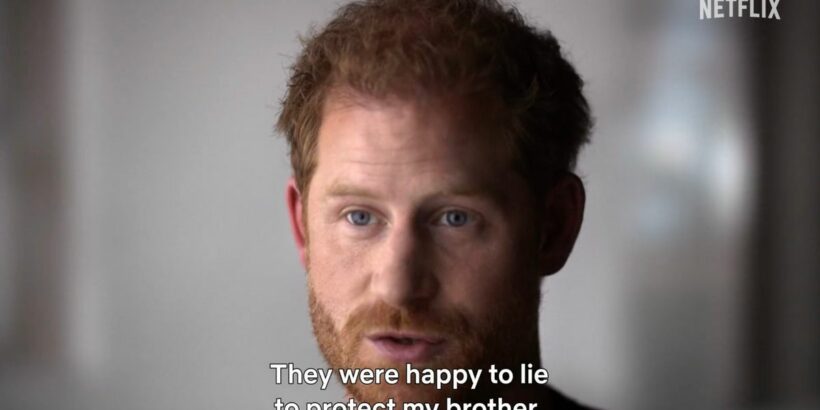 Prince Harry has "pulled out the pin" in the feud with his brother Prince William amid suggestions he has "evidence" to back up claims from his Netflix documentary with wife Meghan.

Prince Harry claimed Palace staff were willing to "lie" to protect his brother, in an explosive trailer for the next part of his tell-all docuseries Harry & Meghan.

The Duke of Sussex shockingly said people were "never willing to tell the truth" to protect him and his wife Meghan Markle.

And according to former BBC correspondent, presenter and royal commentator Peter Hunt, Harry may have evidence to back up his smack talk.

"Harry has pulled out the pin. The royals will have to watch how they respond given the evidence Harry may have at his disposal," Hunt tweeted after the trailer hit.

"Adopt the brace position," Hunt said in a previous tweet about the trailer.

The trailer, revealed on Monday, teased the next three episodes of the six-part docuseries and featured Harry and Meghan dropping fresh claims about their tumultuous time in the royal household.

The trailer starts by showing a clip of Harry and Meghan at their last ever royal engagement, with Harry saying: "I wonder what would have happened to us had we not got out when we did."

Meghan added: "Our security was being pulled. Everyone in the world knew where we were." With Harry declaring: "I said we need to get out of here."

The trailer jumps to Harry filming a video diary on a plane, telling the camera "we are on a freedom flight" before hitting out at "institutional gaslighting".

Later on in the trailer, Harry opens up about their decision to step down as senior royals, saying: "To move to the next chapter, you gotta finish the first chapter."

Meghan added: "It gave us a chance to create that home that we had always wanted."

At the end of the trailer, Harry said: "I was thought this was a fight worth fighting for."

The first three episodes of Harry & Meghan caused quite a stir last week and focused on the early days of their romance, their childhoods and the impact of the press on Harry's life.