New York: Harvey Weinstein has pleaded not guilty to rape and criminal sex act charges in New York in the first cases involving the disgraced producer to be tested in criminal court since scores of accusers emerged last year.

Weinstein quietly answered a series of yes and no questions from the judge asking if he understood his rights at the hearing in Manhattan after a grand jury indicted the former movie mogul last week on charges involving two women.

One alleged victim, who has not been identified publicly, told investigators that Weinstein cornered her in a hotel room and raped her. The other accuser, former actress Lucia Evans, has gone public with her account of Weinstein forcing her to perform oral sex at his office in 2004. 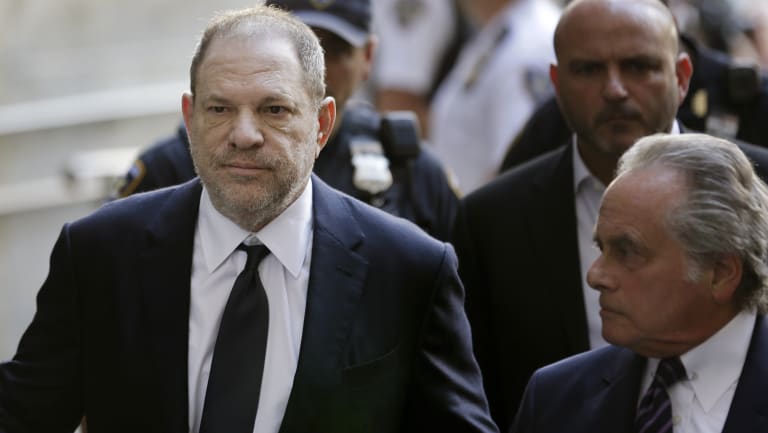 Harvey Weinstein arrives to court with his lawyer Benjamin Brafman.

Dozens more women have accused him of sexual misconduct ranging from harassment to assault.

The 66-year-old Weinstein has denied all allegations of non-consensual sex. His lawyer, Benjamin Brafman, has challenged the credibility of his alleged victims and says his client is confident he is going to clear his name.

Brafman called the rape allegation "absurd," saying that the accuser and Weinstein had a decade-long, consensual sexual relationship that continued after the alleged 2013 attack.

Manhattan District Attorney Cyrus R Vance jnr has said it was predictable that Weinstein's camp would attack the integrity of the women and of the legal system.

Vance, a Democrat, came under public pressure from women's groups to prosecute Weinstein after declining to do so in 2015, when an Italian model went to police to say Weinstein had groped her during a meeting.

Police set up a sting in which the woman recorded herself confronting Weinstein and him apologising for his conduct. But Vance decided there was not enough evidence to bring charges.

The accusations of sexual misconduct, first reported by the New York Times and the New Yorker last year, gave rise to the #MeToo movement, in which hundreds of women have publicly accused powerful men in business, government and entertainment of misconduct.

Once a fixture of elite Manhattan and Los Angeles society, Weinstein has been ostracised since the accusations became public. The Weinstein Co's board fired him, the company filed for bankruptcy in March, and the Academy of Motion Picture Arts and Sciences expelled him.

London's Metropolitan Police and Los Angeles prosecutors have said they are reviewing accusations of sexual assault against him.