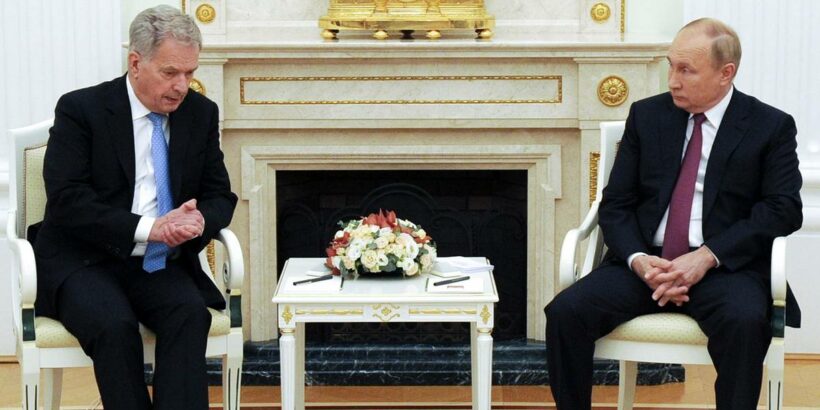 The Finnish president, Sauli Niinisto, has carved out a vital role as interpreter between East and West, and he is not optimistic about the prospects for peace.

As the threat of a new Russian invasion of Ukraine grew, the European head of state with the longest and deepest experience dealing with Vladimir Putin fielded calls and doled out advice to President Emmanuel Macron of France and other world leaders desperate for insight into his difficult neighbour to the east.

“‘What do you think about this, about this; what about this or this?’ That’s where I try to be helpful,” said Sauli Niinisto, president of Finland, as the harsh light gleaming off the snow and frozen bay poured into the presidential residence. “They know that I know Putin,” he added. “And because it goes the other way around, Putin sometimes says, ‘Well, why don’t you tell your Western friends that and that and that?'”

Niinisto, 73, said his role was not merely that of a Nordic runner, shuttling messages between East and West, but of borderland interpreter, explaining to both sides the thinking of the other. The departure from politics of Angela Merkel, who for years as Germany’s chancellor led Europe’s negotiations with Putin, has made Niinisto’s role, while smaller, vital, especially as the drumbeat of war grows louder.

But Niinisto is not optimistic. Before and after his last long conversation with Putin last month, he said, he had noticed a change in the Russian. “His state of mind, the deciding, decisiveness — that is clearly different,” Niinisto said. He believed Putin felt he had to seize on “the momentum he has now.”

He said it was hard to imagine that things would return to the way they had been before. The opposing sides disputed the Minsk agreement that the Russians insisted be honoured. The remaining options boiled down to Russia pressuring Europe and extracting demands from the United States for the foreseeable future or, he said, “warfare.”

Such plain speaking has made Niinisto, in the fifth year of his second six-year term, wildly popular in Finland. He is compared by some to Urho Kekkonen, who took power in 1956 and ruled Finland for 25 years, during the so-called Finlandisation period of the Cold War.

“We love him,” said Juha Eriksson, as he sold reindeer pelts, canned bear meat and smoked salmon sandwiches in a market next to ice shards in the bay. “My generation had Kekkonen, and he was the father of the country. And he is a little something like that. It’s a pity that he must leave office soon.”

Niinisto plays down his near 90 per cent approval rating as consistent with his predecessors and dismisses the hyperbolic talk of his being some kind of Putin whisperer. “It’s an exaggeration that I somehow know more about Putin or his thinking,” he said. He is clearly cautious about upsetting a relationship he has nurtured over a decade, including many meetings, countless phone calls and a game of ice hockey. Asked who was better, he responded diplomatically, “I’ve been playing all my life.”

But he did point to some concrete benefits. After gaining support from Merkel, he said that he asked in 2020 if Putin would let Alexei Navalny, the Russian opposition leader who accuses Russian operatives of poisoning him, to be flown to Germany for medical treatment. Navalny’s office later thanked Niinisto.

“He is a good person to call when you want to understand what is happening in the northeastern corner of Europe and especially if you want to understand the thinking of President Putin,” said Alexander Stubb, a former prime minister and foreign minister, who has accompanied Niinisto in meetings with Putin. “He’s a mastermind in power politics and in finding the right balance.”

That Stubb was so effusive about the president itself said something about Niinisto’s overwhelming popularity, and political dominance, in Finland, as political tensions between the two are widely talked about here.

Niinisto derives his power from a critical national security meeting that he runs and from the constitution, which states that foreign policy is “led by the president of the republic in cooperation with the government,”

“It’s the president — pause — who is leading in cooperation,” Niinisto explained, making it clear who came first.

Finnish officials say that Niinisto sheds his diplomatic modesty in private and is known for his long political memory, cutting style and mission creep. “I have been sometimes criticised for remembering too much my old history as minister of finance,” he said with a smile.

Domestic policy is the territory of the prime minister, currently Sanna Marin, a 36-year-old former cashier and climate change campaigner who raised Niinisto’s ire in January, according to Finnish political observers, when she told Reuters that it was “very unlikely” that Finland would apply for Nato membership while she was in office.

“I still say only that I see no major damages,” he said, with visible restraint. Asked if her statement was constructive, he said “I just repeat, no damages.”

The Nato option mattered in Finland as a strategic tool to manage Putin. In a country with an abundance of sayings about the incorrigible nature of Russians (“A Russian is a Russian even if you fry them in butter”) Niinisto recalled one about Russian soldiers, saying, “The Cossack takes everything, which is loose, which is not fixed.”

Despite recalling that Putin once said the friendly Finnish neighbour would become the “enemy soldier” if it joined Nato, Niinisto, who boasts about Finland’s impressive artillery, frequently asserts Finland’s right to become a member of the alliance. “I have said it to Putin too, very clearly,” he said.

Niinisto has also spoken directly to other leaders he suggested were threats to democracy. In a memorable joint news conference at the White House in 2019, he looked squarely at President Donald Trump and said, “You have a great democracy. Keep it going on.”

“He doesn’t respect institutions,” Niinisto said of Trump in the interview, whether it was the European Union or Nato. And the Finn considered the insurrection at the US Capitol building a worrying sign for American democracy.

But in dealing with Putin, Niinisto tried to give Trump some pointers before a summit in 2018 in Helsinki, “actually behind that wall,” he said pointing across the room. Before a solicitous public performance that was widely considered a disaster for Trump, Niinisto told Trump that Putin “respects the one who is fighting back.”

Niinisto has said he told President Joe Biden something similar before Biden’s call with Putin over Ukraine last month.

Besides the difficulty of dealing with Putin, Biden and Niinisto share another, and tragic, history. In 1995, Niinisto’s first wife died in a car accident, leaving him to raise his two young sons.

“I know his history,” Niinisto said quietly, adding that he might bring it up to the American president, who also lost his wife in a car crash as a young politician, “someday maybe if I had the possibility of having a longer sit with him.”

Niinisto also picked up the pieces. In 2009, then the speaker of Parliament, he married Jenni Haukio, then a 31-year-old director of communications for the National Coalition Party and now a poet. They have a 4-year-old son, and their dogs have become beloved national mascots.

Before the couple met, he was engaged to Tanja Karpela, a former Miss Finland who was a member of Parliament in an opposition party. They broke up in 2004, and Karpela now trains scent detection dogs that track Siberian flying squirrels.

The year of their breakup coincided with the devastating tsunami in Thailand, where he was vacationing with his sons and was nearly swept away. He survived by clinging high up on an electric pole for more than an hour. The traumatic event still seemed to shake the staid president, who lost 100 countrymen that day. “People who were sitting beside you at breakfast,” he said.

That was a natural disaster. Now he hoped his relationship with Putin, and the “small moves” it might create, would help his partners avoid a man-made one in Ukraine.