‘He looks more like a 40-year-old man!’: Worried parents demand answers over new migrant pupil ‘with thin hairline’ who joined class ‘without birth certificate or passport’

Worries parents are demanding answers after seeing a picture of a pupil who ‘could be aged 40,’ in their children’s classroom.

Parents at a school in Coventry have received a letter from the city council after a picture of the student was shared on Facebook.

Dozens of concerned parents have raised concerns online, saying they plan to complain. 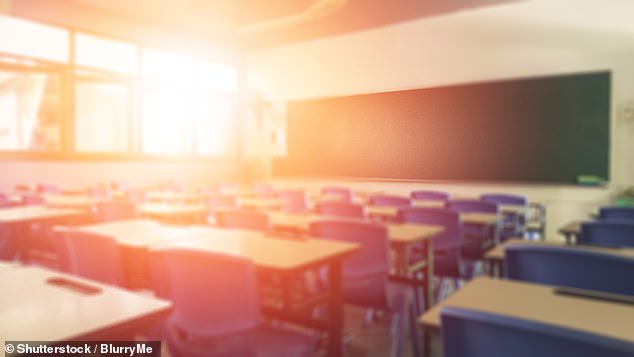 Parents at a secondary school in Coventry are up in arms after a migrant who ‘could be 40,’ was pictured in a classroom, having reportedly arrived in the country with no documentation

One parent told the Metro: ‘Pupils were coming home saying there’s a man in our class, some were even saying they reckoned he could be aged up to 40.

‘He has a thin hair line and apparently he has no birth certificate or passport. He might be the right age, he might not. Either way parents would like some clarity.’

It is believed the pupil travelled to the UK without a birth certificate or passport, before being placed at an unnamed school.

In a letter, Coventry City Council assured parents that it carried out all necessary checks for the new student.

The letter points out that local authorities are obliged to process school applications from migrant children arriving in the England.

It says that concerns over a pupil’s age are usually clarified by asking for a birth certificate or passport.

The letter adds: ‘On some rare occasions if pupils arrive as asylum seekers and alone, i.e. without parents, these may not always be available.’

Declining to comment on individual pupils, the school said it followed Department for Education guidance and followed correct procedures when identifying any children placed on the school roll.

Asylum seekers have posed as children before.

In 2018, an investigation revealed an Iranian migrant posed as a 15-year-old GCSE student – but told classmates he was 25.

The 6ft 1in man, who came to Britain using the name Siavash, spent six weeks as a Year 11 pupil at Stoke High School in Ipswich, Suffolk, but was only taken out of class when pupils became upset and parents threatened a boycott.

An official probe concluded he was almost certainly over 18.