A grieving couple is calling on the NHS to routinely test expectant mothers for a common infection after their newborn baby died five days after contracting it.

Amber Lewis died on January 2 after contracting Group B Streptococcus, or GBS, which lives harmlessly in around 25 per cent of women – but can be fatal if passed onto their babies.

It is the UK’s most common cause of severe bacterial infection in newborn babies and of meningitis in babies under three months. 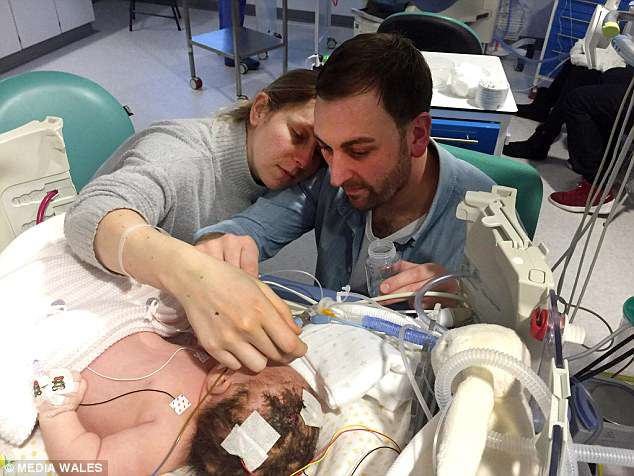 Parents Richard Lewis and Gabby Urrutia, from Llanishen, Cardiff, were left devastated when their newborn daughter, Amber, died after contracting Group B Streptococcus in the womb

Amber’s parents Richard Lewis and Gabby Urrutia, from Llanishen, Cardiff, say they cannot understand why testing for Group B Streptococcus is not available on the Welsh NHS.

Mr Lewis, 35, said: ‘It’s routinely available in so many countries around the world where health services are abysmal compared to ours, including places like Poland, Lithuania and the Czech Republic.

‘I’m amazed and angry that we don’t have it here. We are supposed to be proud of our NHS but I have no faith in it anymore after what’s happened to us.’

Mr Lewis, a security officer, added: ‘What I miss most is holding her. No expectant parent should ever go into hospital and a week later need to start planning their baby’s funeral.

‘In the end we were happy for her as she had suffered enough in the five days she was alive. 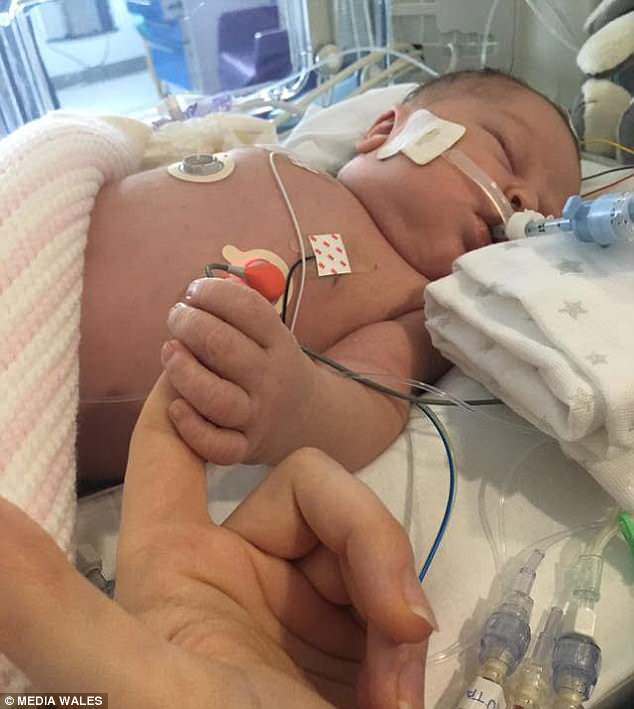 Amber Lewis died on January 2 after contracting Group B Streptococcus, or GBS, which lives harmlessly in around 25 per cent of women – but can be fatal if passed onto their babies

‘If someone had said to me I could have my legs chopped off to get her back, I’d have grabbed the nearest blunt saw.’

Ms Urrutia, a deputy manager at clothing shop Oasis in Cardiff, said she went through the ‘perfect’ pregnancy and was midwifery-led the entire term.

But she began to notice that Amber was not moving when she started going for cervical sweeps which are designed to bring on labour.

‘I couldn’t feel Amber move at all. She moved all the time, all the way through the pregnancy. I thought perhaps she was getting ready to come out.’

The midwife who visited the couple at their home discovered that Ms Urrutia was2cm dilated and told her to travel to the University Hospital of Wales.

The decision was made to induce Ms Urrutia the following day.

‘There was so much meconium [the baby’s first stool] which was a sign that Amber was in distress,’ added Ms Urrutia, 31.

‘Her heartbeat then began to decelerate and there was no rest for either of us between contractions, so they decided to give me an emergency c-section under general anaesthetic.’

Amber was born weighing 11lb 4oz but was described by her father as ‘pale’ and’floppy’ as the infection had taken hold.

In a desperate bid to increase her oxygen levels, doctors performed 11 minutes of chest compressions on Amber before she was taken to intensive care.

Mr Lewis added: ‘Myself and Gabby’s mum were ushered into a room and told that Amber was born not breathing.

‘I just looked blankly at the staff. I was just in total shock. For some reason I still didn’t think the worst as I thought Amber would get stronger.’

Following blood tests, doctors told the couple that Amber had the Group B Strep infection and was severely brain damaged.

‘Seeing my baby for the first time [after the anaesthetic had worn off] gave me a mixture of emotions,’ said Gabby.

‘We both just sat by her and held her hand while she was in the incubator. We couldn’t hold her as she had so many wires around her. It was quite overwhelming.

‘We didn’t know anything about Group B Strep. We were so naive to it. When we heard it was an infection we just thought she could just fight it off. Little did we know how serious it was.

‘We just felt the onus was on us to look it up. We’d been to all the appointments and classes and it had never come up.’

Amber was given medication to regulate her dangerous blood pressure levels, but she began to suffer seizures when doctors attempted to increase her body temperature.

Ms Urrutia added: ‘Whenever we were given good news it was followed up by bad news. It felt like three steps forward and five steps back all the time.’

Five days after she was born, the heartbroken couple made the decision to turn off Amber’s life support machine when doctors said there was nothing more they could do for her.

‘The first time we held her we knew she was going to die,’ said Gabby. ‘You’ve had control over this life inside you for nine months and then you have to let them go. It’s the cruellest thing anyone can go through… I wouldn’t wish it on my worst enemy.’

Mr Lewis said he wished he could ‘turn back time’ so he could find out about Group B Strep and how to get MS Urrutia tested privately for the infection during her pregnancy.

‘Before I die I hope the law is changed so the test is routinely offered in the UK,’ he said. How it’s not common practice I do not know.’

Group B Strep infections are thought to affect one in every 2,000 births when it is passed on to the baby through the amniotic fluid, a clear liquid that surrounds and protects the unborn baby in the womb.

It is also possible for a baby to contract the infection as it passes through the birth canal during labour.

As newborn babies have a poorly-developed immune system, the bacteria can quickly spread through their body, causing serious infections such as meningitis and pneumonia.

One baby a day develops GBS infection in the UK, and one baby a week dies from it.

Last year a 250,000-strong petition was sent to the Department of Health urging all pregnant women in England and Wales to be freely tested for the bacteria on the NHS.

It is claimed offering these tests – which would cost £11 each – could prevent more than 80 per cent of GBS infections in newborn babies born to women carrying the bacteria.

Edward Morris, vice president of clinical quality for the Royal College of Obstetricians and Gynaecologists, said: ‘Group B Streptococcus (GBS) is one of the many bacteria which may be present in our bodies and is the most common cause of severe infection in babies during the first three months of life.

‘It occurs naturally in the digestive system and lower vaginal tract of around a quarter of women at any one time, and does not normally cause any harm to pregnant women or their babies.

At present the test is only available privately in Wales.

If Group B Strep is found, antibiotics are typically given to the pregnant woman.

‘Current RCOG guidance does not recommend universal antenatal screening for GBS which is in line with recommendations made by the UK National Screening Committee.

‘It found that there is no clear evidence to show that routine testing would do more good than harm.’

Richard and Gabby are now arranging a series of fundraising events to raise awareness of the condition, starting with a 10-hour cycle at Pure Gym in Newport this Saturday.

WHAT IS A GROUP STREP B INFECTION?

Group B Streptococcus (GBS) is a bacteria that is carried by up to 40 per cent of adults, usually in the gut, and 25 per cent of women in their vaginas, without typically causing symptoms.

Around one in every 1,000 babies born in the UK develop a GSB infection. The US prevalence is unclear.

Infants can suffer early-onset GBS infections, which are much more common and occur when the infant is up to six days old, if they come into contact with the bacteria in the womb or during birth.

This causes them to develop rapid breathing problems and blood poisoning.

Late-onset GBS infections, which occur between seven days and up to three months, usually cause sepsis and meningitis.

Adults may experience infections of the:

The treatment for sufferers of any age is IV antibiotics.