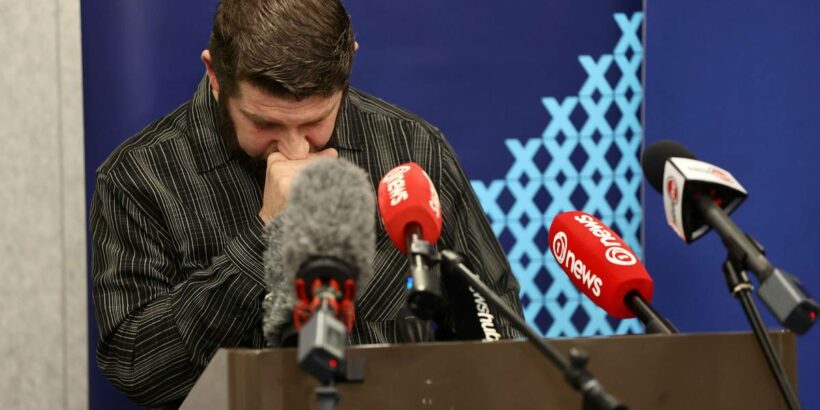 The family of Christchurch teen Connor Whitehead who was killed at a party on Friday have spoken at a press conference at the city’s Justice and Emergency Services Precinct this afternoon.

Parents James Whitehead and Cheryl Merrin were flanked by Connor’s younger sisters and photographs of the youngster.

James Whitehead, speaking on behalf of the family, said they were shocked and heartbroken at the loss of Connor in such a senseless manner.

He was an innocent bystander at a party with friends and should have been safe.

He didn’t know the people who killed him and the family had no connection to anyone involved.

While they had many questions, they wanted to remember Connor as the amazing son, brother, and friend to all, who cared about them deeply.

“He was an amazing kid.”

Connor loved music and planned to study law – and those dreams had been cruelly taken away.

James thanked everyone who had supported the family since Friday night.

He also thanked emergency staff, police officers and police dogs for all they had done.

Detective Senior Sergeant Nicola Reeves, who is leading Operation Stack, the massive police inquiry into the case, said police have made significant progress in their investigation.

She thanked a number of people in the community who have provided assistance and information to the investigation team.

But she said inquiries were ongoing and police were actively seeking one person they believe is involved in Connor’s death.

He was aware he was being sought and she encouraged him to come forward – along with anyone who may know where he is.

She urged them to put themselves in the shoes of Connor’s family and ask how they would feel if it was their loved one who died in similar circumstances.

“Connor had his whole life ahead of him,” Reeves said, which was ended in a “brutal, senseless” incident.

Connor’s father called on the man at large to “do the right thing – hand yourself in”.

Police are searching “wherever it’s going to take to find him” and currently they are focusing on the Canterbury area.

“We know that there are people out there who have been assisting this person,” Reeves said, adding officers have carried out search warrants and made enquiries at a number of addresses.

Officers would continue to work tirelessly, she said. “I am confident that the person we are looking for is alive and is actively evading us.”

The backgrounds of the people involved were part of the ongoing inquiry and officers were currently trying to work out the motive for the attack.

“[Connor] is in no way linked or associated with the people responsible for his death,” Reeves said.

Connor, 16, died from gunshot wounds after attending a 15th birthday party and fireworks in the northern suburb of Casebrook on Friday night.

This morning when his case was called at Christchurch District Court, the alleged gunman did not appear in person.

Judge John Brandts-Giesen was told that he remains in hospital. It’s understood he was injured during his arrest when armed police swarmed a property in Burnside on Sunday.

Duty lawyer David Goldwater made no application for bail but asked for interim name suppression, given that the police investigation is in its early stages. Police prosecutor Stephen Burdes supported the bid, which was granted by Judge Brandts-Giesen.

The man was remanded in custody without plea to the High Court in Christchurch on November 26.

Three people have been charged with being accessories after the fact to Whitehead’s murder – a 46-year-old man and two women, aged 36 and 43 – and appeared at Christchurch District Court yesterday.

They all had applications for bail declined by Judge Tony Couch and were remanded in custody without plea to appear in the High Court in Christchurch on November 26.

Connor Whitehead, a “kind, talented and deeply loyal” 16-year-old, had checked with his father that it would be okay for him to attend the party on Friday night.

After getting the green light, the Burnside High student was enjoying himself with friends.

It’s understood that he was shot outside the party house.

His shocked friends tried to give emergency first aid to Whitehead, who lay bleeding on the front lawn, while 111 was called.

The first call to emergency services came at 11.03pm, with reports of a “firearms incident”.

Armed police officers who were first on the scene also tried to save the boy’s life.

St John arrived around 10 minutes later but Whitehead was pronounced dead at the scene.

A massive police investigation was launched, along with a hunt for the killers.

Several properties in Christchurch and on the outskirts of the city were raided and four people have now been arrested.

Reeves said inquiries are ongoing and anyone with information that may assist should contact police on 105 and quote event number P048523046.