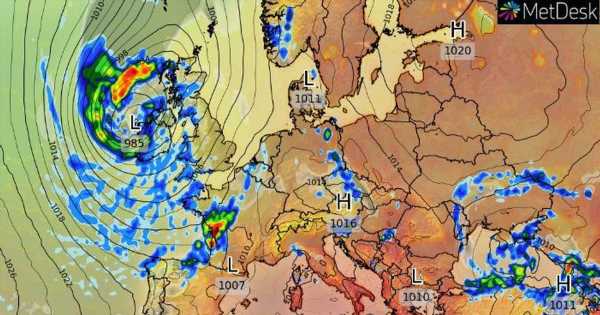 The mercury hit 28C in parts of the country on Friday, including at Glastonbury, but cooler air will be ushered in for the final throes of June before heat levels will be cranked up again, reports the Mirror.

Thermometers will struggle to reach 20C across the next few days, with parts of the country expected to be hit by rainfall, mainly the west, which will be welcomed by withered gardens and dry riverbeds.

“The unsettled pattern is expected to continue to dominate into the start of next week,” said the Met Office’s chief weather forecaster Paul Gundersen, “with the weather to return to near normal for the time of year.”

Fellow Met Office forecaster Alex Deakin expanded on the scenario for the next few days. He said: “If you’re not a fan of the warmth and humidity, then there’s good news, because this cold front is going to sweep away all that and introduce much fresher air.

“That cooler air will be in place through Saturday and lasting to Sunday.

“That low pressure system isn’t moving too far and another thing it’s going to do, with its isobars tightly packed, is bring some fairly gusty conditions.”

Early July should see the sweltering conditions return with a vengeance, with central and eastern England possibly reaching 32C, while it could get even warmer than that and last for several days.

Leon Brown of US-based forecaster The Weather Company said: “More heatwaves imported from the continent to the UK are forecast this summer, each reaching at least 28C – and likely higher – and each lasting several days.”

More heatwaves could arrive in August and even in September, with regular warm fronts being shunted across from Europe.