Bride-to-be, 27, and her nine friends launch compensation claim against easyJet after a cancelled flight ‘ruined’ her hen party to Disneyland Paris 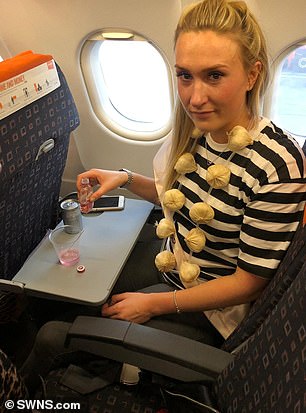 A bride-to-be and nine friends are demanding compensation from easyJet after a cancelled flight ‘ruined’ their hen party.

Charlotte West, 27, was left in tears after a surprise trip to France, including a day in Disneyland Paris, was delayed by 17 hours.

The flight was scheduled to depart from Southend Airport, at 2:45pm on February 22nd but was cancelled after being grounded for an hour-and-a-half due to fog.

She was pictured looking underwhelmed on her flight as the plane sat on the runway.

The delay meant they had to jump on the Eurostar and didn’t make it to France until the following day.

According to law firm Bott and Co., the 10 hens are being denied compensation by the airline.

Charlotte, from King’s Cross, north London, said: ‘The whole trip was a complete surprise. My friends dressed me up in French themed clothing, including a beret and moustache and it was then that I realised we would be going to Paris. I was so excited.’

While stuck on the grounded flight, Charlotte and her friends began to get frustrated with airline staff.

She said: ‘For the most part, we were told we had to remain seated. One of my bridesmaids desperately needed to use the toilet but wasn’t allowed to go initially.

‘As time went on, I started to become frustrated, five of my friends were already in Paris waiting for us.’

By 5pm the group was still in the UK and Charlotte’s group had missed their evening plans including a pre-booked karaoke booth for £200.

To make it to Disneyland Paris the following day, the hen party was to travel to get a Eurostar for 8pm.

Charlotte said: ‘We were kept waiting when we could have been making alternative arrangements. When it all became too much, I began to cry.

‘We disembarked the plane to be met with a huge queue in the airport foyer; people were scrambling to get to the ticket desk. 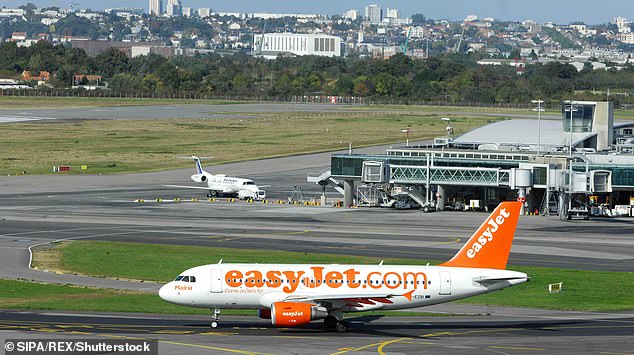 ‘We had to choose between lining up and seeing what our options were or leaving to try and make the Eurostar to Paris.’

The group made it to Disneyland Paris by 7am the next day, but Charlotte’s closest friend dropped out just before they boarded the Eurostar. The bride-to-be described the ordeal as ‘heartbreaking’.

The airline has refunded the group’s Eurostar ticket costs, but have refused to pay out compensation.

A spokeswoman for easyJet claimed the hens had all been paid reasonable costs, saying no more compensation was due.

She said : ‘Like other airlines flying to and from London Southend on 22 February, EasyJet had to divert its previous flight from Paris to Stansted because of fog over Southend.

‘Because the weather didn’t improve unfortunately the flight had to be cancelled. Whilst these circumstances were outside of our control we’d like to apologise for the inconvenience caused.

‘All passengers on the flight were given the option of transferring their flight free of charge or obtaining a refund and we provided hotel accommodation and meals for those requiring it. As the flight was cancelled because of adverse weather no compensation under EU261 is due.

‘However we have refunded Ms West for her flight, her alternative Eurostar transport and all reasonable expenses.

‘The safety and wellbeing of our passengers and crew is always easyJet’s highest priority.’

Charlotte hit out at the airline, saying: ‘I missed my big night out, and in total we lost over £200 for the karaoke room deposit.

‘If we hadn’t made the decision ourselves to get the Eurostar we would have also missed Disney. ‘My hen do was supposed to be a special time but the cancellation really tainted the experience.

‘We could have never expected it to go the way it did and I don’t think EasyJet handled it very well at all.

‘They made no effort to keep us informed throughout the delay and we were all anxious and stressed.

‘I won’t be flying to Paris next time. I would definitely choose going by Eurostar than EasyJet. I will never fly with them ever again.’

She added: ‘I feel like my hen do was ruined, not having the big night out and being tired at Disney. The first night was going to be when people who’d never met before got to know each other but we didn’t get to do that.

‘My bridesmaids had put in so much effort and time organising the trip and EasyJet ruined the start of it all.’ Charlotte has instructed Bott and Co. to pursue easyJet for compensation