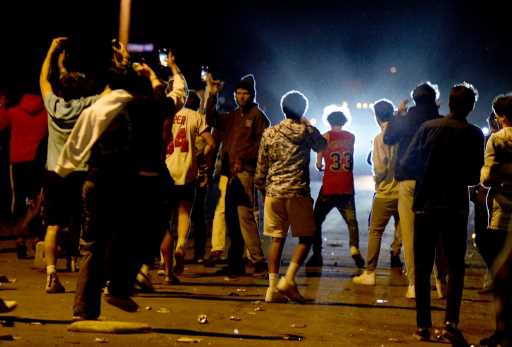 The first person to turn himself in to police after the University Hill riot in March also was the first to resolve his case, as he accepted a plea deal Friday and was sentenced to probation.

Henry Chardack, 21, pleaded guilty Friday in Boulder District Court to a misdemeanor count of criminal mischief and was sentenced to one year of probation as part of the plea deal.

An estimated 500 to 800 college-age people gathered near Pennsylvania Avenue and 10th Street on March 6 in a large outdoor party that became destructive, with people flipping a car and damaging other vehicles and property.

A Boulder armored SWAT vehicle eventually arrived on scene to disperse the crowd, but the truck was damaged and three officers suffered minor injuries.

Chardack was the first to be arrested in the case after turning himself in the Monday after the riot. He told police he was near the car that was flipped, and then went into the car and grabbed a T-shirt.

“I recognize my conduct was wrong,” Chardack said. “I should have walked away.”

Chardack said while he did not help flip the car, he recently by chance ran into the owner of the car, who told him how much the incident impacted her.

“That put a lot of it in perspective,” Chardack told the court.

Boulder Chief Trial Deputy District Attorney Adam Kendall said that while the riot was a “frightening” event for the University Hill community, Chardack quickly “stepping up to the plate and taking responsibility” was the reason he was offered a misdemeanor plea deal.

“He came in, gave a full statement and took responsibility for his actions,” Kendall said.

Chardack’s attorney Lisa Wayne said Chardack was suspended by the school, but was hoping to return at some point to finish his degree.

Boulder District Judge Norma Sierra credited Chardack for taking responsibility as she imposed the stipulated sentence, and also said she hopes Chardack will get the opportunity to finish his time at CU Boulder and become a productive member of the community.

“Hopefully you will be permitted to return,” Sierra said.

Chardack said he was “just grateful for a second chance” and said he hopes others learn from his experience.

“I want to be a lesson for other students,” Chardack said. “There are consequences.”

Nine others were arrested and have pending cases, while there were three outstanding warrants related to the incident.

As of July, CU Boulder had placed 43 students on probation and suspended four students. The university did not find sufficient information in 123 referrals to move forward with the student conduct process.