HENRY DEEDES: A knockout blow in the bruising Brexit bout as the Tories FINALLY win a vote at long last

Ding, ding! Seconds out. Round three. Another day, another Brexit vote and guess what? Eureka! The Government actually managed to win it.

The result of the vote to delay our departure from the EU had never really been in doubt. Even so, when it was announced, Leader of the House Andrea Leadsom saw fit to give Chief Whip Julian Smith a reassuring pat on the forearm.

Yup, it really has been that long since the Government won one. Not that the evening had been without tension. 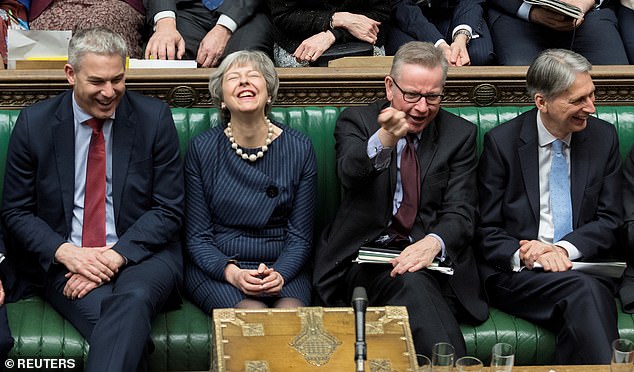 A lighter moment: Mrs May sees the funny side during yesterday’s debate as she sits in the Commons with Steve Barclay, Michael Gove and Philip Hammond

Several amendments which would have given MPs greater control over Brexit threatened to further weaken Theresa May’s authority. Thankfully for her, they were all defeated. Just.

Now, somehow, Mrs May must conjure a way to get MPs to back her deal at the third time of asking. I really don’t fancy her weekend much.

What of the debate itself? Pretty stodgy stew, I’m afraid.

It began in lively fashion with the Speaker selecting an amendment by Sarah Wollaston (Ind, Totnes) calling for a second referendum and discarding another brought by Brexiteer Mark Francois (Con, Rayleigh and Wickford) which ruled out a second public vote. This, despite Mr Francois’ amendment receiving more signatories.

Mr Francois wasn’t happy. His portly visage turned a lighter shade of magenta. Then he was up on his hooves, barracking the chair. ‘Point of orderrrr, Mr Speaker!’

He reminded me of Harry Enfield’s Self-righteous Brothers. ‘Oi, Bercowww! Noooo!’ The Speaker calmly advised him to ‘take the rough with the smooth’.

Mr Francois sat down in a huff, his cheeks puffing in and out like a helium balloon. 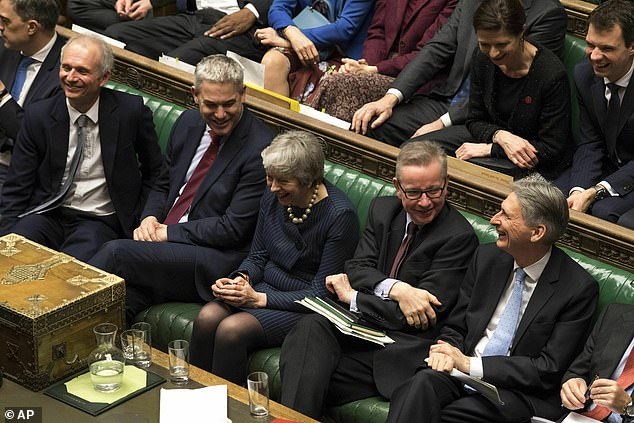 ‘Mrs May must conjure a way to get MPs to back her deal at the third time of asking – I really don’t fancy her weekend much,’ writes Deedes

This latterday Essex Man has been a big noise in the Brexit debate but recent media exposure appears to have gone to his head. He is danger of being cast as the Commons’ clown. Later, during an intervention, he needlessly informed the House that he had missed some of the debate because he had been in the gents.

Way, way too much information. ‘Did you wash your hands?’ wondered Emma Hardy (Lab, Hull West and Hessle).

After that, any cordite which remained in the chamber from the week’s previous explosions swiftly dissipated. Making the opening arguments for the Government was Mrs May’s quasi deputy David Lidington.

Alongside him was a charisma-free zone: Philip Hammond; Jeremy Wright; Damian Hinds. Has there ever been a greyer Cabinet or one more in need of a shake-up?

Lidington is an honourable enough fellow but he’s no Michael Gove. The day before, the Environment Secretary fizzed and sparkled as he opened the debate. Lidington plodded aimlessly, far too generous in accepting interventions. For over an hour, he droned on. What dreary stuff.

Keir Starmer (Lab, Holborn and St Pancras) responded for the Opposition. Labour’s Brexit spokesman ruled out voting for the Wollaston amendment, saying the vote was about seeking to extend Article 50. Also deciding on a second referendum was for another time. That didn’t go down well on the opposing side of the House. 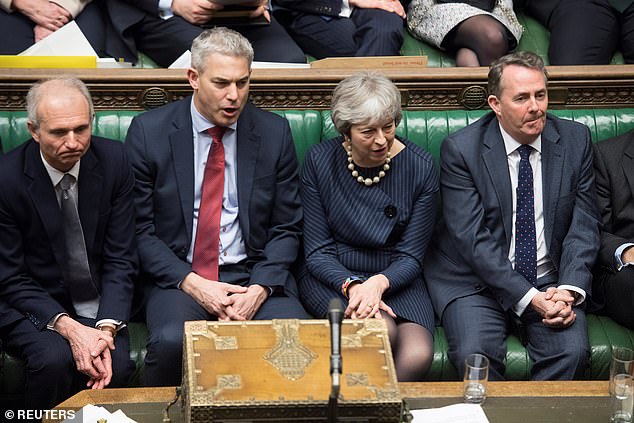 Ian Blackford (SNP, Ross, Skye and Lochaber), tugging on his lapels, accused Labour of being frauds who were helping to perpetuate Brexit.

‘Great rhetoric. No substance,’ sighed Starmer. The former Director of Public Prosecutions scored a bullseye. Brexiteer blowhard Sir John Hayes (Con, South Holland and the Deepings) railed against the ‘global elites’ who were trying to destroy Brexit. A knight of the realm barracking about elites certainly seemed a trifle rich.

Yvette Cooper (Lab, Normanton, Pontefract and Castleford) accused Sir John of being divisive and that his speech was ‘not the right one to have made’. Her irked boss Jeremy Corbyn must be pained that Yvette is now calling the shots in SW1.

Understandably, Mrs May had chosen to sit out the day until she appeared in the late afternoon, just before the result of the first amendment was announced.

She spent most of her time conversing with her two Parliamentary Private Secretaries, Seema Kennedy (Con, South Ribble) and Andrew Bowie (Con, West Aberdeenshire and Kincardine), before scarpering ahead of the result being declared.

Off to rest her ailing throat, no doubt. More to the point, she’s got to return to this bestial arena and do it all over again next week.