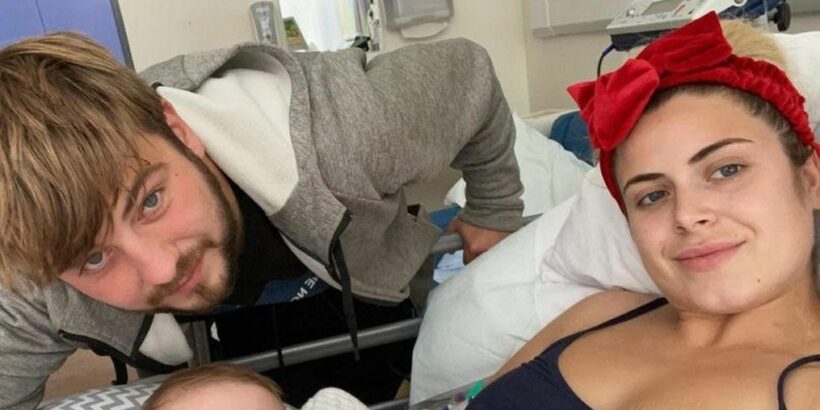 A mum who threw her child to safety from a car crash has had to have five operations since the horrific incident and is "traumatised" after finally waking up..

Ruby Flanagan, 24, was visiting Bidston Moss Retail Park in Wirral on August 16 with her nan to purchase supplies to start weaning her child.

She had been carrying her five-month-old child in a car seat on a zebra crossing when the crash happened which saw her crushed between a blue Volkswagon and silver Mercedes, the Liverpool Echo reports.

With no regard for her own safety Ruby, who works as a nurse, had the presence of mind to throw her baby from harm's way when she realised what was going to happen, her sister-in-law Chelsea Clarke has said. Following the crash Ruby was taken to Aintree Hospital by air ambulance, where one of her legs was amputated and the other placed into a stabilising cage.

Ruby's sister-in-law said that Ruby was "traumatised" when she woke up following the incident.

In the incident, Ruby suffered a cracked spine, broken leg, and shattered pelvis and has had to have five operations.

These include a metal bar being placed in her lower spine for six months.

Sister-in-law Chelsea said: "Words can't describe the damage that has been cause through this, it is heartbreaking.

"Ruby's had five operations up to now. She cracked her spine, fractured her pelvis and broke her leg in a few different places."

Chelsea and her 27-year-old sibling Carly have also set up a GoFundMe page for the family as Ruby will need specialist medical care that could incur private medical bills, as well as several kinds of therapy and prosthetics.

Chelsea said: "Ruby’s home also needs adjustments made to ensure she has the best possible recovery and the smoothest transition back home when she can eventually return.

"I know money doesn't solve everything, but in this situation it really will help as it will give the family the best possible chance.

"Ruby adores her partner and baby and is the kindest person you would ever meet, she would do anything for anyone.

"We're heartbroken after the crash and just want to put her at ease."

Ruby's family said the support since the accident has been 'unreal'

They said: "I know money means nothing right now, but the amount of support and positivity is unreal. We can't thank everyone enough.

"Ruby is such a brave inspiration to us all and is just wanting the best life for her baby Leon."

Ruby worked 'really hard' to train as a nurse and her family spoke of how she would 'do anything for anyone'.

Chelsea added: "The way she threw baby Leon out the way of danger was amazing and heroic.

"It just shows the type of person she is, always putting other people before herself."

Her colleagues on Ward 14 at Arrowe Park Hospital spoke of Ruby's "heart of gold" and the work she did while pregnant on a covid ward in the hospital.

A colleague, who asked not to be named, said: "Ruby has a heart of gold, she gets on with everybody.

"She's an incredible nurse who often went above and beyond for her patients."