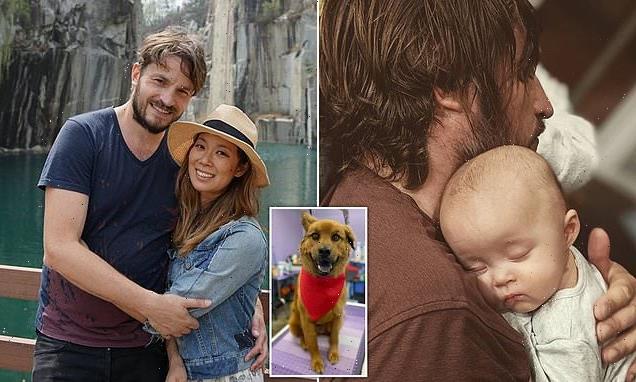 Deaths of Brit Google engineer, wife, baby and dog during California hike are now NOT being treated as murder: Mystery as police say autopsy failed to reveal answers and it will be WEEKS until they get toxicology results

The mysterious deaths of a Google engineer and his family on a hiking trail were not a case of homicide, police say.

The bodies of Jonathan Gerrish, 45, his wife Ellen Chung and their daughter Muji – along with their dog Oski – were discovered by search teams on Tuesday in an area of the Sierra National Forest known as Devil’s Gulch.

Officials were originally investigating whether poisonous algae killed the family who were found dead on a remote hiking trail near Hites Cove, a popular hiking destination, but lifted the hazmat declaration on Wednesday. The bodies of the deceased were airlifted out of the area that afternoon.

Mariposa County Sheriff’s spokeswoman Kristie Mitchell said: ‘Initially, yes, when we come across a family with no apparent cause of death, there’s no smoking gun, there’s no suicide note, there’s nothing like that, we have to consider all options.

‘Now that we’re five days in, no, we’re no longer considering homicide as a cause of death.’

Police had earlier announced that they were treating the mysterious deaths of the British software developer, his wife, their one-year-old toddler and the family dog as a homicide. 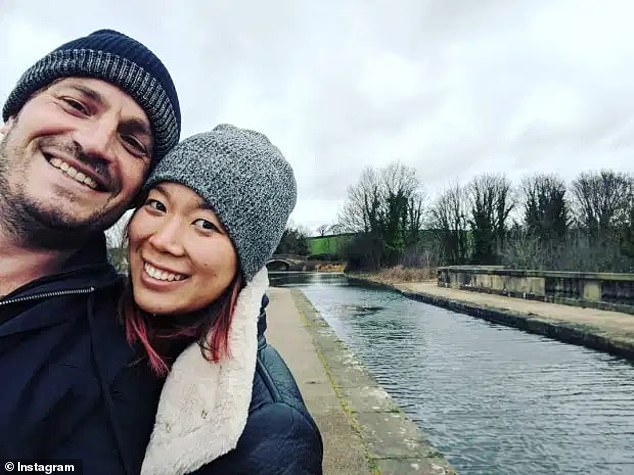 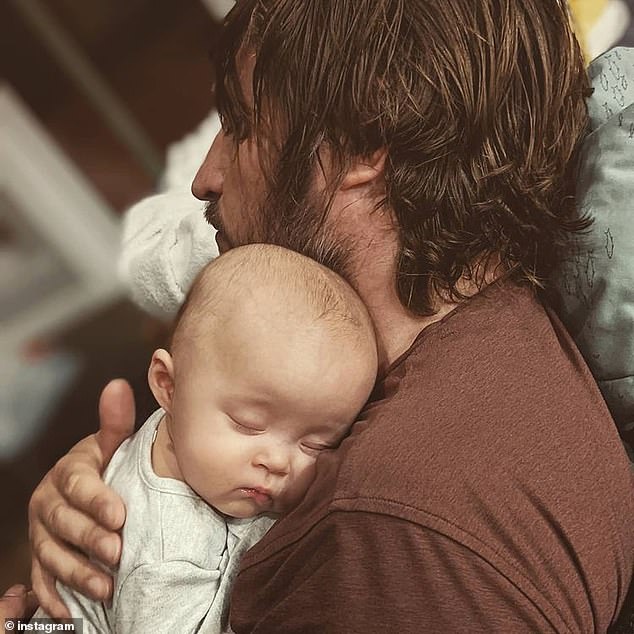 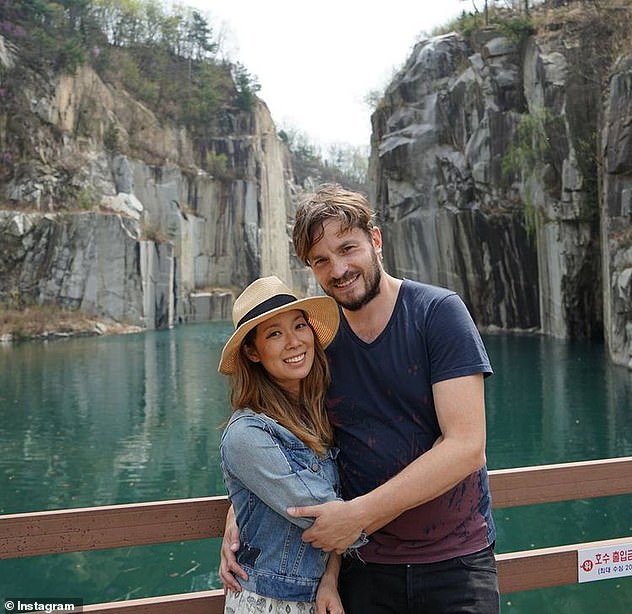 Jonathan Gerrish, his partner Ellen Chung and their one-year-old daughter were found dead along with their dog Oski near an area called Devil’s Gulch in a remote part of Northern California on Tuesday 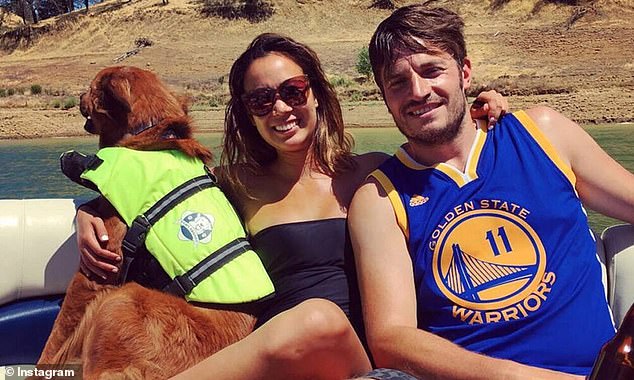 Mariposa County Sheriff Jeremy Briese explained that he had never seen a case like this in 20 years, ‘You have two healthy adults, you have a healthy child and what appears to be a healthy canine all within a general same area’

County Sheriff Jeremy Briese said: ‘I’ve been here for 20 years, and I’ve never seen a death-related case like this.

‘There’s no obvious indicators of how it occurred.’

Briese said there was no obvious cause of death and that he had not dealt with a case like this in his 20 years in the area.

‘You have two healthy adults, you have a healthy child and what appears to be a healthy canine all within a general same area,’ the sheriff explained.

‘So right now, we’re treating the coroner investigation as a homicide until we can establish the cause.’

Officials first began looking into the toxic algal bloom from the Merced river as the cause for what overcame the family, along with possible escaping gas from abandoned gold mines.

But Briese said they could not find any disused shafts in the vicinity.

‘We have not found any old mine shafts near the area,’ he added. ‘There are some mine shafts, but we can’t confirm if that’s the cause yet. 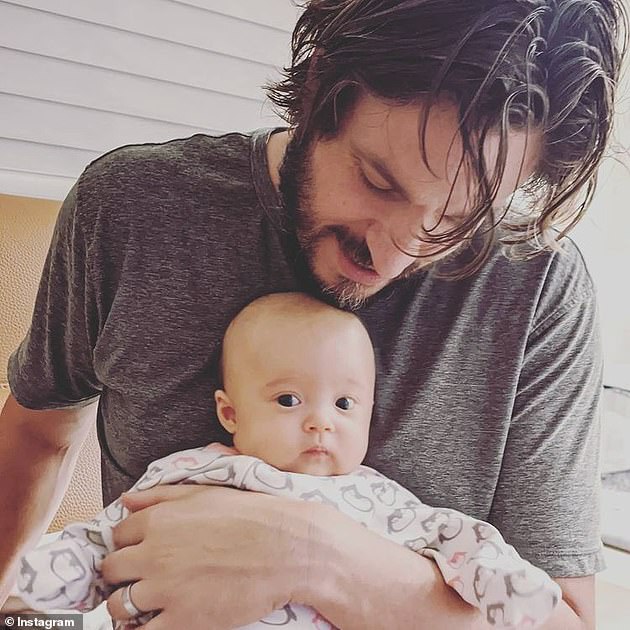 Officials lifted the areas hazmat restriction on Wednesday when they did not find any old gold mine shafts in the vicinity, which they had originally believed could have been emitting toxic gases that killed the family 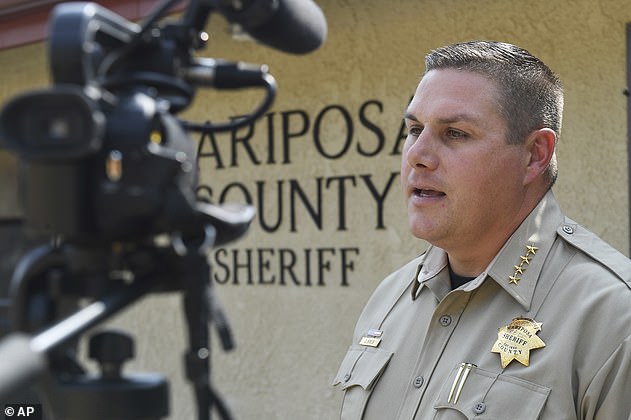 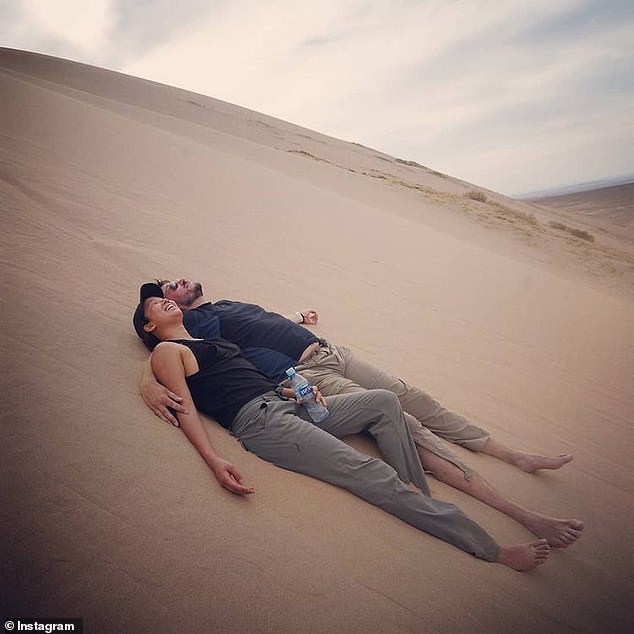 Police are still waiting on the results of post-mortem examinations. Further toxicology reports could take up to six weeks. Autopsies and toxicology tests are planned for Thursday in Stanislaus County.

California State Water Resources Control Board and Mariposa County are now re-testing the river water for cyanobacterial toxins, which can form in algal blooms.

Searchers began looking for the family after they were overdue on a day hike and reported missing on Monday. They were found on the Savage-Lundy hiking trail near Hites Cove, which was once a thriving mining community after gold was discovered in 1861.

On July 13, Sierra National Forest officials posted a warning about ‘high concentrations’ of algae which can produce ‘extremely dangerous toxins that can sicken or kill people and animals’ in the water in the Merced River at Hites Cove.

A listing on the water board’s online map of harmful algal blooms warned: ‘Water Boards recommends a CAUTION due to illness report. Sample results are pending.’

Briese told The Times: ‘There are those different options that are out there – mineshafts and offgassing potential and we’re learning more with our partners in the Forest Service and public health on the toxicity of the algae blooms that they’re posting about.’ 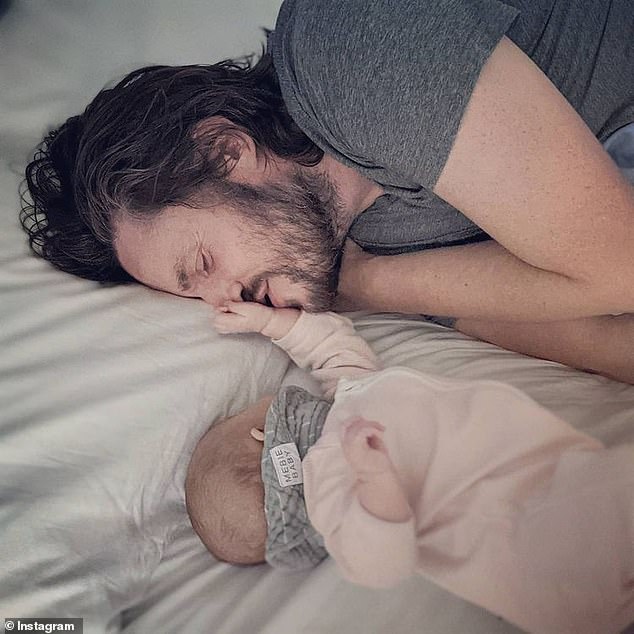 Last month, Sierra National Forest officials posted a warning about ‘high concentrations’ of algae which can produce ‘extremely dangerous toxins that can sicken or kill people and animals’ in the water in the Merced River at Hites Cove

This map shows the remote are in Mariposa County, California, where the bodies were discovered on Tuesday

‘It’s frustrating and we’re not going to rest… it’s devastating to everyone,’ he told the Modesto Bee paper.

The state map listing for the location north of Jerseydale, around where the family was found dead this week, warns people to ‘stay away from algae and scum in the water.’

‘Do NOT let pets go in the water, drink the water, or eat scum on the shore,’ the warning continues. ‘Keep children away from algae. Do not eat shellfish from this waterbody.’

The California Department of Public Health said it did not know of any human deaths from ‘recreational or drinking water exposure to cyanobacterial toxin’ although some animals have been killed by algae.

State waterboard spokesman Blair Robertson said officials hoped to have the results of the water tests by the weekend.

He added: ‘Our staff is conducting testing of the waterways near where the bodies were located and will make the lab results available to the public as soon as we get them.

‘Autopsies were to be conducted earlier today and we await those findings. Our sincerest condolences to the family and friends of the deceased.’

Gerrish was a software developer for Snapchat, had previously worked for Google. He is originally from Lancashire, England and graduated from Newcastle University.

WHAT ARE THE RISKS OF ALGAE BLOOMS?

Cyanobacteria, also known as blue-green algae, are an ancient class of organisms that create the blooms are present nearly everywhere water is found, but thrive in warm, still bodies like lakes and ponds.

It includes species which produce some of the most powerful toxins known to man, and their impact on humans is only partially understood.

The incidence of freshwater harmful algal blooms (FHABs) has surged in recent years, with some scientists attributing the increase to climate change.

What are the health risks?

Algae is capable of producing several different toxins. People may be exposed to these toxins through contact with the skin (e.g. when swimming), through inhalation (e.g. when motor boating or water skiing), or by swallowing contaminated water.

These toxins can cause skin rashes, nausea, vomiting, stomach pains, fever and headaches.

Occasionally, the toxins can cause more serious illness such as liver and brain damage.

Children are at greater risk than adults of developing problems because of their comparative lower body weight.

The California Department of Public Health says it does not know of any human deaths from ‘recreational or drinking water exposure to cyanobacterial toxin’ although some animals have been killed by algae.

How can the health risks be minimised?

Not all blue-green algae blooms and scums are toxic but it is not possible to tell from appearance and so it’s best to assume they are harmful and take the following precautions:

Anyone who has come into contact with water containing algae should shower with fresh water immediately.

Anyone who has come into contact with affected water and has become ill should obtain medical attention.

Speaking from his home in Bamber Bridge, Lancashire, his father Peter, 70, said: ‘The family are just in shock – heartbroken.’

When asked whether he had received any further updates or was in contact with US authorities, the grandfather added: ‘We haven’t heard anything more.’

Chung is originally from Orange, California. She was earning her Masters in Counseling Psychology at the California Institute of Integral Studies after having graduated from University of California, Berkley in 2012. She was a sister of Alpha Chi Omega. Chung practiced yoga and taught Hatha and Prenatal yoga classes, according to her Instagram.

The couple were very active and often spent time outdoors or traveling.

Kristie Mitchell, a spokeswoman for the sheriff’s office has said investigators are still working to determine the cause of their deaths and ‘looking at all possibilities.’

‘It could be a carbon monoxide situation,’ which is why the department had been treating the scene as a hazmat situation she explained.

‘There are several abandoned mines up in the area and in an abundance of caution or recovery team is taking precautions for any poisonous gases, particles in the area,’ Mitchell added. ‘So far, there has been no measurable poisons registered.’

Mitchell also did not rule out possible exposure to toxic algae. She noted that the bodies of the deceased showed no signs of trauma, and no suicide note was found.

‘It is a very bizarre situation,’ she said.

According to a Reuters article published in 2013, two gold and silver miners died in Colorado after being exposed to fatal levels of carbon monoxide, and 19 others fell ill.

Dr Mike Nelson, professor of mining engineering at University of Utah, had cast doubt on the theory that carbon monoxide emissions from an old gold mine were possibly to blame for the deaths from the beginning.

During a phone interview with the DailyMail.com on Wednesday, Nelson explained that gold mines are not known to produce carbon monoxide, and even if the gas were present, it would have gone up into the air.

He also noted that the family were found outdoors and not in an enclosed space where exposure to carbon monoxide could be lethal.

A friend reported the family missing at 11pm on Monday evening after Gerrish and Chung failed to show up for work that day, reported Fox 26 News.

Gerrish and Chung were last heard from early Sunday, when they uploaded a photo of a backpack. Rosanna Heaslett, the family friend, said they hiked on weekends.

The family’s gray Ford Raptor was located near the Sierra National Forest gate early Tuesday. The bodies of the couple, their daughter and pet dog were found 1.5 miles away from the vehicle between 9.30am and 10am.

Briese described the family as ‘very family oriented’ and said that ‘They’re smart, they know hiking and what type of gear you need or don’t need for the amount of time you’re out there, and it appears it was a day hike.’

Gerrish, a native of England, had worked as a software engineer at Google. Chung was from Orange, California, but was of Korean descent 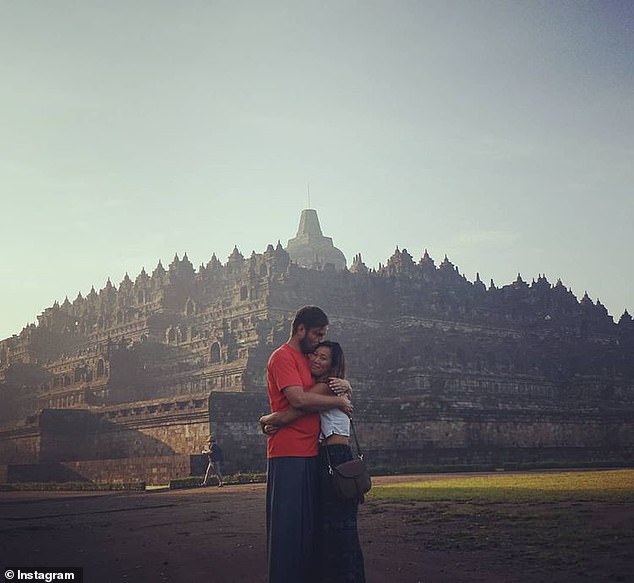 The bodies were located near the Hite Cove trail, known particularly in springtime to have spectacular wildflower displays

‘This is never the outcome we want or the news we want to deliver, my heart breaks for their family. Our Sheriff’s Chaplains and staff are working with their family and will continue to support them during this heartbreaking time,’ said Briese.

The sheriff’s office is investigating the deaths along with the California Department of Justice.

The remote area where the bodies were found had no cellphone service, Mitchell said. It was close to the Hite Cove trail, known particularly in springtime to have spectacular wildflower displays.

The area is normally populated by pines, many of which were destroyed by the 2018 Ferguson Fire.