Delhi: On June 14, for the second year in a row, the far-right Hindu nationalist group Hindu Sena will throw a birthday party for US President Donald Trump.

Last year’s party was small but lavish, with a seven-kilogram birthday cake, countless balloons, and a poster of the President brandishing a gun.

“Donald Trump is the only person who can save mankind,” says Vishnu Gupta, the Hindu Sena’s founder.

Sitting in a cafe at Delhi’s Khan Market, Gupta, 33, appears entirely respectable, and only modestly pious, in his Modi-style kurta – saffron–coloured, the holiest hue – and is rather softly spoken. 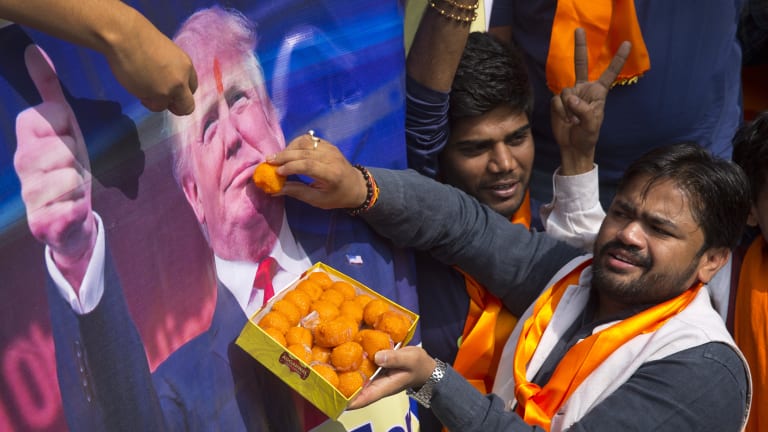 Hindu Sena members offer sweets to a poster of Donald Trump in 2016.

But the views he expounds are no less strident for being expounded with impeccable politeness. He believes India should remove the word “secular” from the preamble to its constitution, that Trump is the “saviour of humanity,” and that Nathuram Godse, the man who killed Gandhi, was more than right to do so.

“We follow the policies of the Bhagavad Gita, not of Gandhi,” Gupta says. “According to the Gita, if the religion is in danger, violence is justified.”

The group’s rap sheet lives up to the rhetoric. The Hindu Sena, or Army of Hindus, has been linked to a number of inter–communal incidents over the past four years. In 2015, members attacked a Kashmiri politician with ink and motor oil while he was visiting Delhi and last year attempted to attack a Communist Party leader after infiltrating his headquarters in the guise of journalists. 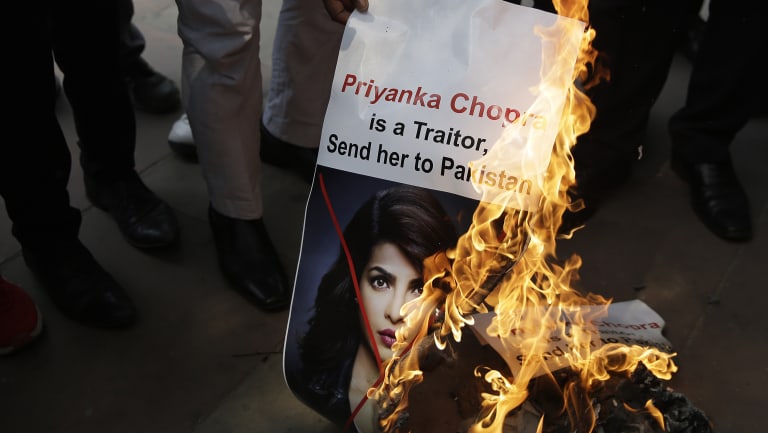 While a number of its actions have been closer to adolescent pranks – the group has a long history of defacing signage on roads named after prominent Muslims – it has also played a leading role in a number of violent protests, including against films and television shows it believes to be anti–Hindu. (Gupta recently spearheaded a social media harassment campaign against actress Priyanka Chopra for appearing in an episode of the American series Quantico that featured a Hindu terrorist group. Both the American ABC network and Chopra apologised.)

“This is what we do,” he says. “The Hindu Sena exists to defend Hindus.”

What they need defending against is simple: Islam and Islamic extremism. These are terms Gupta uses interchangeably. And this is where Trump comes in.

“Donald Trump is the only politician in the world talking seriously about Islam,” he says. “He is threatening Islam very efficiently and keeping Pakistan under control. This is why he deserves our support.” 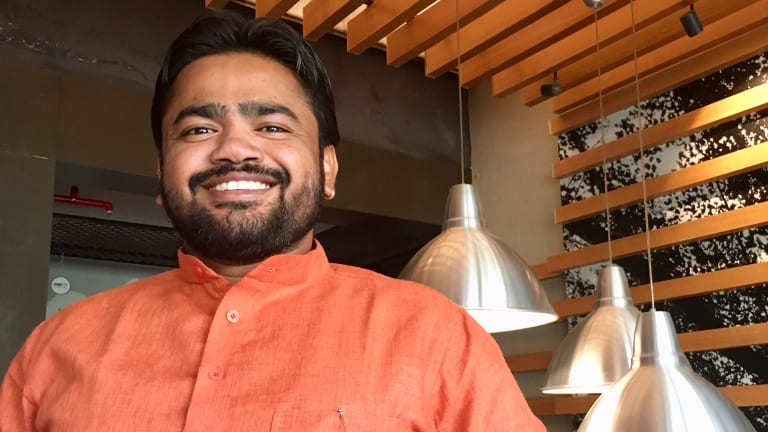 Gupta has no opinion on Trump’s various controversies. “These are personal matters and I don’t know anything about them,” he says when asked about the infamous Access Hollywood tape and the Stormy Daniels affair. “We support him because of his views on Islam.”

He says these views, and Trump’s commitment to them, render the President a more impressive figure than Indian Prime Minister Narendra Modi, who he says has disappointed Hindu nationalist supporters since coming to power in 2014.

“I supported him back then, but it is difficult today. I liked the way he handled the Gujarat situation. I was very impressed by that.”

He is referring to a three–day period of inter–communal violence that left nearly 800 Muslims dead in 2002 and that many believe Modi, then the Chief Minister of Gujarat, initiated and encouraged. (He was cleared of complicity in 2012.) 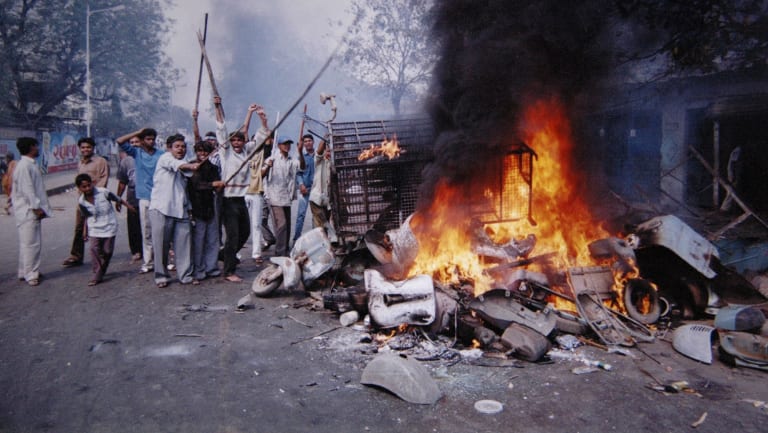 A mob sets fire to vehicles and other goods in Ahmadabad, India in 2002. Sectarian violence erupted as retaliation after 59 Hindus were killed when a train car burst into flames in Godhra.

“But he has not been a strong Hindu leader since becoming Prime Minister,” Gupta continues. “He has been weak on Pakistan, weak on beef exports – which he could end tomorrow if he wanted to –and weak on the matter of the Ram temple.” (In 2009, Modi’s party, the BJP, vowed to construct a temple to Rama at the Hindu god’s supposed birthplace, which was formerly the site of a Mughal–era mosque that was destroyed by Hindu nationalists in 1992. There has been little movement on the project since.)

“He has also addressed Muslim groups and honoured their prophet Muhammad,” he says. “All this is very disappointing.”

Indeed, it’s almost enough to make a man consider running for office himself, he says. “If Modi doesn’t step up and do the things he said he was going to do, we would seriously consider it. We are already considering it.”

The Hindu Sena is one of a number of right–wing Hindu nationalist groups to have grown in prominence and boldness over the course of Mr Modi’s time in office.

Such groups include the Sanatan Sanstha, the Bajrang Dal, and the Hindu Yuva Vahini. Most were founded prior to Modi’s election. 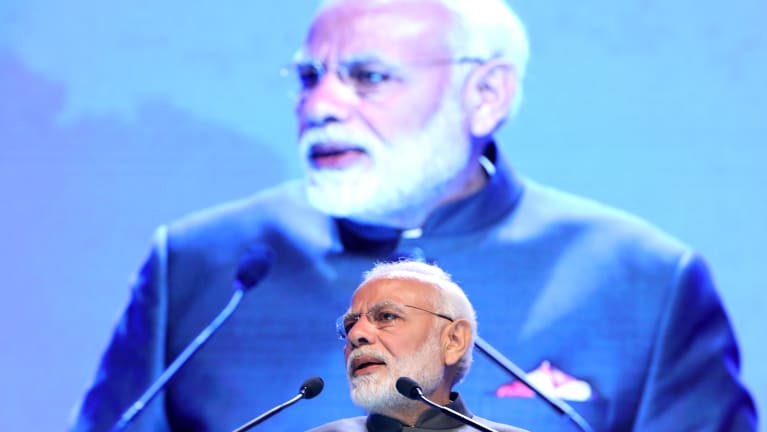 But University of Delhi Professor Sanjay Srivastava, who has studied the impact of Modi’s “strongman” image on Indian society, says such groups have become more active and vociferous under the current administration – not unlike white supremacist groups in the US under Trump.

“They have been very significantly emboldened by his rhetoric and actions,” Srivastava says. “Modi’s projection of masculinity is deeply appealing to them and appears to give them licence.”

[Trump] speaks his mind and knows exactly what the place of women should be. He’s very much admired in India.

He says  Trump’s own style, as well as those of Russian leader Vladimir Putin and Turkish President Recep Tayyip Erdoğan, appeals to India’s right–wing groups for many of the reasons Modi’s once did.

“Donald Trump stands up to foreigners who threaten American culture. Mexicans as well as Muslims,” he says. “He speaks his mind and knows exactly what the place of women should be. He’s very much admired in India.”

The results of all this speak for themselves. According to The Wire, a news website published by the Foundation for Independent Journalism,

Shruti Kapoor is the founder of Sayfty, a Delhi–based group that aims to educate and empower young women against gender violence.

“We have certainly seen an increase in the number of women and girls talking about these issues, but it remains challenging to get them to come along and take part in our self–defence workshops,” she says. “There’s still a mindset among many women and girls that their brothers or husbands need to defend them.”

“Men also need to stop thinking of women as second–class citizens,” she says. “We have leaders sitting in positions of power today who make callous statements like ‘boys will be boys’ and others claiming that if they’re elected they’ll change the rape laws. Narendra Modi’s the prime minister. Millions of people—in fact, in India's case, more than a billion people—look up to him. For him to emphasise his masculine virtues reinforces the patriarchal society we live in. It’s toxic masculinity.”

For his part, Gupta believes that such virtues are an integral part of “Hidutva", or “Hinduness" the dominant ideology among nationalists like himself.

“Every Hindu man needs to be like Shivaji [an Indian warrior king who fought the Moghuls] and lead his woman and the Hindus to greatness,” he says.

Indeed, the Hindu Sena runs “self–defence” classes of its own. Many Indian far–right organisations do, though what they really resemble is military drills.

In February, the leader of the Rashtriya Swayamsevak Sangh, which has close ties to Modi and the BJP, raised eyebrows when he claimed that the organisation’s “cadres” could mobilise faster than the Indian military should it ever become necessary. A former RSS member himself (he says he left when the organisation become too moderate), Gupta says the Hindu Sena is also more than ready to fight. For a moment, he almost channels the birthday boy.

“If the Muslims want extremism,” he says, “we can give them extremism".