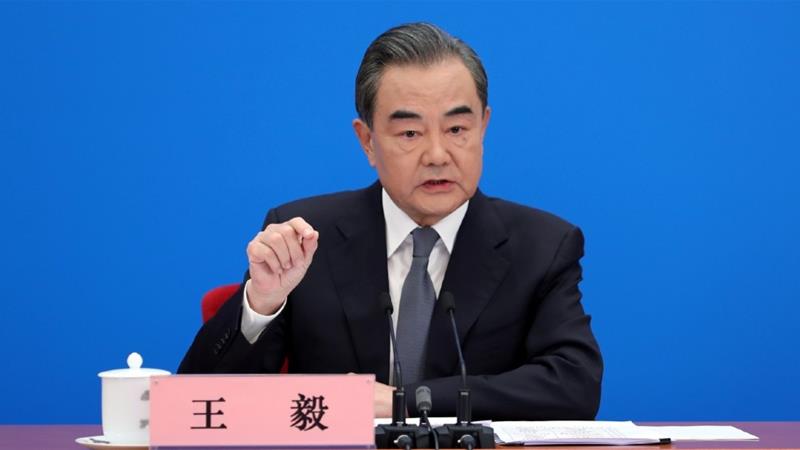 China’s top diplomat has said a controversial security law proposed by Beijing for Hong Kong should be imposed “without the slightest delay”.

The bill, which was submitted on Friday’s opening day of China’s national legislative session, would allow the government to directly impose national security laws on the semi-autonomous financial hub.

Critics say the planned changes – which target secessionist and subversive activity, as well as foreign interference – threaten Hong Kong’s political and legal autonomy and go against the “one country, two systems” framework that promises the city freedoms not found in mainland China.

Speaking at a news conference on Sunday, State Councillor Wang Yi, who is also China’s foreign minister, tried to ease concerns that the legislation would erode the freedoms and rights of the people in Hong Kong, as well as harm foreign investors.

Wang said, however, the law was “imperative” after anti-government protests in Hong Kong last year “seriously endangered China’s national security”, describing the demonstrators as “radical localists” who do not express the opinions of the majority of the people in Hong Kong.

The city was rocked by months of massive, often-violent demonstrations in 2019 amid growing anger over a now-shelved bill to extradite criminal suspects for trial in mainland China.

Thousands of people returned to the streets of Hong Kong on Sunday to protest against the new proposed security law, marking the largest demonstration since the coronavirus was first detected in the city in January.

Local media reported that dozens of people were arrested as police fired tear gas to disperse the crowd.

An international backlash intensified on Saturday as nearly 200 political figures from around the world said in a statement the proposed laws were a “comprehensive assault on the city’s autonomy, rule of law and fundamental freedoms”.

Wang on Sunday reiterated that anything to do with Hong Kong was an internal matter and warned other countries against meddling in its affairs.

In separate comments addressing the growing tensions between the United States and China, Wang said the world’s two largest economies stood to gain from cooperation and would lose from confrontation, adding both sides must find a way for peaceful coexistence.

Ties between Beijing and Washington have deteriorated since the outbreak of the new coronavirus, with the administrations of President Donald Trump and President Xi Jinping repeatedly trading barbs over issues related to the pandemic.

They have also clashed over Hong Kong, human rights, trade and US support for Chinese-claimed Taiwan.

Wang said Washington and Beijing need to start coordinating macro policies for their respective economies as well as the world economy.

China remains prepared to work with the US in the spirit of cooperation and mutual respect, he told reporters, when asked if the two countries’ relations would further worsen.

“China has always advocated that, as the world’s largest developing country and the largest developed country, both of us bear a major responsibility for world peace and development,” he said.