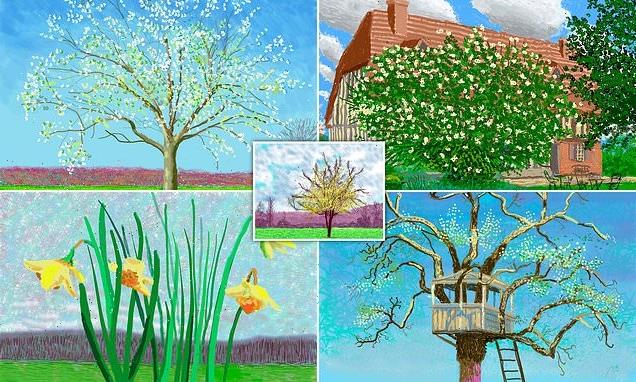 Hockneys that spring from the screen: Drawn on an iPad during the Covid lockdown, the artist’s latest masterpieces light up London, writes ROBERT HARDMAN

While others were hunkering down at the start of this pandemic, stockpiling loo roll and binge-watching hours of TV rubbish, our most successful living artist had other ideas.

In all weathers, at all hours — at the age of 82 — David Hockney was out in his garden capturing the micro-mayhem of spring breaking out across four acres of Normandy countryside. The result is 116 ‘paintings’, composed entirely on an iPad during 95 days of lockdown.

And later this month, the public will be able to immerse themselves in Hockney’s latest embodiment of his unofficial motto: ‘Love life’, at London’s Royal Academy of Arts.

The series is called ‘The Arrival Of Spring, Normandy, 2020’.

This is just as well, since it is probably the closest many of us will get to the land of Camembert and Calvados this summer (let alone the rest of France, unless it finds itself on the travel green list). 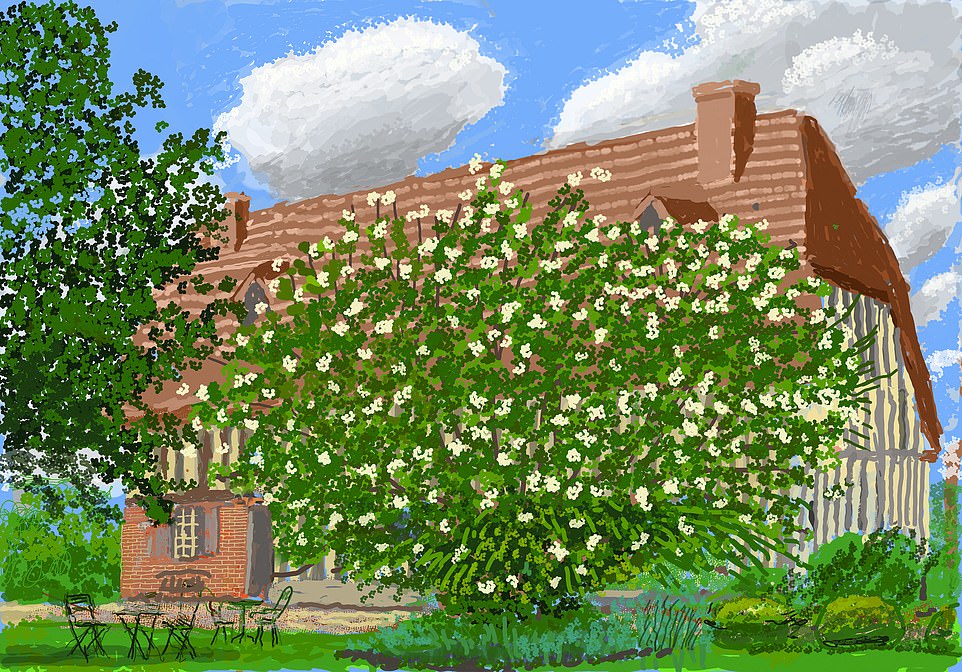 Hockney’s house, No.316, is a half-timbered Norman farmhouse which looks as if it might date back to the Conqueror

There is something uplifting about this workaholic Yorkshireman’s portrayal of things bursting in to life in the grounds of Chateau Hockney.

It is, in fact, a half-timbered Norman farmhouse which looks as if it might date back to the Conqueror. Neither humans nor animals feature in the studies.

Before coronavirus brought the world to a halt, Hockney (now 83) and his assistant Jean-Pierre had been looking for a place to rent in Normandy until he was advised that he might not be able to smoke inside a rented property. 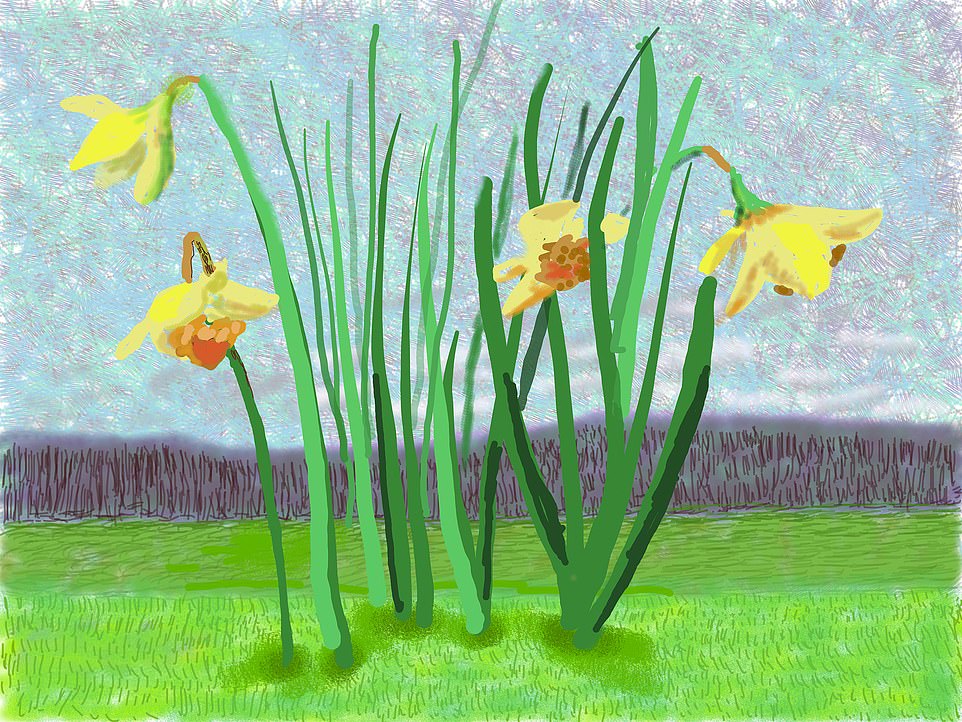 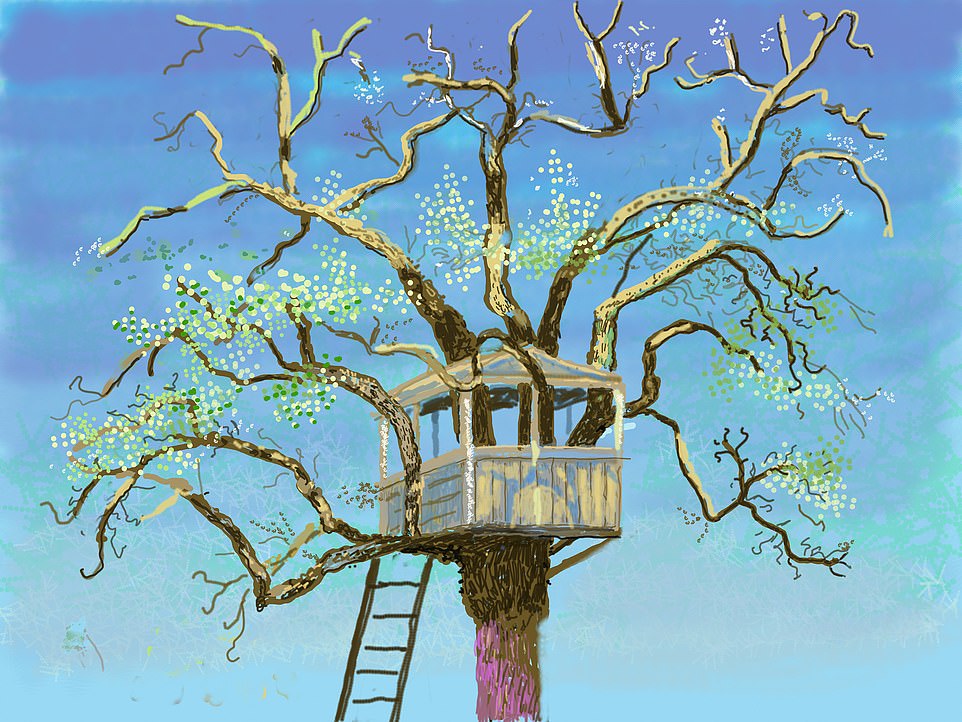 Painting No.125 by David Hockney marks the first break-out of blossom from a pear tree with a treehouse featured (above)

As one of the tobacco industry’s greatest enthusiasts, Hockney was not having that. So he decided to buy this place instead (having set a world record for a living artist when his 1972 Portrait Of An Artist fetched £70 million at auction, Hockney is not without means).

He calls it his ‘Seven Dwarfs house’ and has spent what he has described as a thoroughly civilised lockdown there, pottering around with his iPad, easel and dog Ruby.

Hockney is famous for swapping the grimy monochrome of post-war Bradford for the sunshine and colour of 1960s California. But, having decided that he wanted to capture the full span of spring, he opted to base himself in Europe.

As he points out, the seasonal changes are so much more pronounced here than in California, where it simply goes from warm to hot.

So we see one of his first subjects, a cherry tree, standing leafless against a February sky. But soon life starts to sprout. One ‘painting’ offers an ant’s-eye view of some imperious daffodils. Another marks the first break-out of blossom from a pear tree with a treehouse. 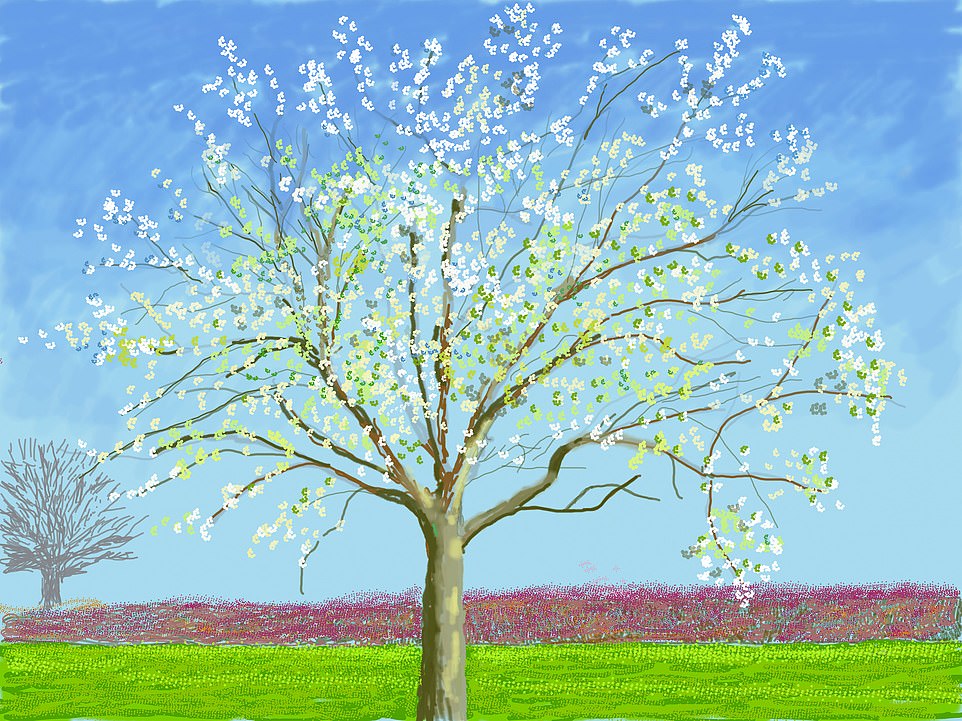 The ‘paintings’ are arranged in a rough chronological order and one of his first subjects, No.133, shows a cherry tree standing leafless against a February sky

Purists will quibble that this is not real ‘painting’ but, no doubt, Leonardo da Vinci might have said the same about acrylic. Hockney has always acknowledged that this is a different medium.

But he says that the joy of the iPad is the ability to work extremely fast, without all the clutter of the conventional artist. There’s no need to wait for each layer to dry.

In the book which accompanies this show — introduced by William Boyd — Hockney also says that he had never intended to paint many of the nocturnal scenes.

Then, he says: ‘I just got up to pee, saw the moon and thought, “I’ll just draw this now”. And because it’s an iPad, you can just draw as you are.’

He has even worked with a mathematician and software specialists to fine-tune the medium, not to mention tiny variations in every shade of green and blue.

Some of the most exuberant trees and hedges are, on closer inspection, thousands of dots. All the works have been printed on to paper. With no frames and no names (every work is, simply, a number), the overall effect is to give a raw vitality to the exhibition.

The ‘paintings’ are arranged in a rough chronological order. Towards the end, we see summer breaking out and verdant branches set against a field of corn. It could almost be a nod to a treescape by another artist who escaped to the warm French countryside, Vincent van Gogh. 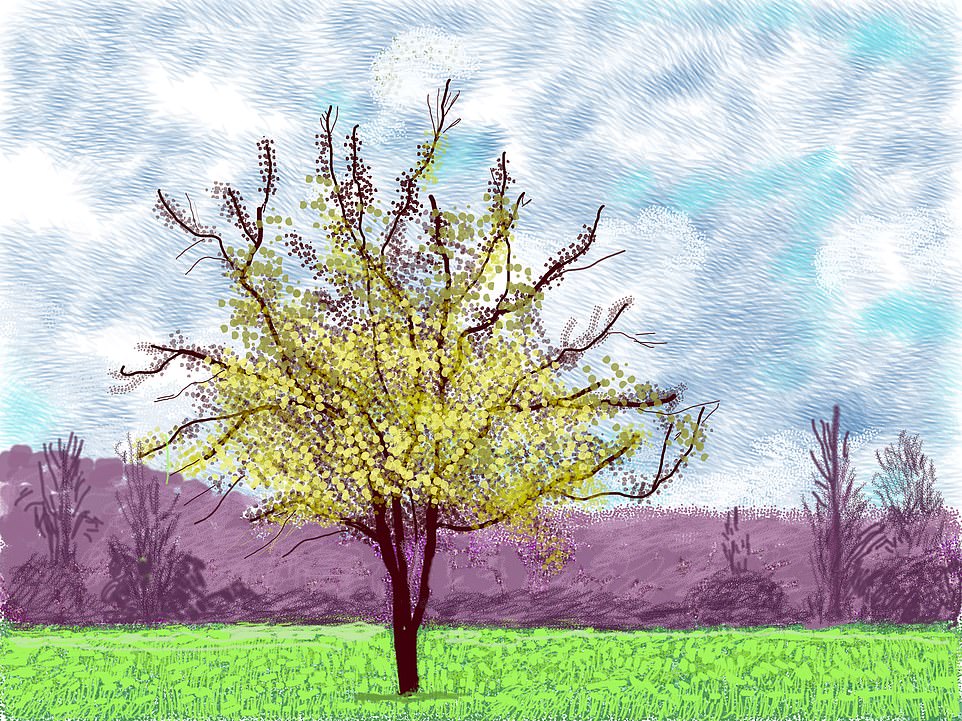 No.88 of the artist’s work which features some of the most exuberant trees and hedges are, on closer inspection, thousands of dots

Here, too, are water lilies, inviting comparisons with Claude Monet, who spent years painting his lily ponds at nearby Giverny.

How long Hockney’s neighbours will put up with him is another matter. This week he said that the land of Monet, Cezanne and Matisse is no longer capable of producing a decent work of art. ‘I’m teaching the French how to paint Normandy,’ he told the Guardian. ‘They gave up painting, didn’t they?’ You can take the lad out of Yorkshire…