The roads most likely to become gridlocked this weekend have been revealed – as 3.8million extra people take to the roads for holidays.

More than nine million people in total are expected to take to the roads on leisure trips between Friday and Sunday as the school holidays begin, the RAC said.

Transport data firm Inrix warned the worst hit routes could be the M5 heading south between Gloucester and Devon, and westbound journeys on the A303 between the M3 in Hampshire and A37 in Somerset. 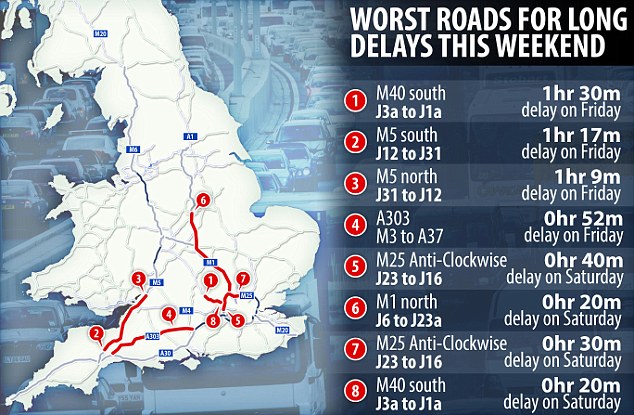 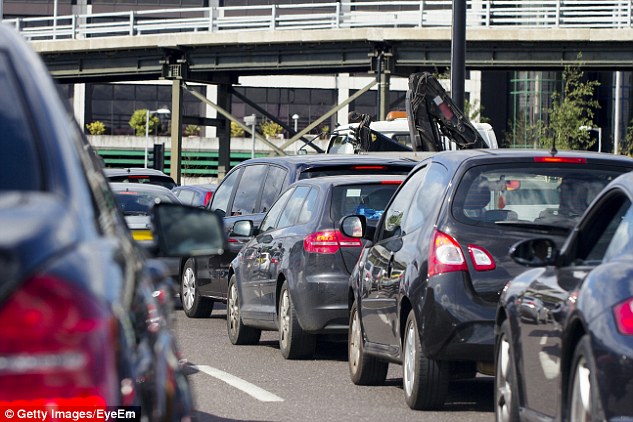 A single breakdown or collision could easily extend delays, and the climbing temperatures this weekend could see a rise in the number of people taking spontaneous domestic breaks.

RAC traffic spokesman Rod Dennis said: ‘This weekend tends to be one of the busiest on the roads for leisure journeys, after Easter and Christmas.

‘On some popular routes this may well mean gridlock, especially in the second half of Friday. As a result, it will almost certainly feel like a frantic Friday for some.’

An estimated 34million leisure journeys by car will take place over the next fortnight. Some schools will break up this week but others finish next week.

Drivers are advised to leave early in the morning or in the evening to avoid the busier middle of the day.

Inrix data scientist, Joshua Kidd, said: ‘The shortest routes to popular holiday destinations may not be the quickest. Drivers should ensure they check live traffic reports before setting off and consider alternative routes.’

To add to the increased volume of cars, roadworks are set to test the patience of drivers yet further.

The Highways Agency website lists 414 warnings of roadworks that will cause a delay of more than 30 minutes over the weekend. 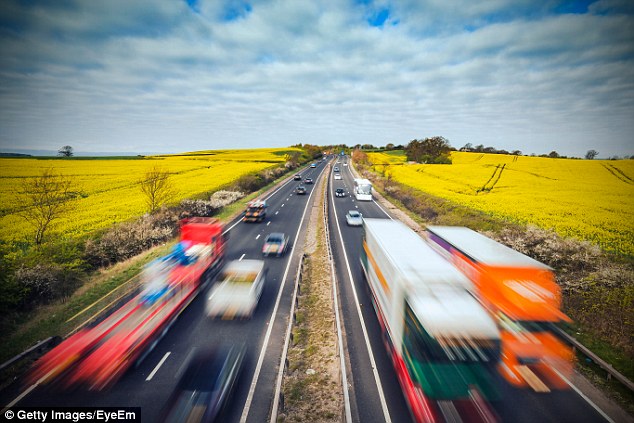 Getaway traffic will peak on Friday as 3.8 million motorists taking holidays will take to the roads alongside regular commuters

Many are for the same road but have warnings at different times in the day and lane closures spread across the UK are likely to cause huge tailbacks.

Ten weeks of diversions driving thousands of cars to an already-congested A50 roundabout in Uttoxeter, Derbsyhire, started this week.

And a £3million development of one of South Devon’s busiest holiday and commuter routes – the A3022 Brixham Road at Paignton – will bring chaos.

Several longer stretches of roadworks are being confined to overnight work, such as on the M62 in Manchester.

The travel chaos is set to be exacerbated by freak weather, as drivers and rail passengers will have to deal with flash flooding and extreme heat.

A weather warning telling of a ‘chance of delays and some cancellations to train, bus and Tube services, particularly during the evening rush hour’, has been issued.

There are concerns that spray and sudden flooding could lead to difficult driving conditions with the possibility of road closures, with motorists already facing lengthy delays compared with a normal Friday.

A level two heat alert has been issued for Friday and Saturday in most of England with forecasters warning social and healthcare services of a 60 per cent probability of heatwave conditions within that period.

What are the RAC’s tips on avoiding (or coping with) traffic jams?

1) Think carefully about when you’re travelling: Most traffic queues are caused by too many cars on the same roads at the same time. If you can travel outside the peak times – think early in the morning or later in the evening – you can easily miss them.

2) Make sure your car, and anything you are towing, are up to the job:Many summer breakdowns are avoidable – punctures for instance can be caused by a tyre that is in poor condition or just not inflated properly. And ageing batteries can struggle in lots of stop-start traffic – consider replacing it if you have any concerns. And check your air conditioning is cooling properly – if it’s not, it might need re-gassing, an easy job for a good garage.