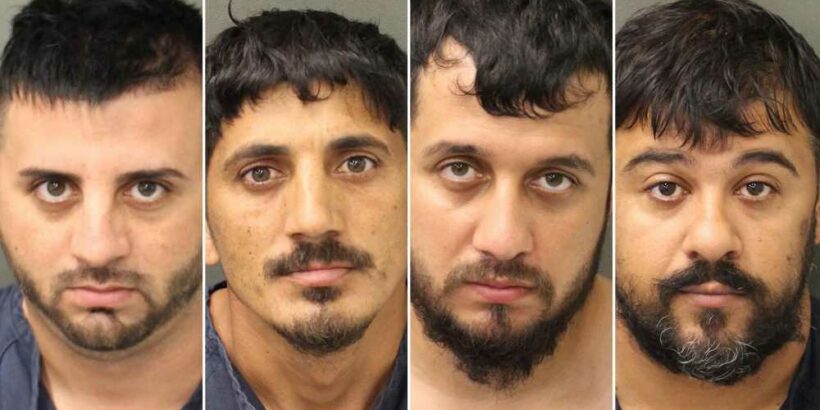 Six “low-tech” thieves snagged $740,000 worth of donations out of church mailboxes – then used the dough for cars, clothes and to wire cash back to their native Romania, Florida police said.

Four of the sacrilegious thieves were arrested Wednesday but two of the men are still on the loose, the Florida Department of Law Enforcement announced.

“This low-tech yet well-organized effort to steal hundreds of thousands of dollars’ worth of mailed-in charitable donations — at a time when donations may have been most needed — has been stopped,” Department Commissioner Rick Swearingen said in a statement.

The men took more than 1,500 checks from 636 churches – 355 in the state alone, cops said. The six operated out of Orlando but traveled throughout the state and elsewhere, sometimes hitting as many as 85 churches in a day, according to a police news release.

Some churches were hit multiple times, the release said.

They used aliases to deposit the donation checks into bank accounts, then withdrew the money at ATMs before the banks caught on, cops said. They allegedly used the money for themselves, but also sent “high-value wire transfers” back home.

“Churches depend on donations from generous members of the community to operate and serve those in need,” state Attorney General Ashley Moody said in a statement.

“It is despicable that this crime ring would exploit the selfless acts of kindness displayed through these donations for selfish greed.”

They are all facing charges including conspiracy to commit racketeering, grand theft and money laundering.

The investigation was sparked in December when Cape Coral Police Department found 24 churches in Lee County alone hit by the scam, and a probe into the thefts expanded beyond the local jurisdiction with multiple law enforcement agencies.