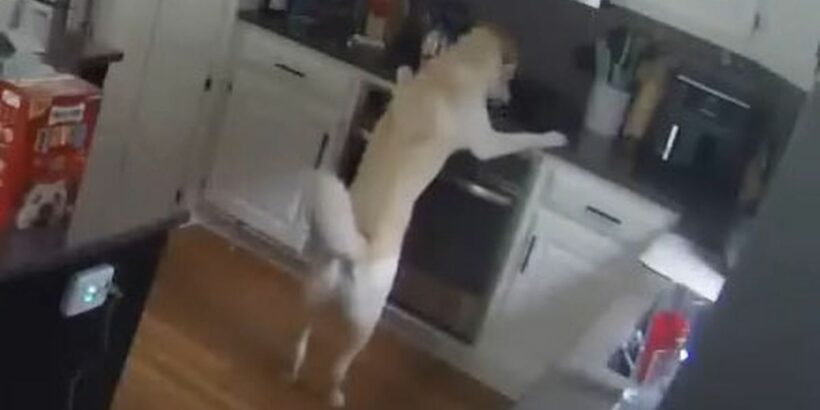 A dog caused severe damage to its owners' home after accidentally turning the stove on and starting a fire while sniffing around the hob at an old greasy pan.

Video of the accident was shared by the Southern Platte Fire Protection District, from Parkville, in the US state of Missouri, to warn owners of the risks unattended dogs can cause.

The dog is seen sniffing at a pan of grease left over the hob while leaning over the cooker's knobs, accidentally turning the stove on.

It can then be seen jumping off the hob and moving around the kitchen as the pan heats up and smoke starts spreading upwards.

As the dog leaves the kitchen, the pan can be seen bursting into flames as the grease ignited because of the heat.

Flames can then be seen spreading through the rest of the room.

Additional video from the internal security camera shows smoke slowly building up around the dining room before the stove lights up in a flash.

The dog's owners were reportedly not at home at the time of the fire.

Firefighters in Parkville, Missouri intervened to tackle the blaze and rescue two dogs left inside the home after neighbours started spotting smoke coming out of the property.

To stay up to date with all the latest news, make sure you sign up for one of our free newsletters here .

The Kansas City Fire Department said there were no injuries but that the home was severely damaged.

Division Chief Chris Denney said: "New appliances have are being seen with touch controls that activate by the simple touch of a finger.

"An animal's paw can also activate these types of controls.

"Please use built-in safeties if available on appliances when not in use and accessible by children and/or animals."

A report from the National Fire Protection Association found cooking was the main cause of home fires (48 percent) and fire-related home injuries (45 percent) between 2012 and 2016.

The activity was also listed as the second most common cause of home fire deaths (21 percent).