Hong Kong’s legislature approved a contentious bill on Thursday that makes it illegal to insult the Chinese national anthem.

The legislation was approved after pro-democracy opposition lawmakers tried to disrupt the vote by staging a dirty protest, throwing a pot of foul smelling liquid onto the floor of the chamber.

The bill was passed with 41 lawmakers voting for it and just one voting against. Most of the pro-democracy lawmakers boycotted the vote out of protest.

The pro-democracy camp sees the anthem bill as an infringement of freedom of expression and the greater rights that residents of the semi-autonomous city have compared to mainland China.

The pro-Beijing majority said the law was necessary for Hong Kong citizens to show appropriate respect for the anthem.

Those found guilty of intentionally abusing the ‘March of the Volunteers’ face up to three years in prison and a fine of up to 50,000 Hong Kong dollars (£5,150). 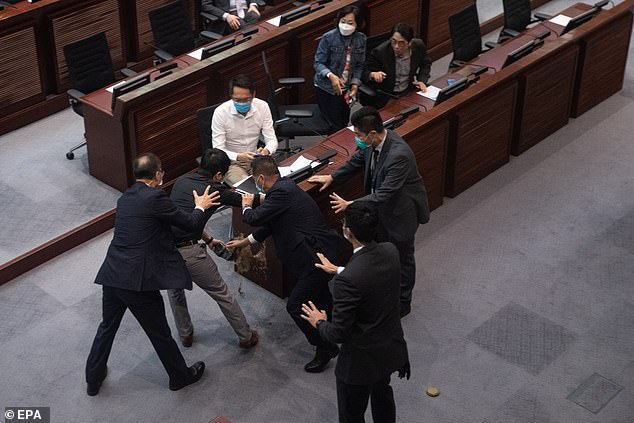 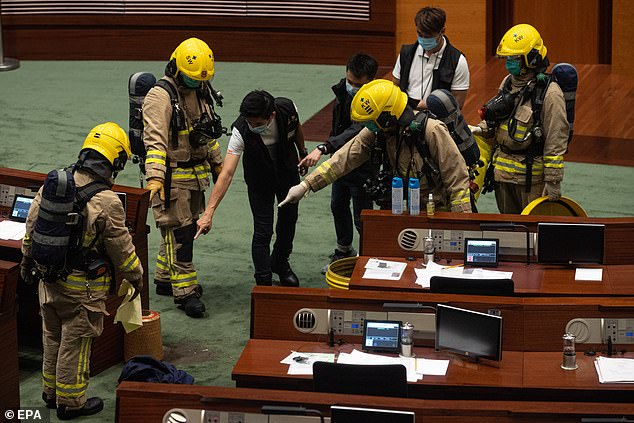 In Hong Kong’s Legislative Council chamber, the third reading of the National Anthem bill was interrupted when Ray Chan threw a foul smelling object on the floor. Pictured: Firemen and police inspect the object before the begin cleaning the chamber

The legislative debate was earlier suspended after pro-democracy lawmakers staged a protest, with one dropping a pot of pungent liquid in the chamber.

Raising a sign that said ‘A murderous regime stinks for ten thousand years,’ lawmaker Ray Chan walked to the front with the pot hidden inside a Chinese paper lantern.

When security guards tried to stop him, he dropped the lantern and the pot, and was ejected from the meeting. Another lawmaker who accompanied him was also ejected.

The chamber was evacuated and police and firemen were called in to investigate the incident.

When the meeting resumed in a second room, pro-democracy lawmaker Ted Hui again splashed some liquid at the front of the meeting room and was escorted out.

Legislative Council President Andrew Leung called such behavior irresponsible and childish, before calling for the vote.

The contentious debate over the bill comes after China’s ceremonial national legislature formally approved a decision last week to enact a national security law for Hong Kong that could see Chinese security agents posted in the city.

The national security law is aimed at curbing subversive activity, with Beijing pushing for it after a month-long pro-democracy protest movement at times saw violent clashes between police and protesters.

While experts have warned that the law could imperil Hong Kong’s status as one of the world’s best places to do business, at least two banks with a strong Asian presence have publicly backed the decision.

Bank HSBC said in a Chinese social media post that it ‘respects and supports all laws that stabilize Hong Kong’s social order,’ while Standard Chartered said it believed the national security law would ‘help maintain the long-term economic and social stability of Hong Kong.’ 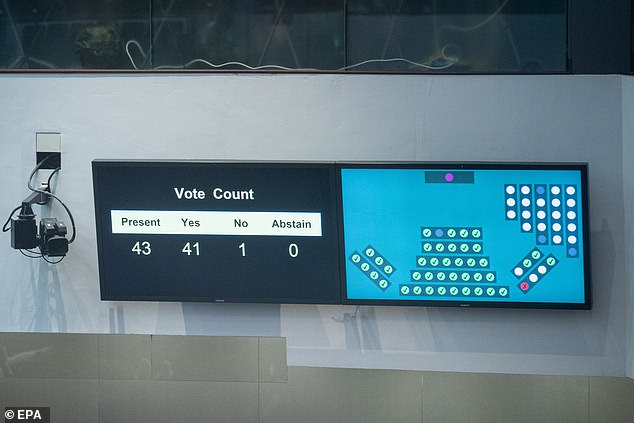 The bill was passed with 41 lawmakers voting for it and just one voting against, with many lawmakers boycotting the vote. Pictured: An electronic board displays the vote results for the National Anthem bill at the Legislative Council in Hong Kong, June 4 2020 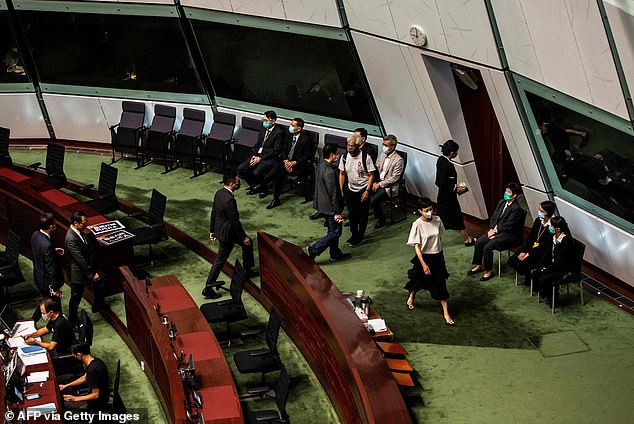 Prior to the first dirty protest in the Legislative Council, pro-democracy lawmakers could be seen walking out of the chamber, boycotting the vote on the national anthem bill, June 4 2020 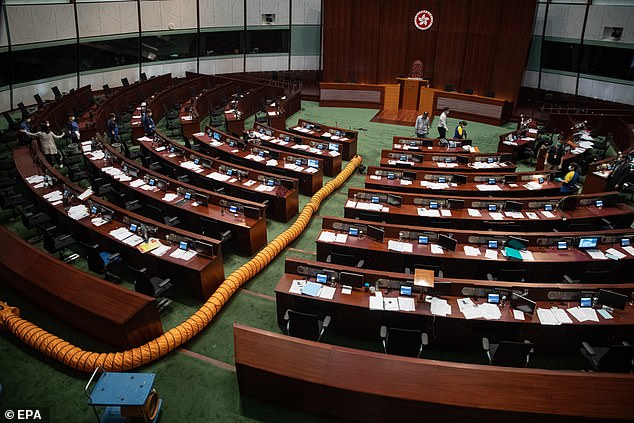 Workers installed a ventilation pipe running down the isle of the Legislative Council in Hong Kong after the room was evacuated following a dirty protest against the Chinese anthem bill, that was ultimately passed in a second room on June 4 2020

Opponents of the anthem bill and the national security law see them as signs of Beijing’s tightening control over the territory.

Beijing began pushing for the anthem law after Hong Kong soccer fans jeered the national anthem at international matches in 2015.

As anti-government protests engulfed Hong Kong last year, thousands of fans booed loudly and turned their backs when the anthem was played at a World Cup qualifier match against Iran in September. FIFA later fined the Hong Kong Football Association over the incident.

The legislative session on Thursday coincided with the 31st anniversary of China’s bloody crackdown on pro-democracy protests in Beijing’s Tiananmen Square.

Before debate began, pro-democracy lawmakers stood in silence to mark the anniversary and put up signs on their desks that said ‘Do not forget June 4, the hearts of the people will not die.’ 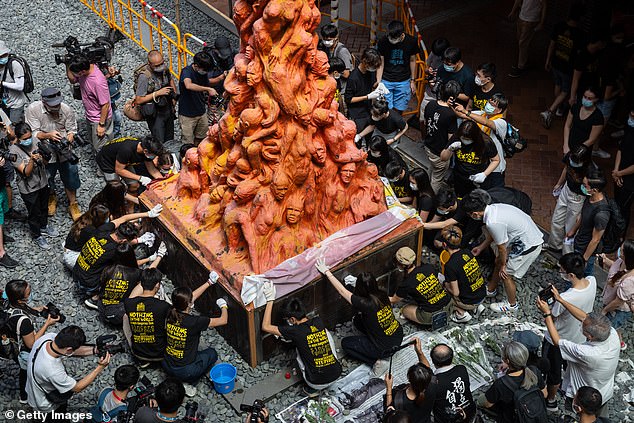 The vote on the Chinese national anthem bill on Thursday coincided with the 31st anniversary of China’s bloody crackdown on pro-democracy protests in Beijing’s Tiananmen Square. Pictured: University students clean the ‘Pillar of Shame’ statue, a memorial for those killed in the 1989 Tiananmen crackdown, at the University of Hong Kong on June 4 2020