HONG KONG (Reuters) – Pro-democracy candidates in Hong Kong romped to a landslide and symbolic majority in district council elections after residents turned out in record numbers on Sunday to vote following six months of anti-government protests in the embattled city. In a rare weekend lull in the unrest that has embroiled the financial hub, democratic candidates across the city of 7.4 million secured more than half of the 452 district council seats for the first time, against a strongly resourced and mobilized pro-establishment opposition.

Hong Kong’s district councils control some spending and decide a range of local livelihood issues such as transport, and they also serve as an important grassroots platform to radiate political influence in the city ruled by communist China.

Some winning candidates said the result was akin to a vote of support for the protest movement, and could raise the pressure on Hong Kong’s pro-Beijing chief executive, Carrie Lam, amid the city’s worst political crisis in decades.

“This is the power of democracy. This is a democratic tsunami,” said Tommy Cheung, a former student protest leader who won a seat in the Yuen Long district close to China’s border.

Initial results from the voting, which ended with no major disruptions in a day that saw massive queues form outside many voting centers, began to trickle in after midnight.

As of 5:00 a.m. (2100 GMT), pro-democracy candidates had secured a majority with at least 283 seats, compared to about 32 seats for the pro-establishment camp, according to local media estimates. A record 1,104 candidates were vying for 452 seats.

Electoral affairs chief Barnabus Fung said at least 2.94 million people voted, a record turnout of more than 71% that appeared to have been spurred by the turmoil. About 1.47 million voted in the last district elections four years ago.

“The performance of the pro-democracy camp will send a signal to Beijing,” said Andrew Li, a 22-year-old student who supported a pro-democracy candidate. “By ignoring people’s demands, it wakes up all Hong Kong people to come out and vote.”

Demonstrators are angry at what they see as Chinese meddling in the freedoms promised to the former British colony when it returned to Chinese rule in 1997. They say they are also responding to perceived police brutality.

China denies interfering and says it is committed to the “one country, two systems” formula for the autonomy of Hong Kong. Police say they have shown restraint in the face of potentially deadly attacks.

Jimmy Sham, a candidate for the Civil Human Rights Front, which organized some of the anti-government rallies, won his electoral contest and said the turnout should be a sign to the government that it should listen to their voices.

“This election is special because it is a formal confrontation between pro-establishment and pro-democracy parties after months of unrest caused by the misstep of government,” he said, standing on crutches weeks after he was beaten by men with hammers during a rally in October.

“It is a victory for the people of Hong Kong.”

Other successful pro-democracy candidates included Lester Shum, a former student leader of the umbrella movement in 2014, and Kelvin Lam, who stood in after activist Joshua Wong was barred from running.

A number of pro-Beijing heavyweights including Junius Ho, an incumbent injured in a knife attack this month, lost to a pro-democracy challenger. In a message on his Facebook page, Ho said it had been an “exceptional year, an exceptional election, and an unusual result”.

Some veteran pro-Beijing politicians, who have been shoo-ins in previous polls, attributed their losses to the broader discontent.

“Our loss is not because of our work in the local districts, it’s because of the political sentiment,” said Horace Cheung, who noted he received 500 more votes this year than four years ago, but still lost.

Casting her ballot, Hong Kong’s chief executive Lam, who is backed by Beijing, pledged that her government would listen more intensively to the views of district councils.

“I hope this kind of stability and calm is not only for today’s election, but to show that everyone does not want Hong Kong to fall into a chaotic situation again,” Lam said.

The protests started over a now-withdrawn extradition bill that would have allowed people to be sent to mainland China for trial but rapidly evolved into calls for full democracy, posing the biggest popular challenge to Chinese President Xi Jinping since he came to power in 2012.

The protests have at times forced the closure of government, businesses and schools as police used tear gas, rubber bullets and water cannon in response to petrol bombs and rocks. 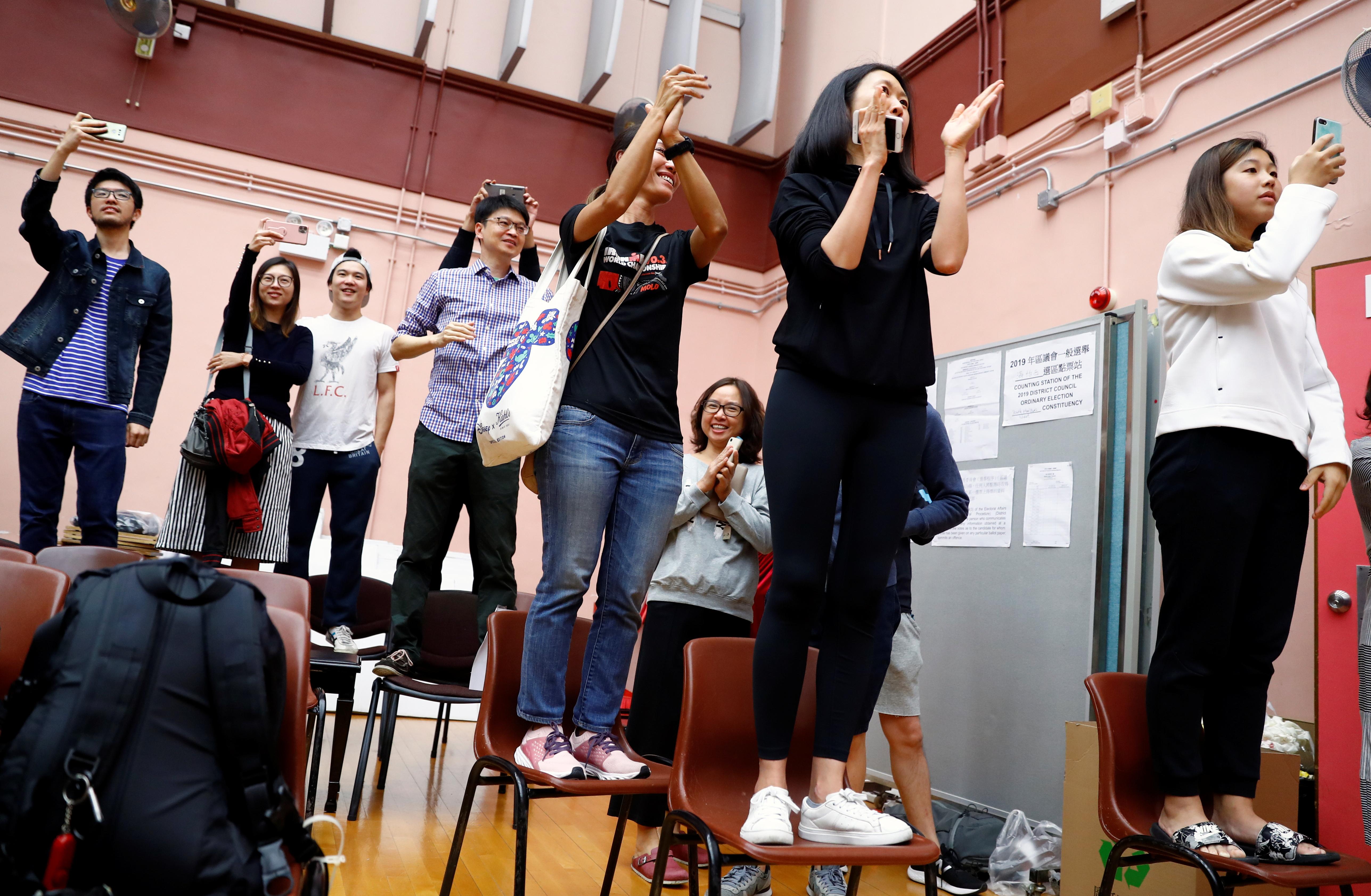 The run-up to the election was marked by attacks on candidates, with Ho stabbed and wounded and another having part of his ear bitten off.

Sunday was also the seventh day of a standoff at Polytechnic University, whose campus has been surrounded by police as some protesters hid out on the grounds.

“The government needs to know that if they don’t answer our demands, we will continue demanding and the protests will not stop,” said a 26-year-old pro-democracy voter who gave her name as Cda.