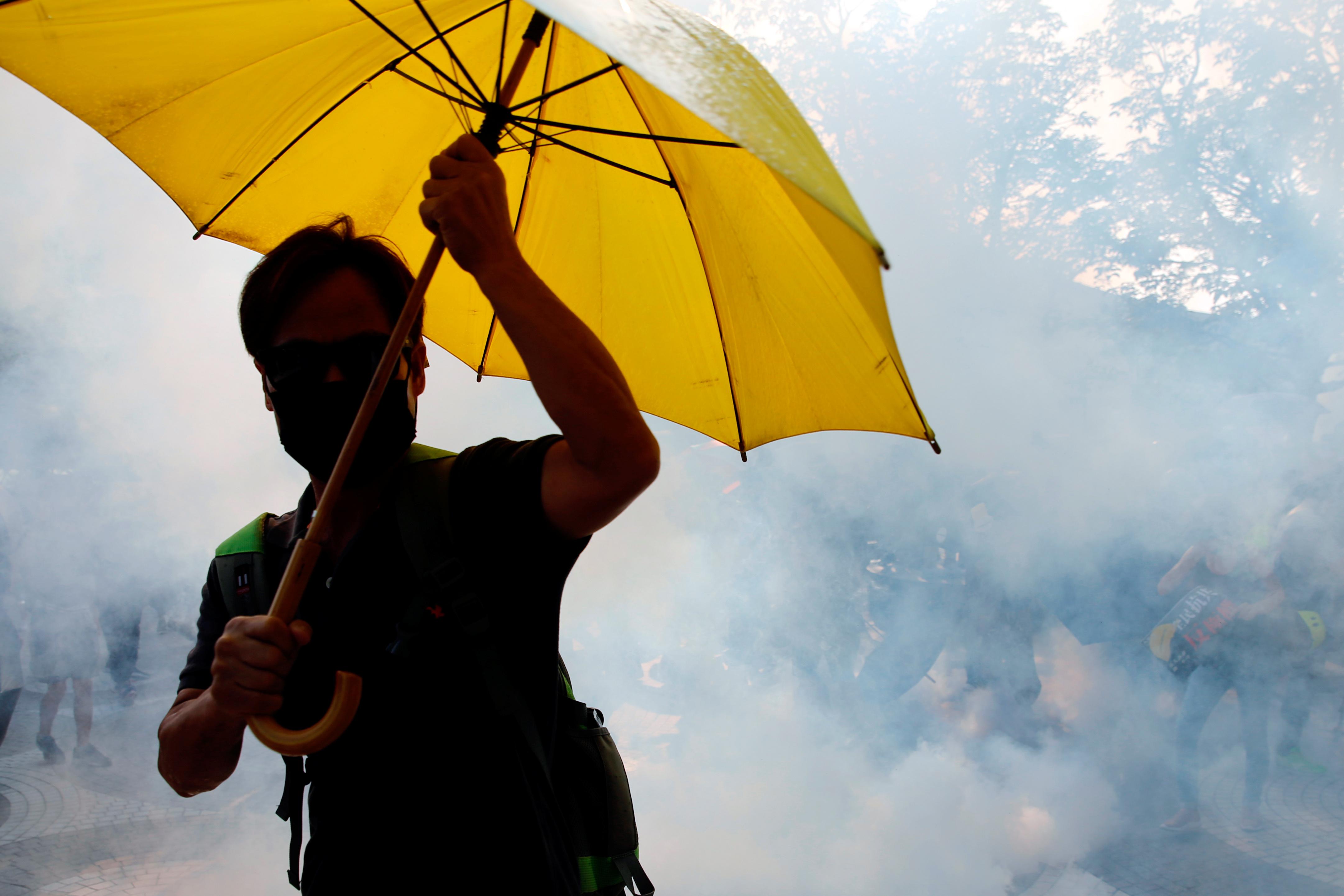 There was a standoff as dusk began to fall in the Chinese-ruled city, with pro-democracy protesters and bemused tourists gathered on the pavements of the shopping and hotel artery of Nathan Road, which police had earlier cleared in slow-moving cordons.

Riot police stood by outside the Chungking Mansions high-rise warren of South Asian restaurants and backpacker hostels, shields and batons at the ready. Protesters shouted obscenities in colorful Cantonese at “black police”, referring to perceived over-use of force.

“Fight for Hong Kong!” protesters shouted, “five demands, not one less”, a reference to demands for universal suffrage and an independent inquiry into police actions, among other things.

Police later moved away, leaving protesters, pedestrians and tourists alike to take over the street under the neon lights. Then one water cannon moved in, firing high into the air and down side-streets.

The number of protesters had grown by the minute earlier in the afternoon, streaming down Nathan Road to the water’s edge, in front of the dramatic backdrop of Hong Kong island, but many fled after the tear gas and pepper spray were fired.

Ambulances took one man away on a stretcher. The need for treatment was not immediately clear.

Police detained some protesters as they gathered, many yelling profanities while police used loud-hailers to warn others away. The crowds at the waterfront had largely dispersed after a couple of hours and headed north up Nathan Road, where many luxury brand shops closed their shutters.

The rallying cry of the protesters was also for the protection of “Muslims, journalists and the people”.

A police water cannon fired bursts of blue-dyed water at a small group of people outside a Nathan Road mosque during protests last weekend, drawing criticism from some in the Muslim community. There was a large crowd of police outside the mosque on Sunday.

Billy, 26, a salesman who did not want to give his full name, said he turned out on Sunday because he was angry at the spraying of the mosque a week earlier.

“Hong Kong people, regardless of our religion … we come here to say no to our totalitarian government,” he told Reuters, adding he wanted to protest peacefully. “I have a little bit of fear … because our police sometimes they are uncontrollable and they threaten the safety of our people.”

Vick, 26, a social worker standing outside Chungking Mansions, said he was there in solidarity with South Asians.

Cindy Chu, 65, a retired nurse, said the police used to be a force for good.

“It’s so simple. They are disturbing the Hong Kong people,” she said. “And what for? What authority do they have to do that? It’s Hong Kong, not China.”

She too was wearing a face mask, banned under a colonial-era law reintroduced by Hong Kong leader Carrie Lam this month.

Pro-democracy activists have in recent weeks attacked police with petrol bombs and rocks and slashed one officer in the neck with a knife. Police have responded with tear gas, water cannon, rubber bullets and occasional live rounds, wounding several protesters and a few journalists.

Police deny accusations of brutality, saying they have shown restraint in life-threatening situations. There had been a week-long lull in clashes.

Protesters are angry about what they view as creeping Chinese interference in Hong Kong, a former British colony that returned to Chinese rule in 1997 under a “one country, two systems” formula intended to guarantee freedoms not seen on the mainland.

China denies meddling. It has accused foreign governments, including the United States and Britain, of stirring up trouble.

Financial Secretary Paul Chan said on his blog that the quarter-on-quarter contraction recorded in the three months ending in June had extended into the third quarter.

Two successive quarters of contraction are the technical definition of a recession. 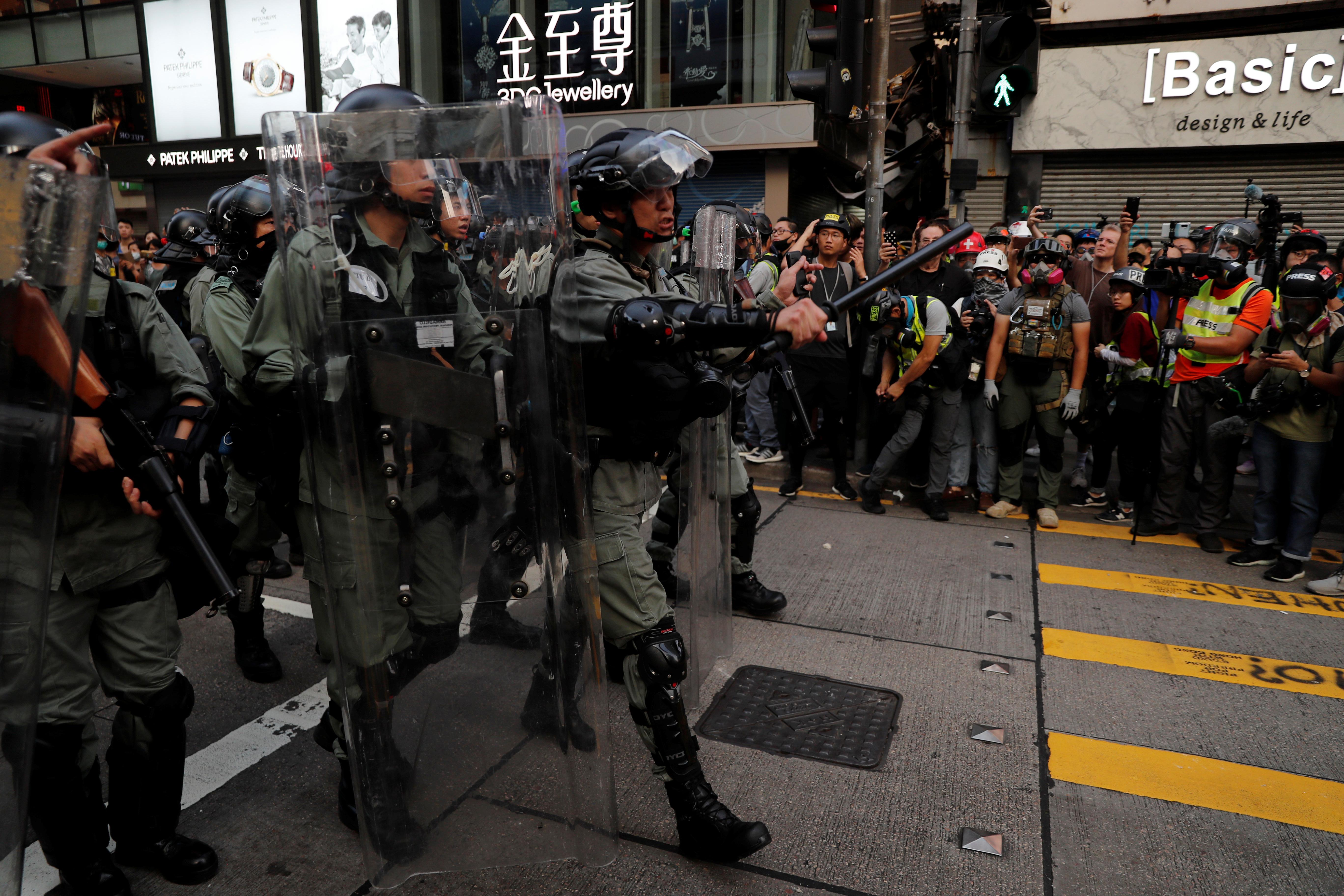 Given that there were no signs of recovery, Chan said it would be “extremely difficult” to achieve an annual growth target of between 0% and 1% this year.

He said the economy had come under strain on all fronts. “The true remedy was for all quarters in society to stop violence, return to rational dialogue and seek a way out,” he said.