Hundreds of Hong Kong protesters have marched to the US consulate waving American flags to show ‘gratitude’ for their support for the demonstrations that have roiled the China-ruled financial hub for nearly six months.

Some held banners reading ‘President Trump, please liberate Hong Kong’ and ‘Let’s make Hong Kong great again’ – a riff on his 2016 campaign pledge to make America great again. One showed him standing atop a tank with ‘Trump’ emblazoned on the front and side. 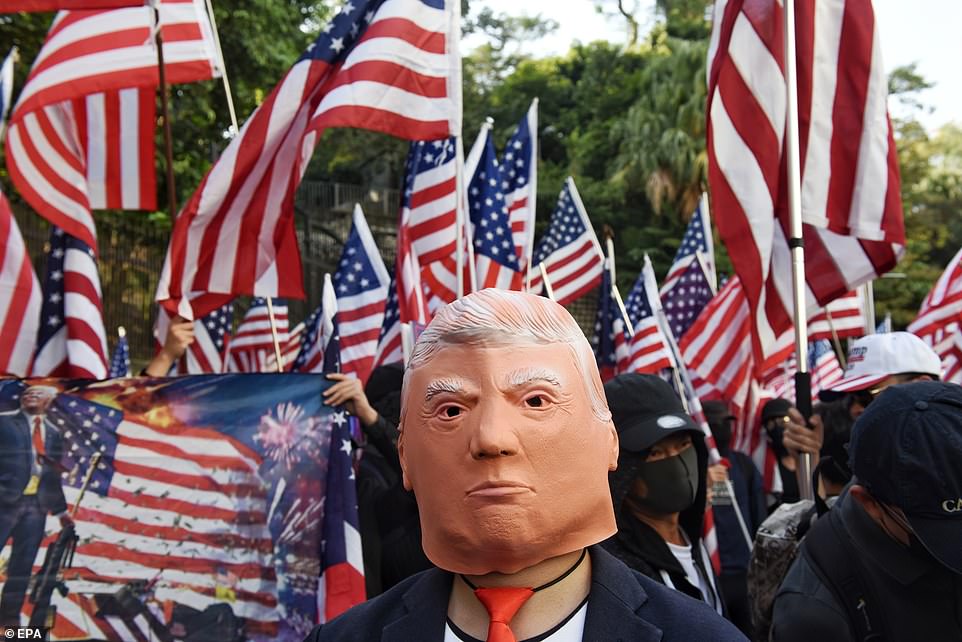 A pro-democracy protester dressed as US President Donald J. Trump takes part in a ‘March of gratitude to the US’ in Hong Kong 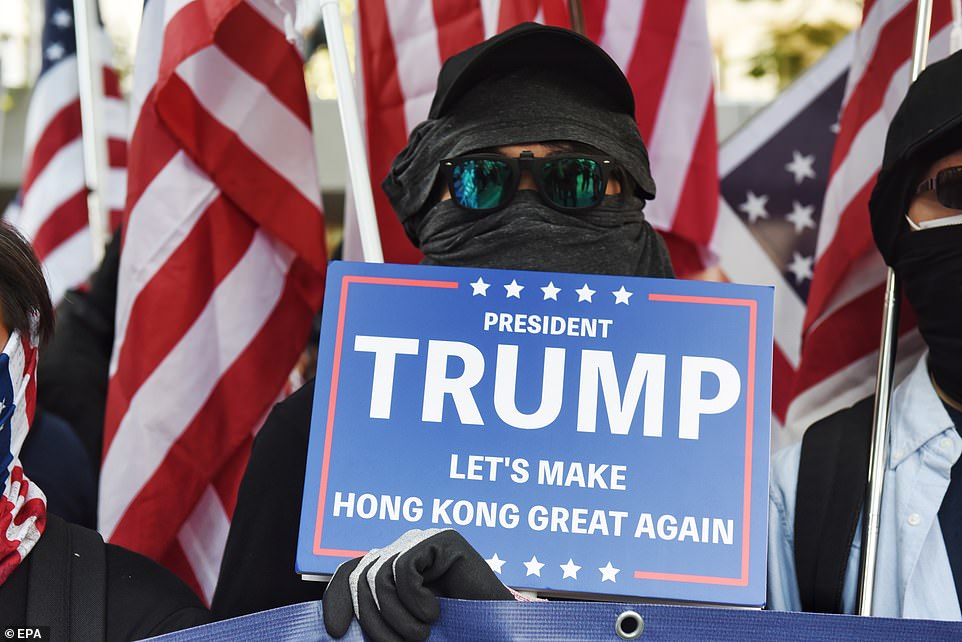 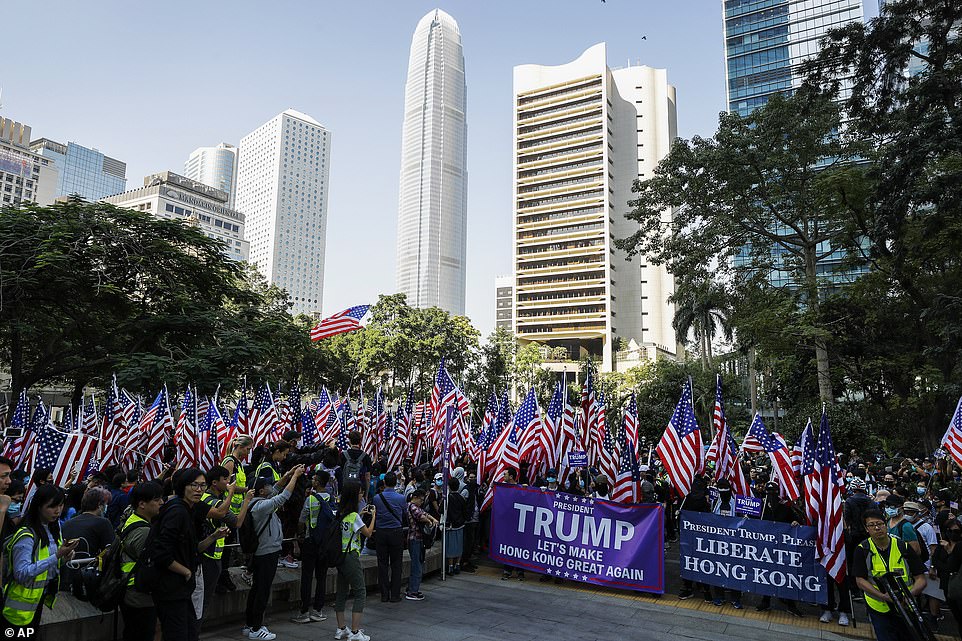 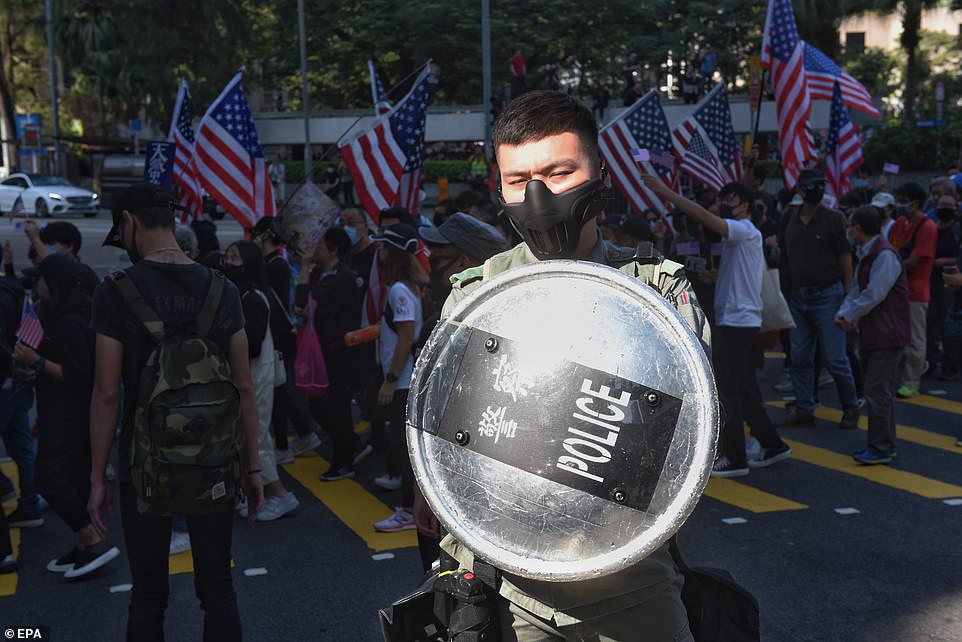 The marches came one week after pro-democracy candidates won a landslide victory in district-level elections.

Elsewhere today, tens of thousands of black-clad protesters flooded into the streets, a day after police clashed briefly with demonstrators, firing tear gas for the first time since the November 24 district council elections.

Hong Kongers have rallied in huge numbers over the last six months, fuelled by years of growing fears that authoritarian China is stamping out the city’s liberties.

Those turning out on Sunday said they were determined to keep up the pressure on local authorities who have offered no concessions despite the electoral result.

‘The government are still not listening to us so the protests will go on, they will not stop,’ said a 20-year-old student who gave only his surname, Chen. 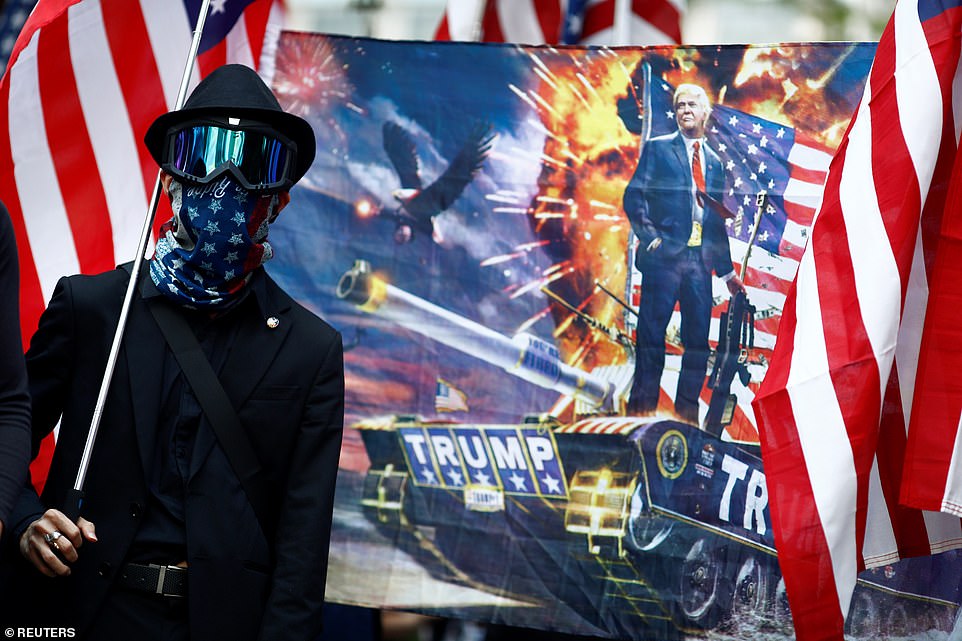 A masked protester attends a ‘March of Gratitude to the US’ event in Hong Kong, thanking President Trump who is displayed in a flag standing on a tank 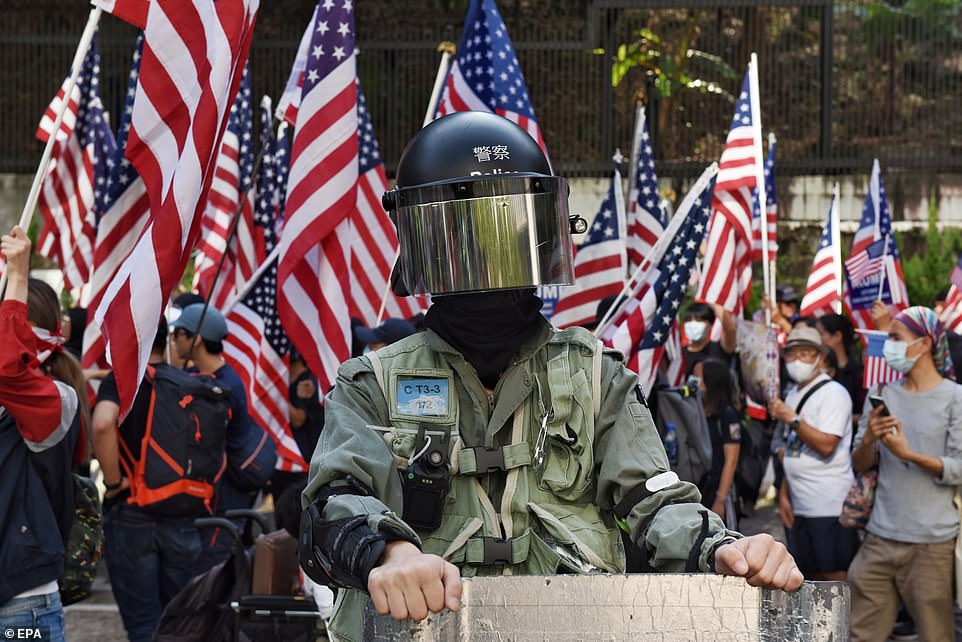 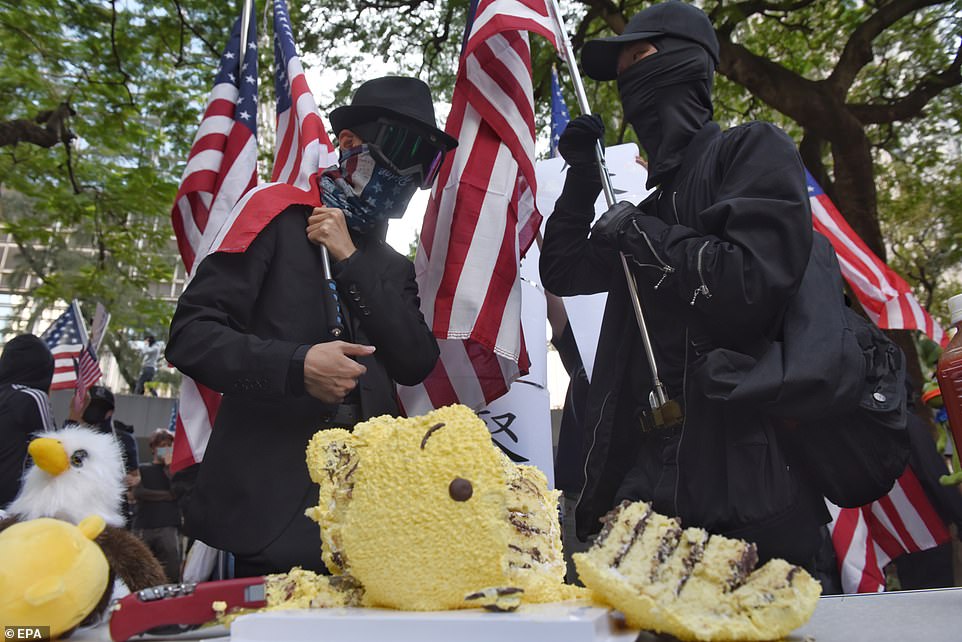 ‘It is hard to predict what will happen. But the people are still very angry and want change,’ he told AFP in the Tsim Sha Tsui neighbourhood, where protesters marched along the bay front.

‘Never forget why you started,’ read a banner carried by protesters taking part in the march. A little girl with her hair in pigtails led chants reiterating the movement’s demands for direct elections of the city legislature and leadership.

As one part of the march ran into a police blockade, officers warned protesters not to proceed, saying they were straying from the permitted route.

An officer sprayed pepper spray towards the protesters who held out umbrellas to protect themselves and hurled abuse at the police.

‘I would like to send a message to the government: we are not done and this is not over,’ said one 27-year-old protester, who declined to give his name. 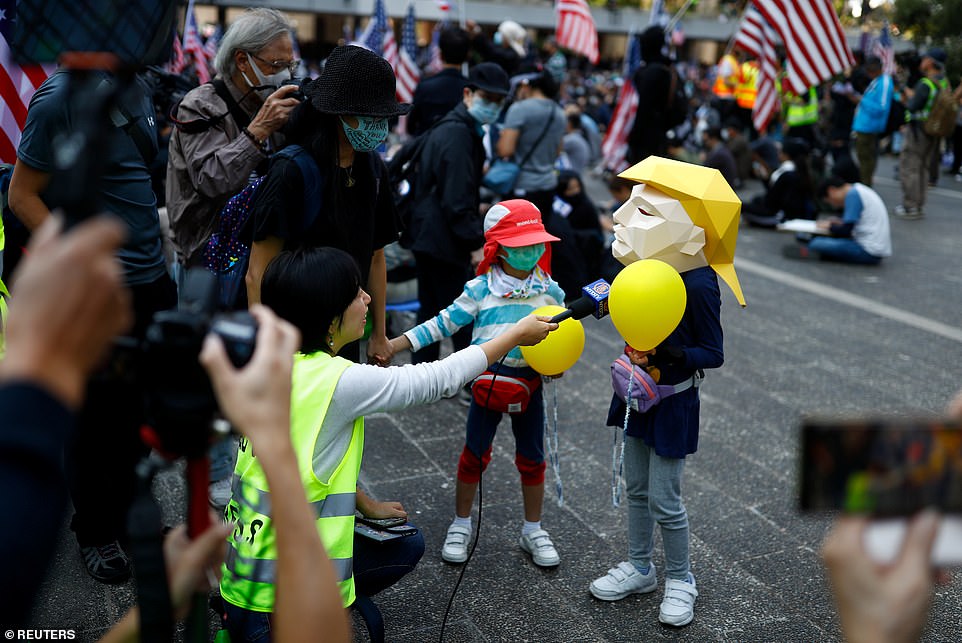 A child with a paper mask of U.S. President Donald Trump is interviewed by a journalist during the march 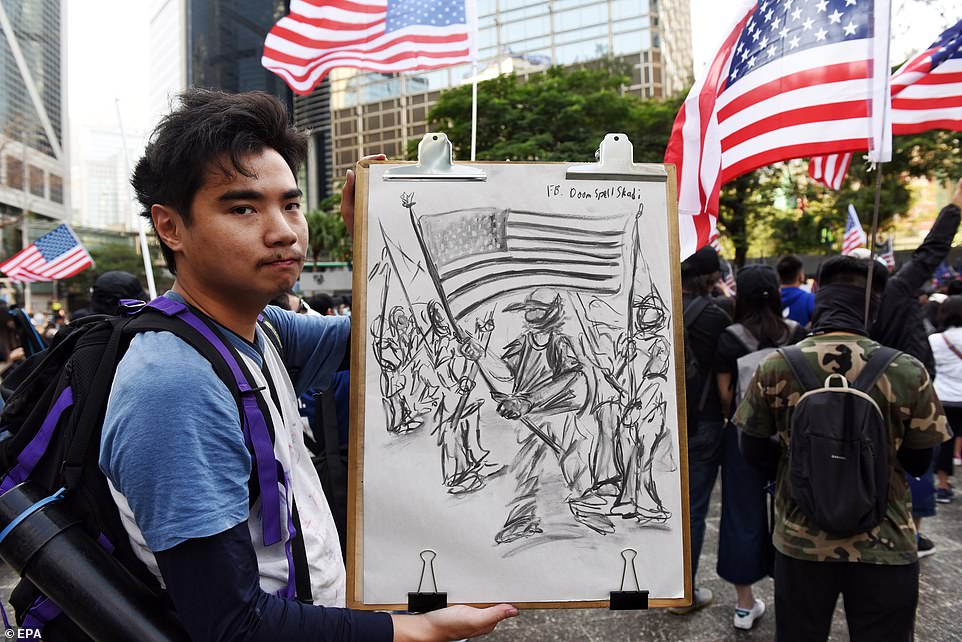 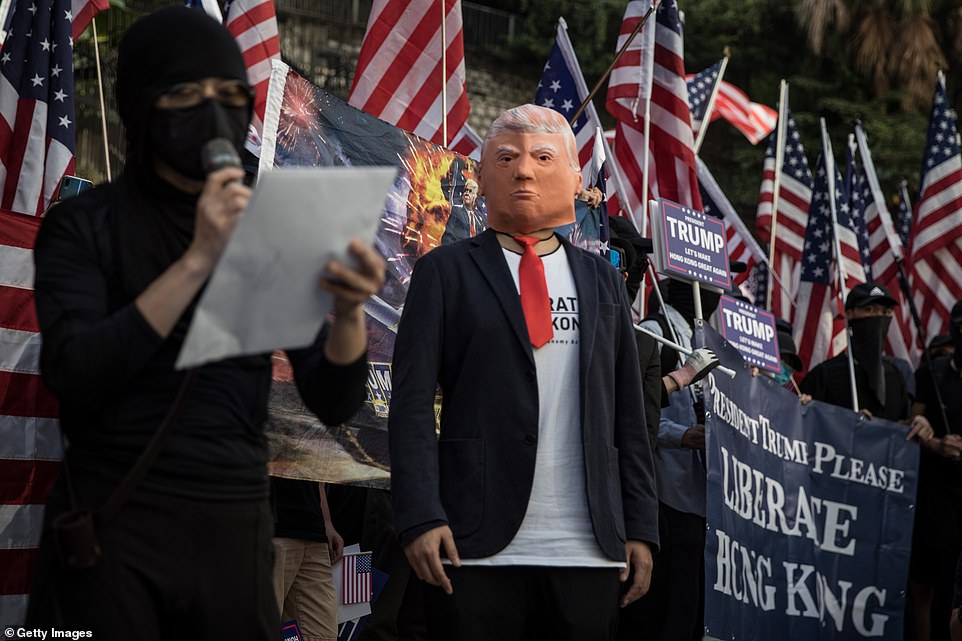 He said he hoped that Sunday’s demonstrations, all of which received permits called ‘letters of no objection,’ would stay peaceful.

‘I do worry that public opinion may change if violence and clashes continue,’ he said.

But echoing the views of many activists who defend the violent nature of protests, he said he feared the movement would ‘simply wither if we adopt a completely peaceful manner.’

Among the demonstrators were children, including a 13-year-old who gave only her family name, Leung.

‘I believe Hong Kong people will continue to take to the streets, otherwise the government may mistakenly believe that we have let go of our demands,’ she told AFP. 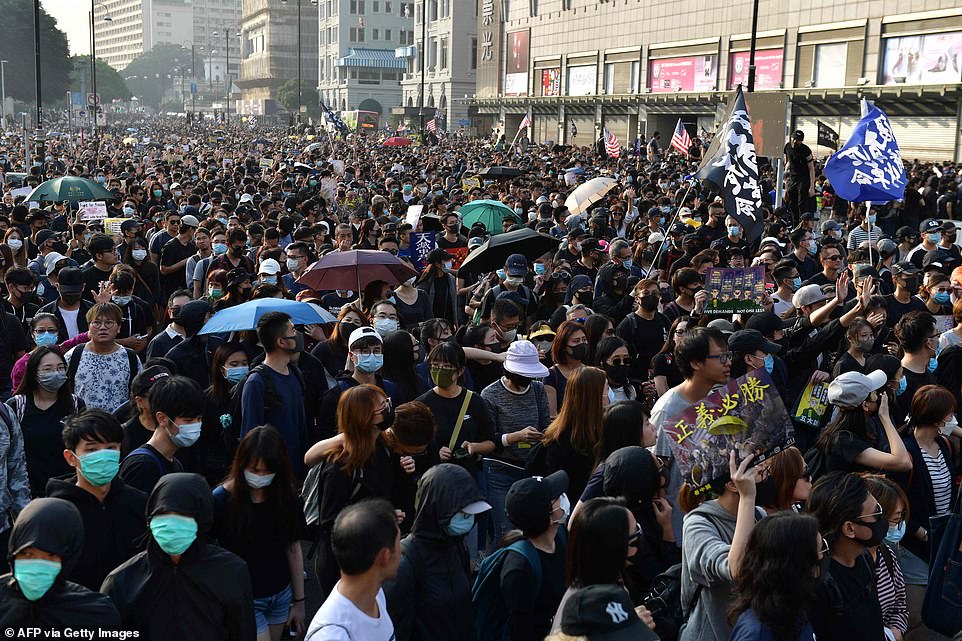 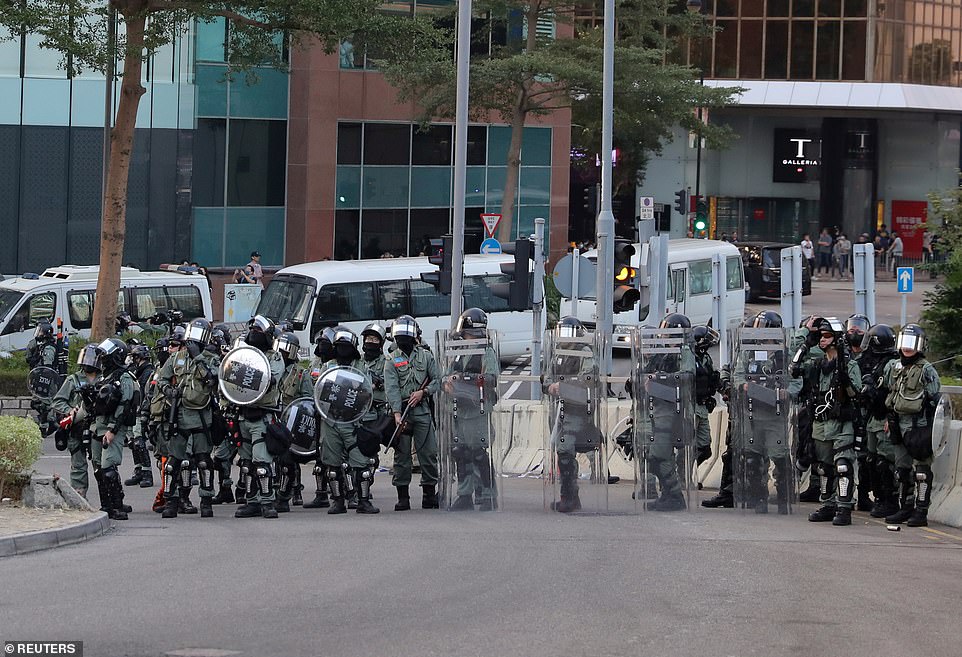 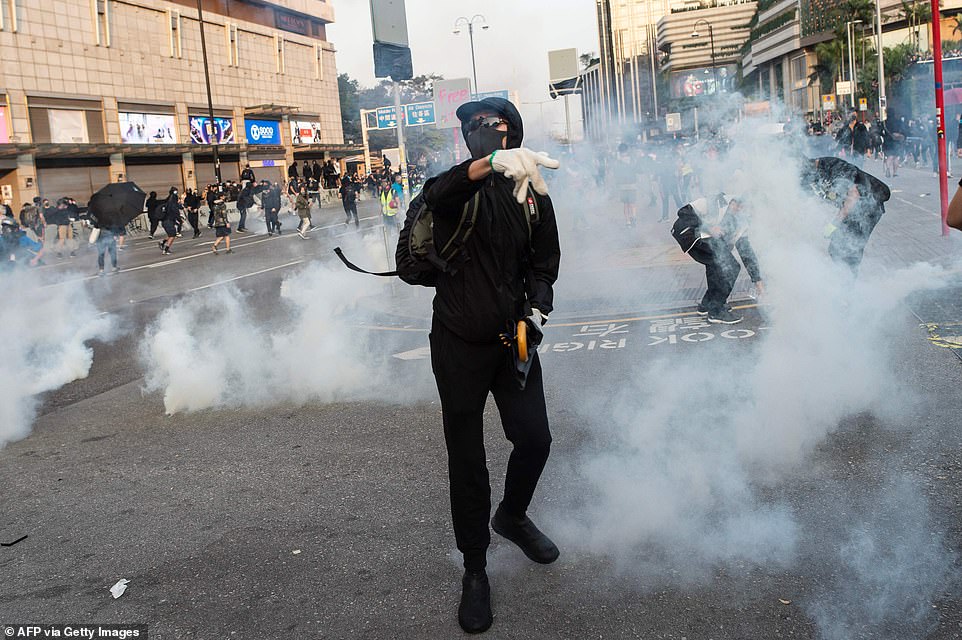 Hong Kongers have rallied in huge numbers over the last six months, fuelled by years of growing fears that authoritarian China is stamping out the city’s liberties

‘I will join as often as I can, even just to make the headcount larger.’

Months into the huge protests kicked off by opposition to a bill allowing extradition to China, pro-democracy demonstrators still appear to command widespread support – with the victory of pro-democracy candidates undercutting government claims of a ‘silent majority’ opposed to the movement.

Ahead of Sunday’s rallies there were calls from organisers for people to remain ‘highly restrained’ with fears of a return to the violence that has marked more recent months in the political crisis.

On Saturday night police fired tear gas for the first time since the election as protesters blocked roads in the Mong Kok neighbourhood.

A video from the neighbourhood that emerged online also showed a protester brutally assaulting a man as he attempted to clear a barricade.

The commentator mocks the man, who stumbles and then slumps over after being hit across the head with a heavy metal object, blood trickling from a wound.

In a statement, police confirmed the incident: ‘So far no one has been arrested. The victim suffered a serious head injury and was sent to hospital.’

‘It could have killed him,’ Tang said.