Hong Kong protesters voiced fresh outrage today after a student who fell from a parking garage during clashes with police died in hospital this morning.

Chow Tsz-Lok, 22, had been in a coma since he was found unconscious in a pool of blood on Monday.

Riot police had been firing tear gas moments earlier, and although the nature of his fall is unclear, his death has sparked further anger at alleged police brutality.

Some 1,000 masked protesters marched at lunchtime chanting ‘Disband the police force’ and chanting: ‘A blood debt must be paid in blood’. 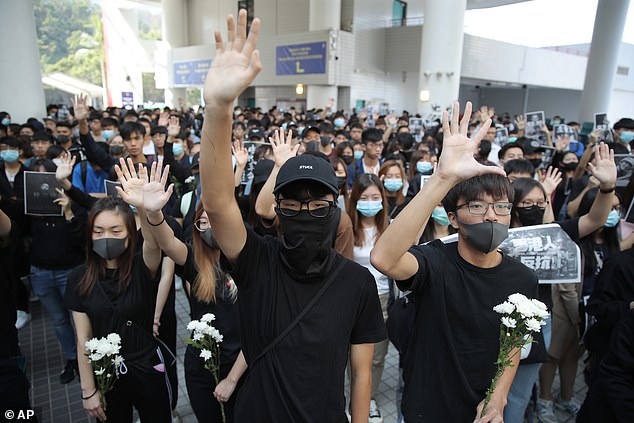 Anger: Masked protesters hold up their hands during a demonstration today at the University of Science and Technology where Chow Tsz-Lok was a student 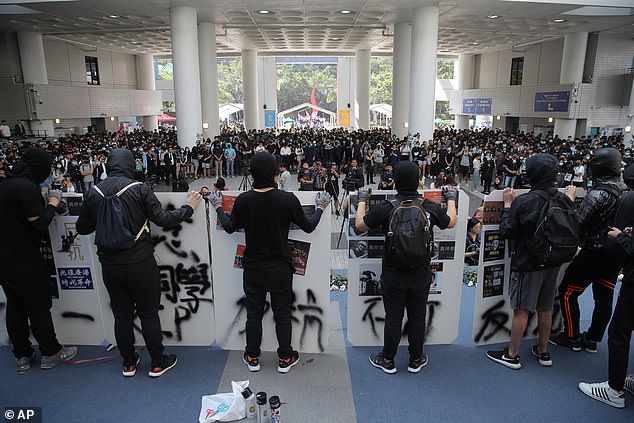 Intervention: Protesters disrupt a graduation ceremony at the University of Science and Technology in Hong Kong today 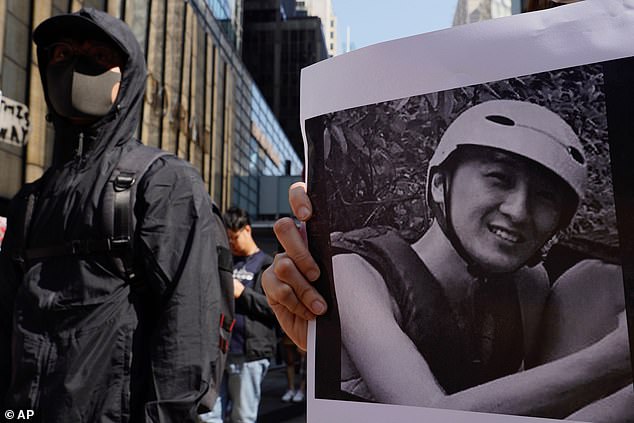 Fatality: A protester stands next to a photo of Chow Tsz-Lok, who had been in a coma since he was found unconscious in a pool of blood on Monday

‘His death is a reminder to us that we cannot give up,’ one protester said on local television.

Some protesters carried white flowers and placards that read: ‘Hong Kong is a police state.’

Chow’s angry classmates disrupted a graduation ceremony at the University of Science and Technology where the 22-year-old had been a student.

The ceremony was cut short, and black-clad masked students turned the stage into a memorial for Chow.

White flowers were laid below the stage as students announced plans to boycott class for a week and demanded the truth in Chow’s death.

The university president dabbed away tears as he announced Chow’s ‘tragic’ death on Friday on the second day of the convocation.

The student union said they would hold another vigil in the evening while the university urged students to stay calm to ‘avoid further clashes and tragedy.’ 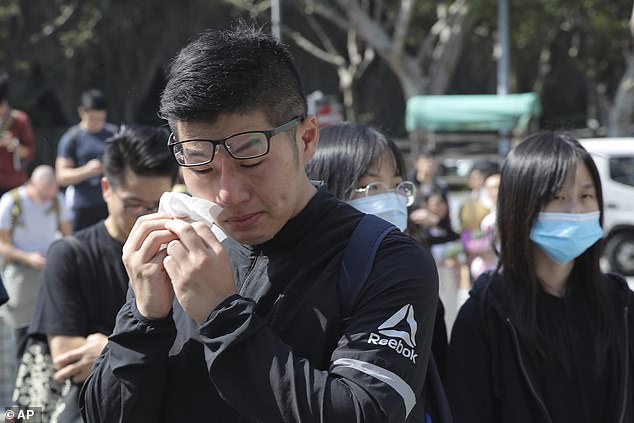 Mourning: A man wipes away tears as he attends a makeshift memorial for the 22-year-old student at the university, where protesters disrupted a graduation ceremony 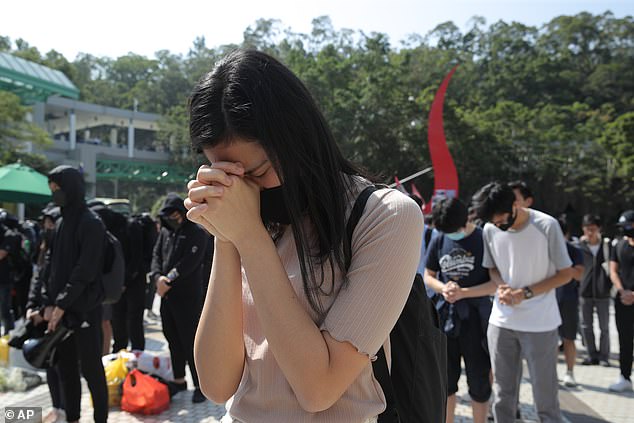 Moment of silence: Protesters pause on the university campus today after the student who fell from a parking garage during clashes with police died in hospital this morning

Local media reported that Chow had been in a coma with brain injury since he was found in a pool of blood on the second floor of the car park on Monday.

Minutes earlier, television footage showed riot police firing tear gas at the building after objects were hurled at the officers in the street.

It is feared he may have been fleeing from tear gas, but his fall was not captured by security cameras.

Police also denied claims that officers pushed the victim down or had delayed emergency services.

The government expressed ‘great sorrow and regret’ over Chow’s death despite undergoing surgery and treatment.

‘The police have stated earlier that they attach great importance to the incident and the crime unit is now conducting a comprehensive investigation with a view to finding out what happened,’ it said in a statement.

There have been only few fatalities amid the months-long unrest, with previous reports of suicides and a man who fell to his death while hanging pro-democracy banners on a building. 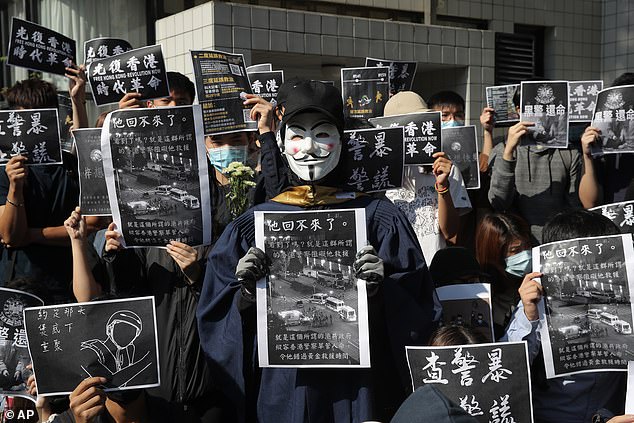 Anger: A masked protester stands at the front of a crowd of people holding placards against alleged police brutality during Hong Kong’s months-long protests 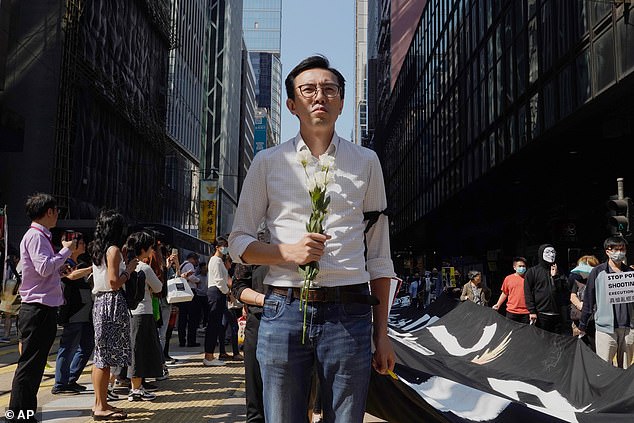 Remembrance: A man holds a flower as he takes part in a memorial event. There have been only few fatalities amid the months-long unrest

The protests were sparked by a since-abandoned bill that would have allowed extradition to mainland China.

The bill sparked fears of Beijing’s influence in Hong Kong despite the freedoms guaranteed to the city when it returned to Chinese rule in 1997.

Since then, the protests have mushroomed into a wider rebellion and a demand for more democracy, including direct elections for Hong Kong leaders.

Police tactics during the demonstrations have fuelled further anger and calls for an investigation into alleged brutality.

More than 3,300 people have been arrested and Beijing has indicated it may tighten its grip to quell the unrest.