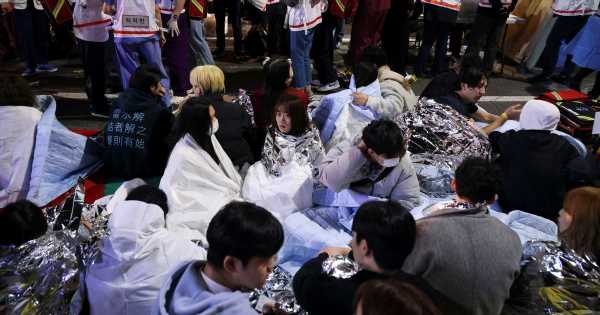 A horrific Halloween stampede that killed more than 146 people and injured over 100 has seen dead bodies line the street following the tragedy.

Halloween celebrations were dramatically cut short in Itaewon, Seoul in South Korea following a stampede that crushed hundreds and caused a number of cardiac arrest events.

Following on from that, over 150 people were reported dead by local emergency services, while over 100 were said to be in a serious condition.

The harrowing scene saw dozens take to social media to share graphic footage and horrifying shots of the area, with thousands more offering their condolences.

President Yoon Suk-yeol had ordered emergency services to administer first aid at the scene, with more than 400 responders attending the event.

An emergency pop-up medical station was also reported at the scene, with those injured in the stampede cared for by responding medical officials and bystanders.

One user took to Twitter to describe the "devastating situation", which has so far seen at least 146 people dead and over 150 injured.

Another wrote "I can barely believe what I am seeing" in response to the horrific scenes.

Reports from ITV claimed that a mass group attempted to rush a bar in the area after reported sightings of an unnamed celebrity.

A local police representative confirmed that the event was currently under investigation, while thousands took to social media to pay their respects to those that had found themselves affected by the stampede.

Dozens of images from the horrific event were shared on social media, with dead bodies seen lying in the streets while other footage showed people receiving CPR.

Roughly 100,000 people are said to have been attending events in and around Itaewon as part of a weekend of Halloween celebrations.