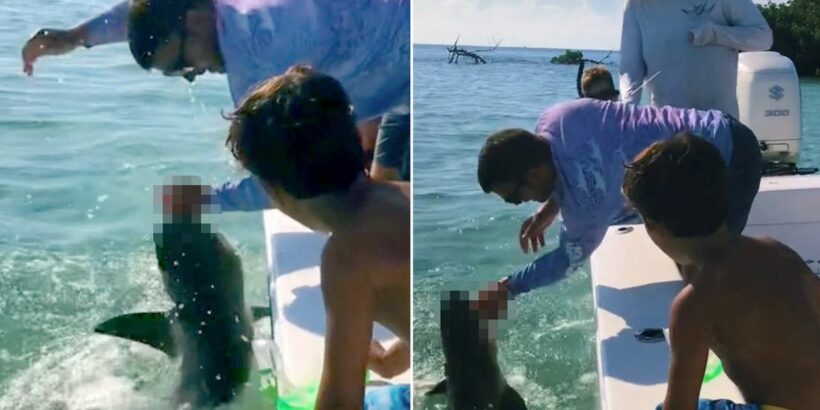 This is the terrifying moment a man has his finger torn off by a shark when he tried to remove a hook from the seabeast.

Brett Reeder took his family out for a fishing trip off the coast of Florida on Tuesday (July 19) and got themselves a surprise when he caught a small predator.

Video shared by his wife, Mandy, has gone viral showing Brett attempting to pick up the shark to impress his son.

The father holds onto the shark's fin and puts his other hand right under its mouth to lift it up from the water.

But the shark writhes and bites onto Brett's hand, thrashing around with blood covering its teeth.

Mandy did not give updates on her husband's situation but wrote in the caption: "Play stupid games, win stupid prizes. Here she is in all her glory."

But viewers were surprised by Brett's reaction as he lost his finger.

One said: "He said 'damn it I lost my pinky' like he dropped his phone in the water."

"You can hear the rip and pop, hope he's doing good," another wrote. A third added: "That was the most causal just loss my pinky reaction. Glad he got to keep them all. Speedy recovery!"

Bekah Kashtan, who was on the boat with the family, left a comment and said: "So glad my mum and I were there to help with the quick medical attention and how Mandy stayed so calm for the kids.

"What a crazy son of a gun, I hope your hand heals up good and quick. You're seriously the coolest person I know."