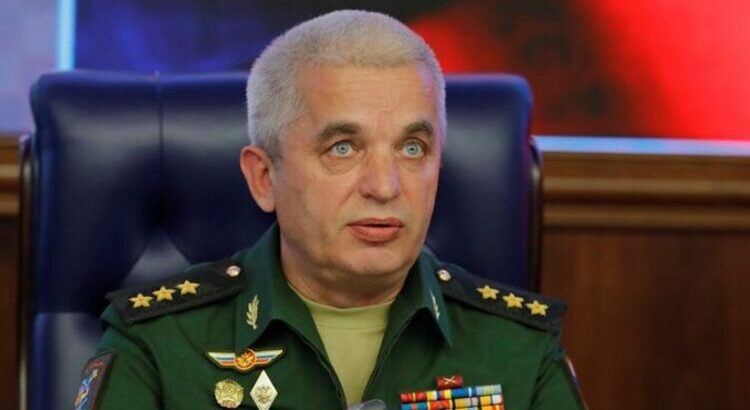 Colonel-General Mikhail Mizintsev, who is officially the director of the Russian National Centre for Defence Management, is at the head of the onslaught of the besieged Ukrainian city of Mariupol. In an intercepted phone call, Mizintsev appeared to call for other army officers to attack the private, and for his face to be “messed up”.

The audio clip was shared by Olexander Scherba, Ukraine’s former ambassador to Austria, who denounced the Colonel-General as the “Butcher of Mariupol”.

In the recording, Mizintsev raged: “Look at that scum standing there, frowning with his bovine eyes, showing me his unhappy face, his stinking mug.”

He then asked why the officer was not “limping by now”.

He continued: “Why is he still serving? And why should I have to waste my time with your scum?

“If you’re the head of a unit, then step up to the plate.

“Why is his face not mutilated yet?

“Why hasn’t anyone cut off his ears? Why isn’t this moron limping yet?

“At night, when he walks out, unknown assailants jump him.

“Just jump him over and over, beating him in the face with a bottle and then pouring another litre into it.”

Ukrainian authorities have accused Mizintsev of orchestrating the horrific bombing of a Mariupol maternity hospital, as well as bombarding a theatre that had been used as a makeshift bomb shelter.

An estimated 300 people were killed in the attack, according to an advisor to the city’s mayor.

Petr Andryuschenko told the BBC that around 600 people had sought safety in the theatre.

It is thought to be the largest loss of life in a single strike of the entire invasion effort so far.

Russia has denied responsibility for the attack.

Ukrainian authorities have said that up to 90 percent of the port city has been obliterated or damaged since the invasion began.

Sergey Bratchuk, a spokesperson for the military administration in Odesa, claimed Mizintsev was responsible for hundreds of innocent deaths.

He alleged: “He ordered the bombing of a maternity hospital, children’s hospital, drama theatre, and civilian homes.=

“It is he who is destroying Mariupol, as he used to destroy Syrian cities.”

Heading up the Russian National Centre for Defence Management, it is likely Mizintsev was involved in the Russian intervention in Syria, in support of Bashir al-Assad.

This comes after the UN identified a mass grave in Mariupol that could hold the bodies of 200 people.

Matilda Bogner, who heads up the UN Human Rights Monitoring Mission in the country, said the organisation was working to establish the scale of the mass grave.

She said: “One mass grave we’ve been able to get satellite information on, and we estimate that one of those mass graves holds about 200 people.”

However, these may not all be civilian casualties, she added.

Officials in the area said the estimated death toll could be in excess of 3,000 just in the besieged city, but this is hard to verify.