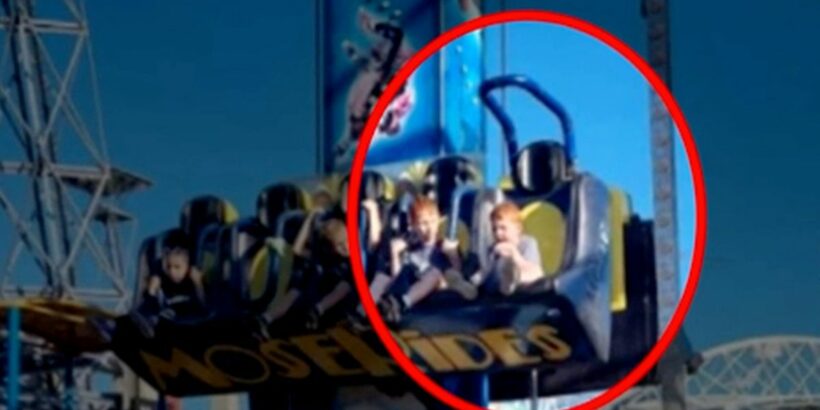 A four-year-old boy has dodged a potentially fatal plunge after concerned witnesses pointed out that his harness on a "free fall" ride was not secured.

The ride was just seconds away from starting when passers-by and fellow ride users noticed the terrifying situation where the youngster was not secured in his seat.

Tristan Curtis' harness for the ride at Australia's Sydney Royal Easter show had not been secured in place, with the seat needing to be locked into place before the ride.

Curtis' mum, Sky Bourstani Curtis, watched on in horror with several others as they realised the seat harness was not locked in place.

Images of the four year old have been shared online, showing clearly that the restraint is high above the head of the four-year-old and that other restraints next to young Tristan are securely in place.

Mum Sky Bourstani Curtis said: "The [operator] girl stopped the ride but didn't get out of her booth so another father ended up getting him to climb down to him.

"Myself and my husband were not tall enough to reach him. They simply did not pull his harness down, didn't check him."

The mum added that her son has autism and it was "difficult" to know how the youngster was feeling after the terrifying event. Another witness has claimed the operator of the ride had "no idea" that the boy was in danger after not being secured in place, The Sun reported.

Eva Levy said: "They hit emergency stop but it seems like the operator couldn't bring the ride down and someone actually had to go up there and have his son jump into his arms. Onlookers had to scream for the ride to be stopped."

A spokeswoman for the park said: "The safety of patrons at the Show is paramount and we have shut down the kids' Free Fall ride following a reported issue with a harness.

"The safety systems of the ride functioned well to prevent any injury occurring and the ride will not operate again until a full investigation has been completed and the ride has been approved by specialist engineers."