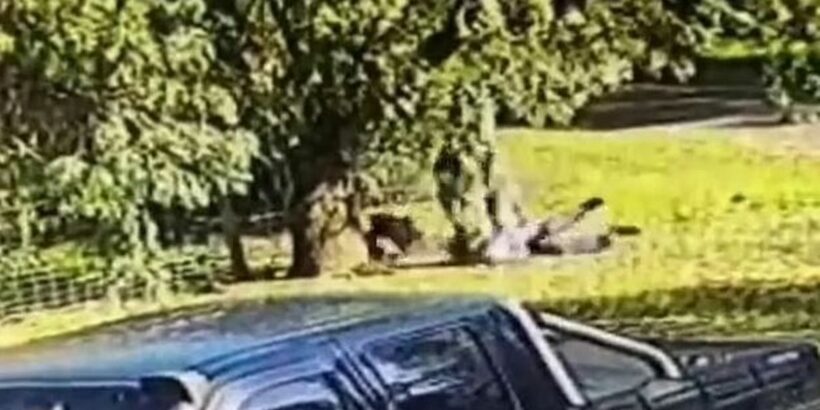 A man 'body slammed' a kangaroo after it began attacking him — and has lived to tell the tale.

The terrifying animal encounter captured on CCTV shows victim Cliff Des running through a neighbourhood as he frantically attempts to escapes the crazed marsupial in New South Wales, Australia.

He manages to fend the kangaroo off for a couple of second with a tree branch, but before long it pushes him to the ground and begins its assault.

It then leaps forwards before moving back to land several punches on the man.

His dog then intervenes in an attempt to protect its owner as the roo's attacks intensify, before quickly pulling back.

A number of blows are exchanged as the man moves in towards the beast and he eventually manages to pull it down by its foot.

He then manages to successfully pin the kangaroo to the ground as the dog returns to the scene, apparently sensing victory.

Speaking to Australia's Today programme, Cliff said he had become entangled in the Man vs Roo fracas after witnessing the beast trying to grab his dogs in the front garden.

He said: "It was a six-foot mad roo trying to rip my little dogs out of the yard. I went near it, about 30-foot away to try to shoo it away but it didn't want to go away."

"I thought this guy means business, he was going to mongrel me if I didn't, I took him to the ground."

He added that injuries sustained from the kangaroo included being bitten on the finger, scratched on the head, taking a claw "about an inch-and-a-half" through his back leg and having his trousers torn "down to the cuff."

Cliff has however managed to keep a sense of humour despite his close shave.

Asked by the television host whether the kangaroo might have been showing interest in him, he joked: "Perhaps I'm that good looking he's mistaken me as one of his girls".