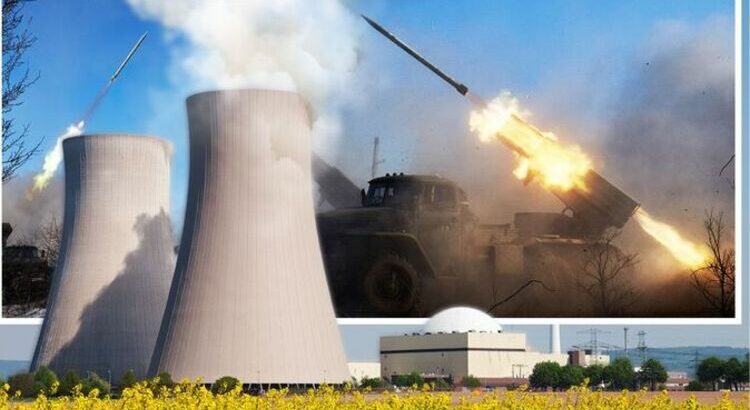 A conflict expert warned the nuclear reactor sites are not built to operate in conflict zones and said there could be “serious consequences” if a power outage or stray missile hit any one of the 15 sites.

On just the second day of the invasion, Russian forces seized the Chernobyl site causing widespread panic over the possibility of another nuclear disaster.

The seizing of the site by the Russian military caused President Volodymyr Zelensky to tweet: “Our defenders are giving their lives so that the tragedy of 1986 will not be repeated.”

However, experts say the Russian military is unlikely to purposely target Ukrainian reactors.

Dr Ross Peel, a researcher at the Department of War Studies at King’s College London, told Express.co.uk: “There is nothing in Chernobyl that Russia doesn’t already possess in larger quantities.

“If there were to be a release of material into the atmosphere then that’s going to drift around and potentially harm people back home in Russia”.

Dr Peel believed the seizing of Chernobyl was “partly a geographical thing” as it’s close to the Belarusian border and “partly to keep it safe” from any potential breach that could cause damage to Russia.

He warned that the country’s 15 operating nuclear reactors are the main cause for concern as they “are not designed to operate in conflict zones”, and risk being hit as the war rages on.

The war expert revealed that to operate safely, nuclear power plants need access to off-site electricity, water and workers must be able to carry out safety operations. He said “if any of those things are disrupted then it puts the reactors at risk”.

The absence of these requirements is what caused the Fukushima disaster in 2011.

Dr Peel told Express.co.uk: “My concern would be that if these reactors are unable to access those things to operate safely, even when shut down, it could have serious consequences”.

However, Ukrainian officials maintain that they have control of the facility itself – which is the largest nuclear plant in Europe – and they confirmed their military is on standby should anything escalate.

The revelations prompted the IAEA to swiftly hold a meeting in Vienna on Wednesday just hours after Russian officials claimed they had control of access to the site.

At the meeting, Rafael Mariano Grossi, the Director-General of the IEAE, told governors: “The situation in Ukraine is unprecedented and I continue to be gravely concerned.

“It is the first time a military conflict is happening amidst the facilities of a large, established nuclear power program, which in this case also include the site of the 1986 accident at the Chernobyl Nuclear Power Plant.”

In a statement to Russian officials, the atomic energy agency urged that they avoid combat near the country’s 15 nuclear reactors, which they warned could escalate the situation into an atomic-safety incident.