Emmanuel Macron greeted three hostages rescued from a Burkina Faso militant camp as they arrived in Paris today as they paid tribute to the two French special forces commandos who died ‘freeing them from hell’.

The French president spoke to the hostages as they disembarked from the plane sent to fetch them at the Villacourblay military airport south west of Paris.

They hailed the sacrifice made by naval officers Cédric de Pierrepont and Alain Bertoncello who were killed during the military operation.

Mr Lassimouillas said: ‘All our thoughts go to the families of the soldiers and to the soldiers who lost their lives to free us from this hell. 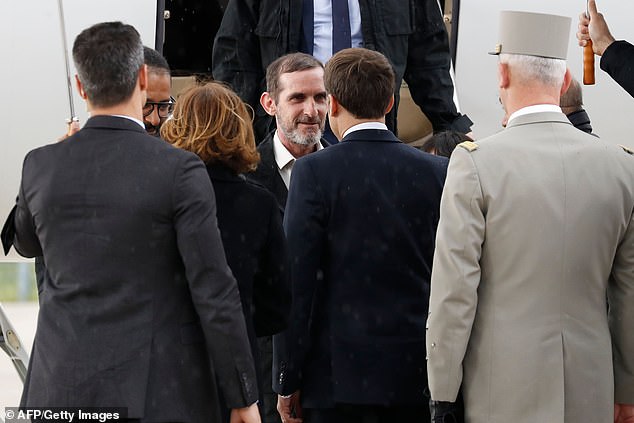 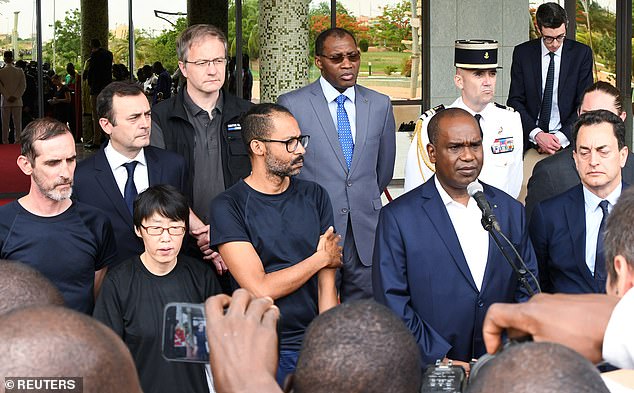 In their first appearance since being freed in the early hours of Friday, Frenchmen Laurent Lassimouillas (first row third from left) and Patrick Picque (far left) and an unidentified South Korean (send from left) woman spoke on the steps of Kosyam Presidential Palace in Ouagadougou (Foreign Minister Alpha Barry with microphone) 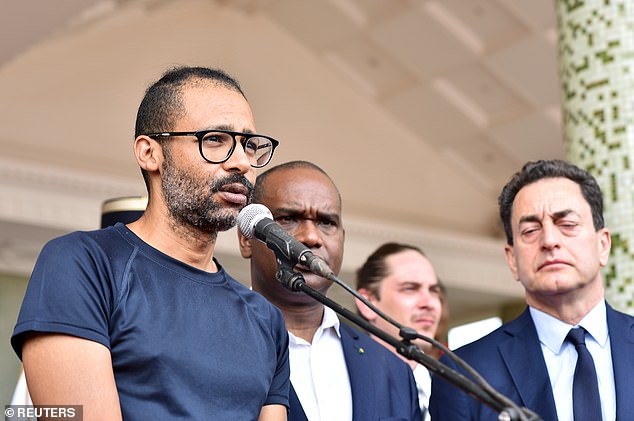 ‘We wanted to present our condolences right away to those families because we feel ambivalent about everything that happened to us.’

An American woman who had been kidnapped was also liberated by the commandos, but is already being flown back to the United States.

Lassimouillas also expressed regret over the death of the Beninese park guide, who was killed when the French two tourists were snatched while on safari in northern Benin before being bundled across the border into Burkina Faso.

The men, both music teachers, are expected to travel back to France on Sunday.

French officials said on Friday that it was not yet clear who had kidnapped them in Benin but described their captors in Burkina Faso as ‘terrorists’ who planned to hand them over to an al Qaeda affiliate in neighbouring Mali. 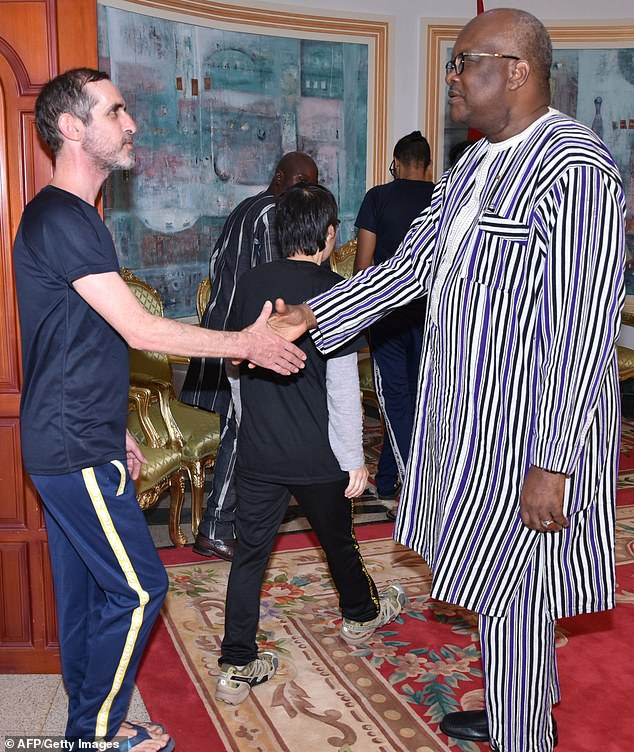 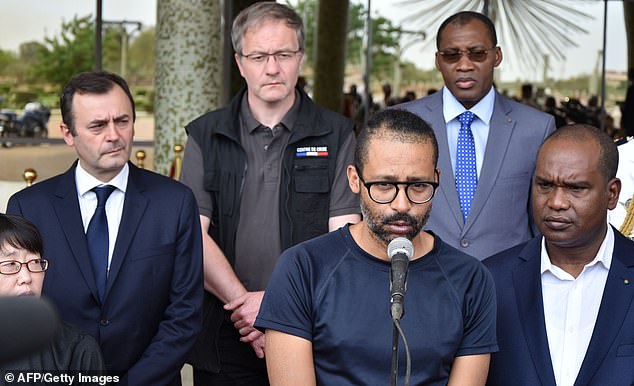 Mr Lassimouillas said: ‘All our thoughts go to the families of the soldiers and to the soldiers who lost their lives to free us from this hell’ 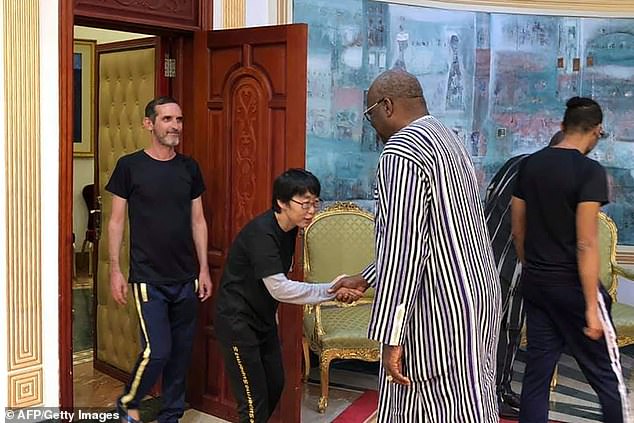 After their meeting with the President of Burkina Faso, the hostages are all expected to be welcomed by French President Emmanuel Macron at a military airport outside Paris later today

The operation took place in a bid to free two French tourists, Patrick Picque and Laurent Lassimouillas, who had disappeared in the remote Pendjari National Park in Benin on May 1.

A statement from the Élysées Palace about the hostage raid said: ‘Their liberation was made possible by a military operation led by French forces overnight from Thursday to Friday in northern Burkina Faso.

‘During the operation two soldiers were killed in action, Cédric de Pierrepont and Alain Bertoncello, both petty officers under the command of special operations.’

South Korea’s ambassador in Paris was unable to comment on the identity of the freed Korean national.

‘We do not have detailed information, but we are in close contact with French authorities. I can’t say anything now,’ Jongmoon Choi said. 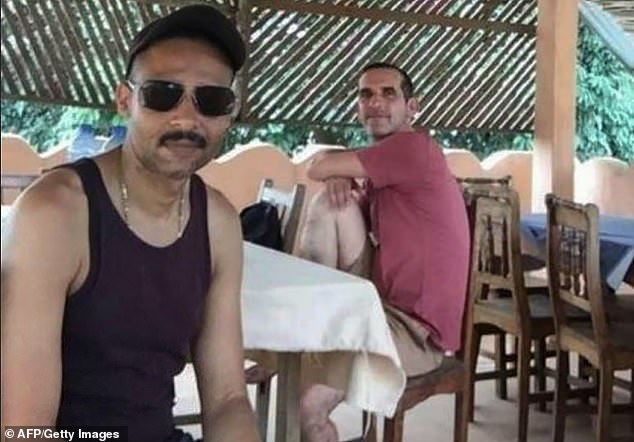 The operation took place in a bid to free two French tourists, Patrick Picque and Laurent Lassimouillas (pictured), who had disappeared in Benin, West Africa in May 1 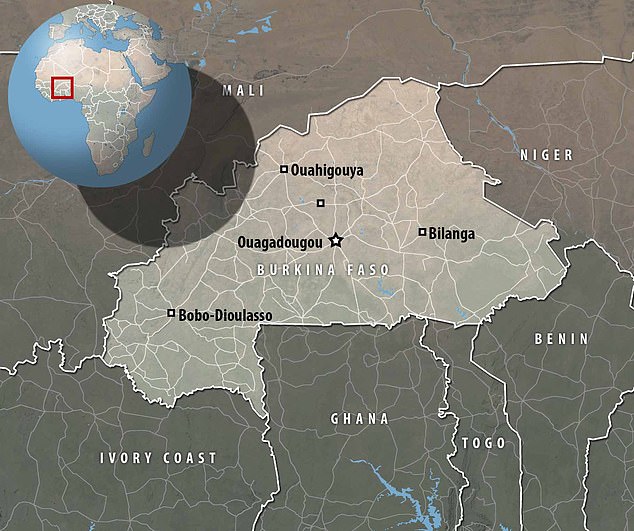 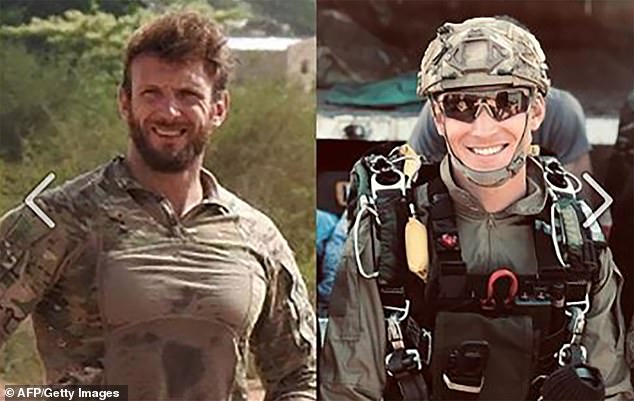 The US embassy in Paris was unavailable for comment.

‘[The] president wants to congratulate the French armed forces for the liberation of the hostages, and includes everyone who worked alongside them,’ a statement from the presidency said.

‘He bows with emotion and solemnity before the sacrifice of our two soldiers who gave their lives to save those of our citizens.’

Admiral Christophe Prazuck, chief of staff of the French navy, said he admired the soldiers’ courage.

He said yesterday: ‘Cédric de Pierrepont and Alain Bertoncello, of Commando Hubert, died last night in battle in a hostage release operation. I admire their courage, I share the pain of their families and their loved ones.’ 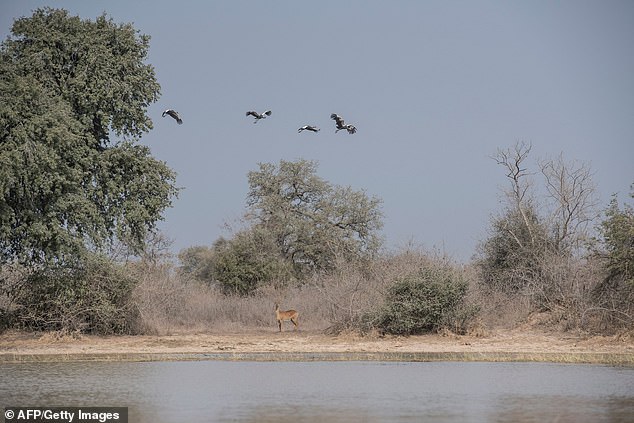 Pierrepont finished first in 47 of his basic training courses and reached the commando stage a year-and-a-half later, the navy said.

He won four medals and was a decorated ‘combat swimmer’ and gained accolades for operations in Sahel and Lebanon.

Bertoncello also won medals for swimming and took part in operations in the Seychelles and Qatar.

In a separate statement, Defence Minister Florence Parly thanked authorities in Benin and Burkina Faso, as well as the United States for its ‘precious support’ in the operation.

Neither statement indicated who was holding the tourists or the identity of the other two people who were released.

Islamic extremists have become increasingly active in Burkina Faso, raising worries the militants could be infiltrating northern Benin and neighboring Togo as well.