Hot dog! Hound learns to climb pool ladder so he can take a sneaky swim

A dog made quite a splash when he mastered climbing up the ladder of his owner’s swimming pool to cool off on his own.

Elliot the German Shepard-husky mix jumped into the pool in footage shot in Fayetteville, North Carolina, earlier this month.

The dog has always loved to swim according to his owner and the video was the first time she caught him going into the pool without her on camera.

In the video, Elliot begins to climb up the pool ladder, with one paw on the lowest rung before he brings the second one up.

He gets to the top of the ladder where he pauses to look at the water before lowering the front of his body in.

His owner bursts out laughing as he jumps into the water and begins to paddle around for around 40 seconds.

Then, incredibly, Elliot pulls himself out of the water and climbs down the ladder back into the garden. 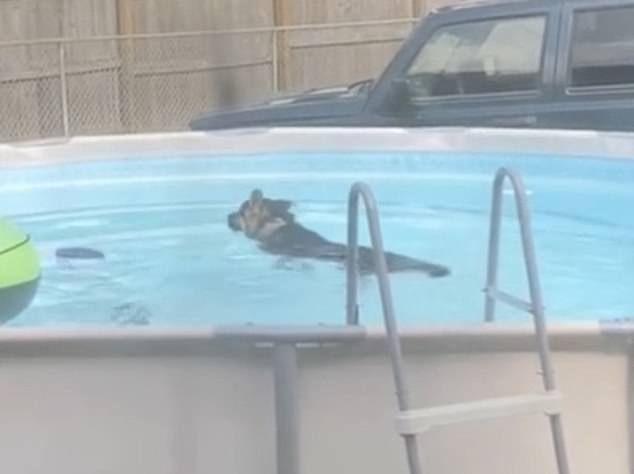 The video was shot on Sunday, June 7, by Elliot’s owner, when temperatures reached highs of 87.8F (31C) heat in Fayetteville.

She said: ‘I and my fiancé realized he loved swimming when he was young so we got a pool to share with him.

‘I finally caught him on camera hence my laughing in the video. Elliot is one unique and amazing dog and we are so happy to have him.’