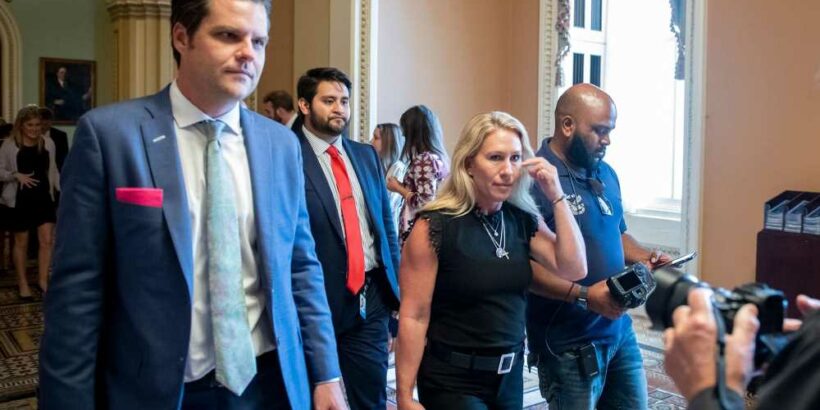 us house of representatives

Dozens of GOP members of Congress and their staffers crossed the Capitol Thursday, marching onto the Senate floor to protest the recently reinstituted mask mandate in the House of Representatives.

Capitol Attending Physician Dr. Brian Monahan announced late Tuesday that masks were once again required in the House chamber, committee rooms and office buildings. Monahan’s announcement came hours after the Centers for Disease Control and Prevention (CDC) recommended indoor mask mandates regardless of vaccination status in most areas of the US.

Republicans who took part in the protest told reporters they wanted to highlight the differences between the House and the Senate, which has no mask requirement.

Lawmakers were further enraged Thursday after another protest participant, Rep. Kat Cammack (R-Fla.) tweeted out a bulletin for police stating that visitors and House staff members who declined to wear masks or leave the premises when asked were subject to arrest. US Capitol Police responded to the backlash by tweeting a statement that “there is no reason it should ever come to someone being arrested.”

The Republicans timed their arrival on the Senate floor to coincide with speeches by Sens. Mike Lee (R-Utah), Marsha Blackburn (R-Tenn.), and Ted Cruz (R-Texas) bashing the re-imposed mandate as well as the revised CDC guidance.

“There is no evidence, none, to suggest that yet another about-face on masking is going to keep people healthier, is going to make them healthier …” added Blackburn. “So let’s call it what it is: This is left-wing hysteria. This is hysteria.”

McCarthy responded with a blistering speech on the House floor, accusing Pelosi and other Democrats of “hypocrisy.”

It’s kind of like telling America you can’t go get your hair cut, but you get caught on camera because you do it,” said the minority leader, referencing the Speaker’s maskless stop at a hair salon last year.

Thursday afternoon, Washington, DC Mayor Muriel Bowser said that the city would re-impose its own indoor mask mandate, regardless of vaccination status, effective on Saturday.