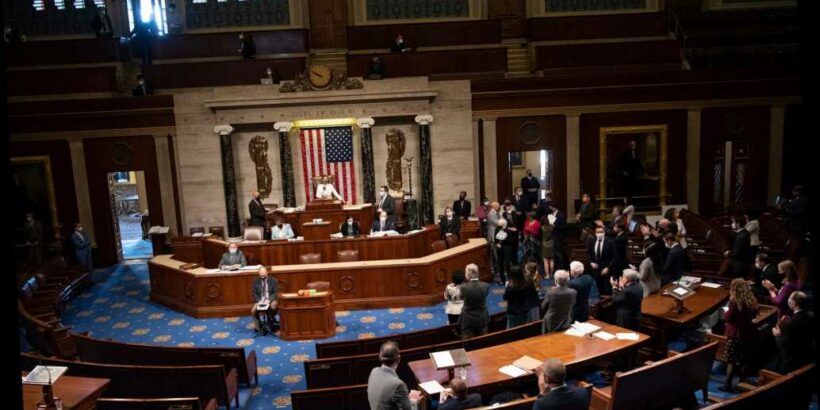 A crisis Biden wants to happen

The House of Representatives will debate two bills aimed at reforming the US immigration system next week, as Republican leaders slam President Biden for allowing the crisis at the southern border to spiral out of control.

Hordes of Central American migrants — including thousands of unaccompanied children — have rushed across in recent weeks, a crisis that the White House’s coordinator on the border conceded Wednesday is presumably tied to messaging from the Biden administration.

Next week, the House will debate two bills aimed at fixing “our broken immigration system,” according to a schedule released Thursday by House Majority Leader Steny Hoyer (D-Md.).

One, the American Dream and Promise Act, would establish a path to citizenship for millions of young illegal immigrants, including those afforded temporary protected status dubbed “Dreamers.”

The other, the Farm Workforce Modernization Act, would establish a pathway for illegal migrant farm workers to secure legal status.

The attempts at reform come as GOP leaders are blasting Biden for his failure to address the growing humanitarian and security crisis at the border.

“President Biden announced that it was his priority to offer citizenship for 11 million undocumented immigrants,” said House Minority Leader Kevin McCarthy (R-Calif.) during a Thursday press briefing. “What did he think would happen?”

McCarthy said that he requested a meeting with the president last week to discuss border security, but has yet to receive a response.

“Last week I sent a letter to the president asking to sit down with him, to work on ideas to reverse some of the misuse and misdirected policies that he had attempted at the beginning in creating this crisis,” he said. “As of this day he has not answered our letter to attempt to meet.”

Meanwhile, Texas Republican Rep. Troy Nehls, a former sheriff, accused the Biden administration of “almost aiding and abetting human trafficking” by not having greater oversight over what happens to undocumented children shuttled from cramped border detainment centers to shelters across the nation.

“My concern is that many of these young people are being released into our cities across our great nation to individuals that may not have the children’s best interests at heart,” Nehls told “Fox & Friends” on Thursday.

“And then it’s law enforcement’s responsibility to go up there and clean up this mess when these kids are being trafficked,” Nehls continued. “And I think this administration is almost aiding and abetting in human trafficking.”

While refusing to characterize the situation as a crisis, White House Press Secretary Jen Psaki has acknowledged that the Biden administration could be doing more to deter illegal immigration, which has surged since Inauguration Day as deportations and arrests by Immigration and Customs Enforcement have dropped.