Furious row explodes in Asda car park as two women scream abuse at each other over parking on white lines with one shouting ‘How am I supposed to f****** get out?’ before spitting at rival

An explosive row broke out between two women in an Asda car park after one of them struggled to get into her car.

Courtney Roseweir, 25, found an angry woman struggling to climb into her own vehicle in Ashton-under-Lyne, Greater Manchester on Sunday.

The enraged woman, who has locally identified as fitness trainer Becki Peel Etchells, appears to charge at Courtney before the pair exchange insults. 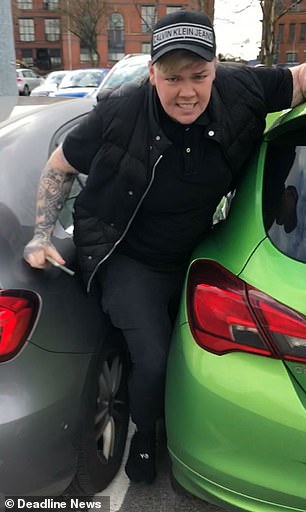 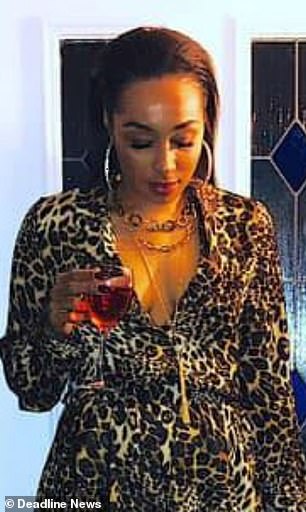 One of the women, identified as Becki Peel Etchells (left), dashes at camerawoman Courtney Roseweir (right) during the explosive row

As Ms Etchells drives off she makes an obscene gesture to Ms Roseweir and then spits out of the window.

Ms Roseweir, from Manchester, posted the video on social media later that day saying: ‘This girl pulled up in her parking space and I pulled up second. She then proceeded to scream out of her window “how am I suppose to f****** get out of there.”

‘Now as you can see she clearly doesn’t know how to park as she is parked on the white line. I simply told her [if] she parked her car straight, she would have no problem getting out.

‘[She] continued to slam her car door into mine, spit at me, swing for me numerous times and call me all the names under the sun. 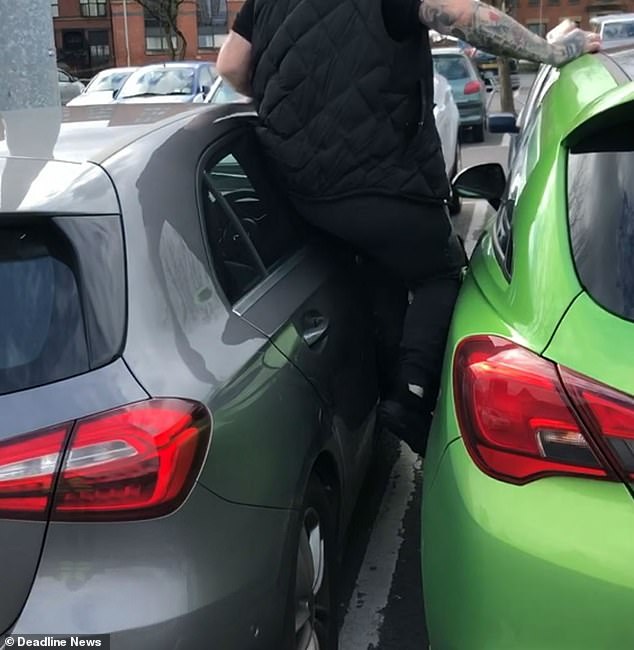 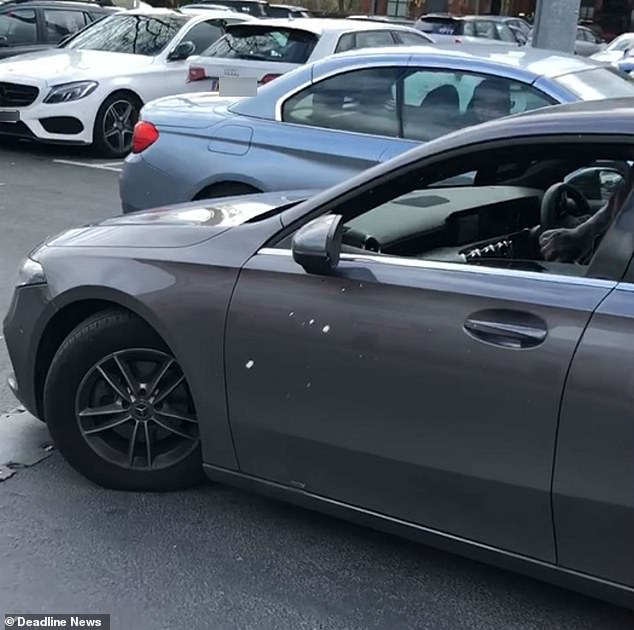 ‘Not only that, she also had a child in the back seat whilst all this was going on. What is this world we live in. Where you can’t even stop at Asda for a f****** lasagne for your dinner at work without encountering such behaviour.’

The video shows Ms Etchells trying to get into her car through the driver’s side of the vehicle by standing on Ms Roseweir’s green Corsa.

Ms Roseweir then walks back to her vehicle and once again tries to get through the drivers side of car by standing on Ms Roseweir’s Corsa.

The fitness instructor lashes out again, saying ‘move your f****** car, scruffy c***’, to which Ms Roseweir replies ‘no!’ 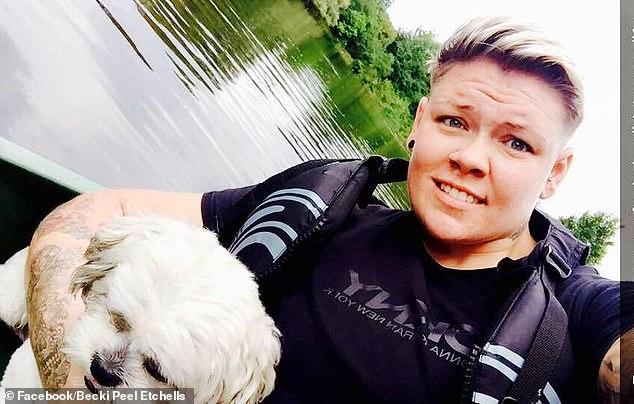 Ms Etchells says ‘are you taking the p***?’ and starts bounding towards Ms Roseweir, who shouts back ‘What are you doing you f****** k***head’ 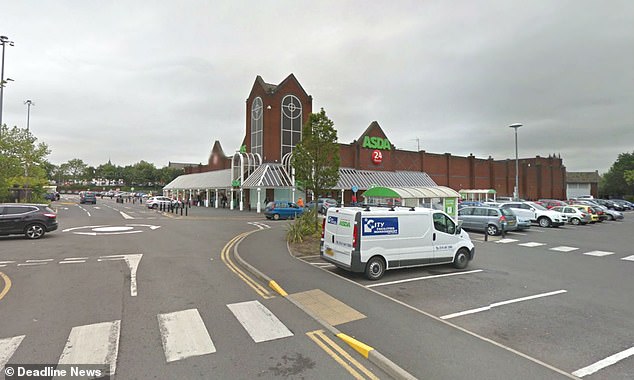 The incident happened in an Asda car park in Ashton-under-Lyne, Greater Manchester, on Sunday afternoon

The camerawoman then moves back showing both cars being mounted by Ms Etchells as she struggles to get into her driver’s seat.

Ms Etchells’ car appears to be parked on the white line of a parking bay leaving only a small gap for her to get into.

She reverses out of her space and stops next to Ms Roseweir before she is seen swearing through her window and winding it down to spit at her.

Many people felt it was easier to just park the car again or get in through the passenger door.

One commenter said: ‘So sorry you had to go through that babe, your parking is absolutely fine it’s common sense to just repark.’ 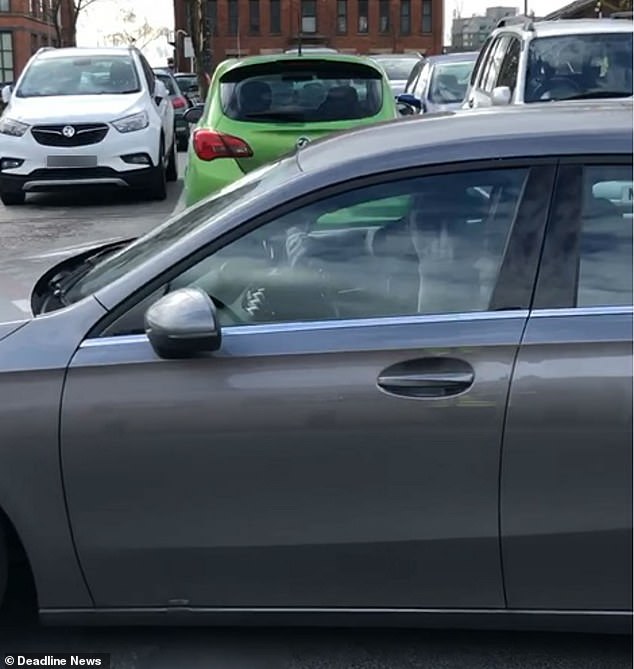 James Gathergood added: ‘I can’t even drive and I know which car’s not parked properly.’

Darren Brooks: wrote: ‘A bit of common sense if they had just arrived was to not get out of the car and just reverse out a bit and go back in and done. Less than a minute and everyone has a happy day. Some people need to learn to just think things through.’

Cal Robinson said: ‘Why didn’t she just get in the passenger door and jump over?’

Mark Mulligan added: ‘Why didn’t they just go through the passenger side. Problem solved.’

Airline worker Ms Roseweir today said that she was shocked to find the woman shouting at her.

She said: ‘I thought the fact that she spat not once but twice was disgusting! I wouldn’t even spit at someone I hate. It’s awful!’

Ms Etchells posted in the comments on social media claiming to be the other woman in the video.

She commented: ‘Definitely wasn’t two kids in my car.’

Ms Roseweir said she did not report the incident to the police.