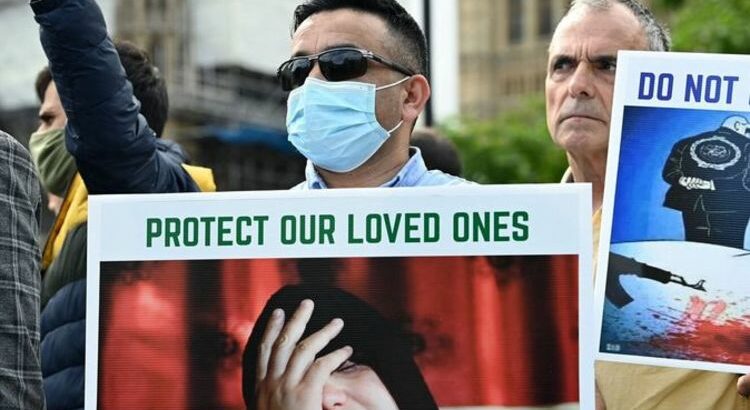 Kabul: James Heappey on leaving people behind in Afghanistan

Western leaders are abdicating their responsibilities in Afghanistan, people claim, as they end decades of military occupation. The Taliban overran Kabul over the weekend, filling the vacuum left by the US and its allies and endangering locals who have aided them for years. Harsh criticism has landed on national leaders – Boris Johnson and his cabinet among them – as they risk cutting rescue operations without evacuating their fair share of vulnerable Afghans.

How many people has the UK evacuated from Afghanistan?

Western nations have spent decades in Afghanistan, clashing with the Taliban as they hosted al-Queda following the 9/11 attacks in 2001.

Residents had translated for and guided troops during their occupation and now require refuge from the Taliban as it hopes to route the American allied presence.

In a bid to meet their responsibilities, each invading nation agreed to take in and resettle a bare minimum of Afghan refugees.

The US, Canada and European countries have agreed to welcome the following numbers of Afghan refugees:

The UK Government’s pledge comes after officials also promised to evacuate 7,000 Britons and their Afghan staff.

But according to armed forces minister James Heappey, the country’s time is now limited.

The military managed to evacuate 963 people from Kabul on Thursday and aims to take another 1,000 today.

Their time is limited, however, by an “air bridge” to Kabul airport.

The bridge could last between two and 10 days, according to Mr Heappey, meaning the Government can’t stay until “absolutely everyone is out”.

Failing to evacuate enough people before time runs out would see the PM’s pledge dashed a matter of days after launch.

At the time, the Prime Minister said the UK owes a “debt of gratitude” to military aides.

DON’T MISS
POLL: Should Raab resign as crucial Afghanistan phone call not made? – POLL
Will the Afghanistan crisis result in another refugee crisis? – EXPLAINER
UK troops dealing with ‘hundreds and hundreds’ of Afghans meant for US – ANALYSIS

He added he was “proud” to place the programme, despite accusations officials told 100 British embassy guards they are not eligible for Government protection.

But some planes are leaving without meeting their capacity, according to one Twitter poster.

British expat Paul Farthing wrote on Twitter that his wife Kaisa had managed to catch a Norwegian flight but that the “aircraft is empty”.

Now, a Whitehall source told The Times, the UK may opt for a rapid 24-hour withdrawal from the country.

The proposal is one of three, alongside a several-day-long “medium” withdrawal and a more organised, longer-term operation.

Despite favouring the long-term option for safety purposes, the source added the UK is in “Washington’s hands”.

British soldiers and officials have previously spoken of trouble communicating with their US counterparts, with none the wiser on the length of their stay.