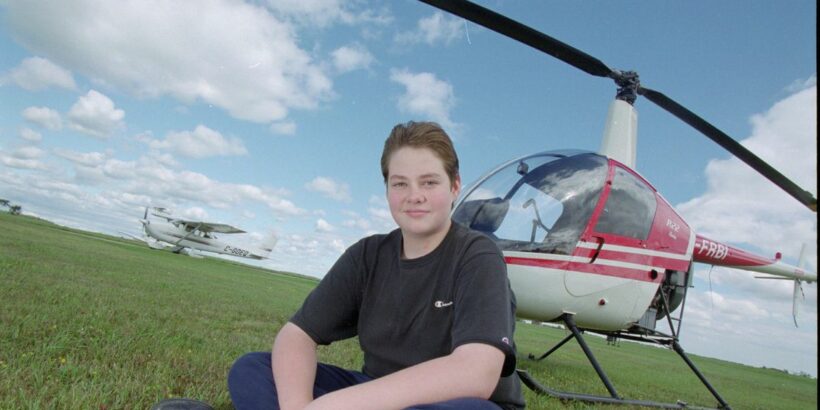 As a teenager, rich kid Dellen Millard had the world quite literally at his finger tips.

At the age of 14, he had become the youngest Canadian to singlehandedly fly a helicopter and an aeroplane on the same day.

As the heir to his family’s fortune, he owned several million-dollar properties and a fleet of luxury cars by the age of 27 and worked for his father, Wayne, in the family’s aviation business.

But he won’t be remembered for his record-breaking flight or inheriting his family’s wealth.

Instead, multi-millionaire Millard will only go down in history as one of the world’s most notorious and calculating serial killers.

In December 2018, at the age of 33, Millard was sentenced to life in prison for first-degree murder – for the third time.

This third consecutive sentence meant he would now serve a minimum of 75 years in jail. Parole will not be granted until at least 2088, by which time Millard will be 103 years old.

It related to the 2012 murder of his own father, who he shot through the eye in the family’s lavish Toronto home.

Millard had originally claimed it was suicide but when the case was reopened, the truth eventually emerged.

Millard said he had “discovered” his dad's body but instead of calling 911 straight away, he called his mother, who had been divorced from his father for more than a decade.

Phone records revealed that had he actually travelled back to his father’s house hours before he said he found the body, and a gun purchased illegally by Millard was found next to his father. Millard’s DNA was all over the weapon.

Originally, Wayne Millard’s death was ruled as a suicide but the case was reinvestigated after Millard had been charged with two other murders with his friend and accomplice, Mark Smich.

Born in 1985, Millard junior lived up to the stereotypical playboy image by hosting pool parties at his luxurious mansion and indulging in off-road racing.

His parents divorced when he was a teenager and he had cultivated something of an eccentric persona at his elite private school, where his father would drop him off in a dusty old pickup truck. Schoolfriends say Millard would walk the corridors of the school snacking on bone-shaped dog biscuits.

But this rich teenager’s dark side soon revealed itself in May 2013 when he was charged with the death of Tim Bosma, a father whose only mistake was trying to sell the diesel truck he and his wife Sharlene had posted online.

Millard and Smich, whose early friendship was forged over weed and computer games in Millard’s basement, took the truck for a test drive with Bosma.

There was a struggle in the truck and Bosma was shot dead and the body incinerated. Who pulled the trigger remains a mystery but both Millard and Smich were sentenced sentenced to life in prison, with no parole eligibility for 25 years.

Millard and Smich were then convicted of the murder of Laura Babcock, a former girlfriend of Millard’s who was last seen alive in July 2012.

Babcock had sent taunting texts to Millard’s new girlfriend, Christina Noudga, claiming she was still sleeping with her ex-boyfriend.

During the trial for Babcock's murder, prosecutors alleged that Millard killed Babcock to get out of the love triangle and her remains have never been recovered. Millard and Smich were again sentenced to life in prison, with the parole ineligibility period of 25 years to be served consecutively with that of the previous 25-year sentence.

Although he had all the trappings of a playboy lifestyle including millions of dollars worth of property, Millard transferred most of this portfolio to his mother after his arrest.

Millard had inherited a fortune when his father died, but his assets were frozen once he was charged with his murder. Facing a minimum of 75 years in jail, it looks highly unlikely that he’ll ever see his vast inheritance again.