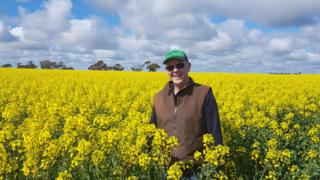 Australia’s relationship with China is not a happy one at the moment. Canberra’s push for answers on the pandemic’s origins has angered Beijing. In the past month it has put in place some bruising sanctions and travel warnings. Many have urged Australia to reduce its economic reliance on China, but is this really an option?

“I love the Chinese,” says Chris Kelly, an Australian who’s sown barley on his family farm for decades.

“Love them. Every barley grower in Australia loves the Chinese because they’ve made us wealthy.”

Last year Australia produced over 8 million tonnes of the golden grain used in beer and pig feed. China bought more than half – at a premium price.

But last month, China imposed an 80% tariff on Australian barley. It came after Canberra, echoing the US, called for an investigation into Covid-19’s origins – a move that Beijing labelled “politically motivated”.

China has since suspended some major Australian beef imports, and warned students and tourists against travelling to the “racist” country. This week, in a secretive process, it sentenced an Australian man to death for drug smuggling.

It’s fuelled frenzied discussion in Australia: Is China retaliating against accusations it mishandled the coronavirus? Could this be the start of a trade war like that seen between the US and China?

Like other liberal democracies, Australia is increasingly challenged by the need to balance its economic dependence on China and its own values and interests.

This friction isn’t unique to Australia. Canada, Japan and South Korea – among others – have seen economic pushback from China, allegedly for political reasons.

But Australia’s economic dependence on China is greater than many nations.

For the past decade, China has been Australia’s largest trading partner and now accounts for 32.6% of its exports.

Australia’s mines have delivered iron ore, coal and gas to fuel China’s growth – preferred to rivals in Brazil for their quality and geographic proximity. It’s a deal that benefits both nations.

Other sectors – education, tourism, agriculture, wine – have also flourished in the Chinese market. But like barley, they are not as exclusive to Australia and so more vulnerable to political tension, economists say.

Push to explore other options

This has all intensified debate over whether Australia has become too reliant on China and should look to other trading partners.

It needs to drastically strengthen relations with its Asian neighbours, says Dr Lai-Ha Chan, a political scientist at the University of Technology, Sydney.

It has made efforts, she says, noting Prime Minister Scott Morrison had scheduled a trip to India this year and made repeated entreaties to PM Narendra Modi. His visit to Vietnam last year – the first by an Australian leader in 25 years – was recognition of its rising star as a market economy, she adds. Australia’s ecotourism and university sectors have been actively courting both nations.

Dr Chan suggests Australia could rely on a combination of those countries – plus Indonesia, Japan and South Korea – to lessen reliance on China.

Not all are among Australia’s top 10 trading partners currently; in many cases, there is no existing free trade agreement.

But economists dispute the idea that the Chinese market can easily be replaced.

“There are no other options that come anywhere near to making up China’s numbers,” says Prof Jane Golley, a China economy specialist at the Australian National University.

Government attempts at intervention (a practice seen in Japan), would just be a waste of money, economists say.

“It’s a bit strange for the government to tell companies you can’t sell to the Chinese or you have to sell more to other countries when other countries simply aren’t trying to buy,” Dr Shiro Armstrong, an East Asia specialist, told the BBC.

“Sure, they’ve made a little difference on the edges. But it’s the market which matters here.”

Even more opportunities with China?

Prof Golley says she finds calls by some security analysts to turn away from China – covered heavily by the media – “depressing”.

“I wonder if the man on the street who reads the headline and thinks we need to diversify from China – I always wonder if they think through what that could mean and how it might lead to them or their children not having jobs in the future.”

Australia would be better served looking at the bigger picture, she and others argue.

It is far less reliant on exports (20% of GDP) than many nations. But those proceeds flow directly into jobs and welfare, making China a significant driver of Australian prosperity.

Richard Maude, a former foreign policy head in the Australian government, says it is vital that Australia can co-operate with China on food security, energy and climate change.

Mr Van Der Kley predicts others markets will also emerge for Australia as China’s middle class ages, particularly in sectors such as health care and nursing.

The significant Chinese diaspora in Australia should not be overlooked, others say. Australia is home to more than 1.2 million people of Chinese ancestry, many of whom only migrated in the last decade – ensuring deep community links. Chinese consumers continue to favour Australia for education and tourism, partly for this reason.

But on the political level, there’s a consensus that Canberra-Beijing relations have sunk to their lowest ebb in decades. It has been three years since a bilateral meeting of leaders, despite Australia’s repeated requests.

Prof Golley says the government should work hard to help Australian businesses engage with Chinese counterparts, but fears this is being damaged by the “deteriorating” political relationship.

Others say Australia needs to be more strategic in its diplomacy – for example it could criticise China from within a group of like-minded nations rather than striking out on its own. They also suggest hawks within the government should be reined in by Prime Minister Scott Morrison.

Ultimately, though, slick diplomacy is just “packaging”, says Mr Maude, the former diplomat: “China will still often object to what’s inside, no matter how well wrapped.”

Mr Morrison has said: “We’re just being Australians. We have done nothing nor sought to do anything that is inconsistent with our values, or have sought to be in any way hostile to our partnership with China.”

Australia hasn’t changed but China fundamentally has, says Mr Maude. He argues that Beijing has become more assertive and authoritarian. Canberra – like other democracies – can no longer overlook political reality for economic gains.

“The risk of economic retaliation will be a permanent feature of the ‘new normal’ in the relationship,” he says. “We can’t have our cake and eat it too.”

But for Mr Kelly on his barley farm, he feels like the proverbial canary down a gold mine.

“We’ve been feeling anxious for years – this has been going on for a while,” he says. “It just feels like the worst-case scenario has arrived.”